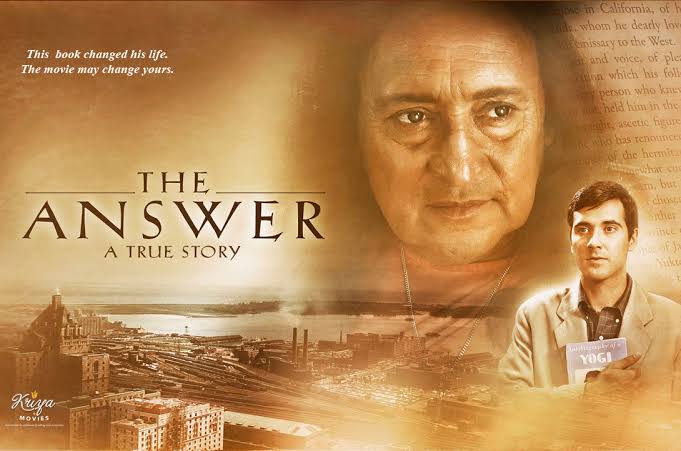 “There is true kinship only with God,” says the film’s young protagonist Walter as he rapturously ricochets  towards the  centre of his cosmos, the spiritual guru Paramhansa Yogananda, played with a  beguiling blend of  the haughty and  the naughty by the extraordinarily talented Victor Bannerjee.

It’s  been quite a while since we saw Bannerjee in action. For those who have forgotten what miraculous alchemy  he can perform  with his personality , here is  proof in the plotting.  Bannerjee embraces  Yogananda’s  godliness  unconditionally and makes the man’s teachings  his own. So intimately is  Bannerjee shown connected with the rather unorthodox  beliefs and thoughts of Yogananda(this Godman brought Jesus Christ into the same line of vision as the  Bhagvat Gita) that we are soon left watching not  the actor but the  mesmerizing Saint with the  childlike smile and his artless connectivity with the Universe.

However this  is not a bio-pic about Yogananda. It is about his relationship with his  favourite disciple Walter,an American seeker of  the truth,  played by Leonadis Gulaptis, a young untrained actor with the bluest eyes on this  side of the Pacfic Ocean. Gulaptis plays  the beloved disciple with a  mixture of awe and  acquiescence. It is almost  like what  Ranjeesh shared  with Ma Sheela except  that there is no sex between the Godman and his  disciple in this case, though early  in the story when Yogananda meets Walter for the first time  the latter confesses sex is a weakness.

Though patchy in parts and low on  production values,  the  central relationship between  the Guru and the  disciple  holds up with tremendous persuasiveness in this evangelical film. There are moments of spiritual awakening  in the plot done with such integrity that they move you to tears. While the supporting cast  is  frequently amateurish  Bannerjee and  Gulaptis  create a certain kind of rare and  precious frisson and magic on screen that must be seen  to be believed. The  film is worth  our time  even if some of us are non-believers.