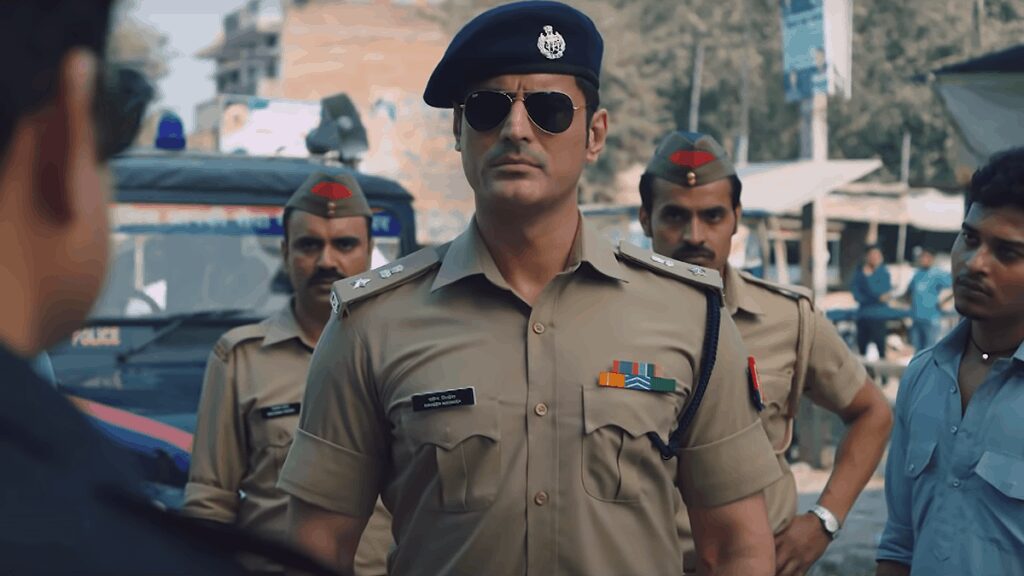 Once upon  a time in the wasteland that was the cow belt , there lived certain lawmakers who took their jobs seriously and made every effort to eradicate  crime  from Bihar and Uttar Pradesh. At present, the crime rates  in the two States is relatively low. This doesn’t prevent   digital directors to  repeatedly run off into the  Northern region for violent bouts  of lawless anger, anchored  by  what  looks  reams  of raw aggression with  nary a  break  for any genuine exploration of the emotional factors  that trigger  off  the  characters’ violent  behaviour.

One   of the salient  villains in Season 2 of Bhaukaal  is Pinto  Pehelwan,played with potbellied  acerbity  by Pradeep Nagar. What makes  Pinto so ruthless? Is it the  fiercely competitive  spirit  of gang wars:  the  his-gun-is-bigger-than-mine  performing  anxiety?  Be as  it might—and might, as we all know  is right in gang wars—Pinto and his  perverse violence occupies  considerable space  in the  10-episode bloodbath.

Pinto  is  almost always shown  in  the  company  of  his  sibling  Chintu, played by Siddhant Kapoor who is typecast  as a slimy smalltime  sociopath  a  role he can perform with his eyes closed.I wonder what Siddhant will tell his children when  they sit down to watch what their father did.

The actors  in Bhaukaal 2  know their job. They  go for the  kill with  sanguinary skill. There are so many villains  on endless mass-killing  sprees it becomes hard  to  a pick a side. If Pinto/Chintu are  despicable, Ashfaq(a rival gangster  played with an interesting sliver of sophistication by Ajay Singh  Chaudhary) is  only slightly less loathsome. And  the late  Bikramjeet Kanwarpal(who passed away last year and to whom this series is  thoughtfully dedicated) as  Rana  the  quietly menacing criminal  politician, shows us who the real  boss is.

The  only important female role in this  maelstrom  of mayhem and machismo is Bidita Bag. As Nazneen who crosses  floors from one gang  to another via marriage  ,she  shows way too much cleavage  to be treated as one of the  sharpshooting  villains.

So topheavy is  the  villainous caucus  that I am afraid, the  our-cop hero Navin Sikhera   just doesn’t stand a  chance. He  and his  team of khak- clad praise-vardi  bravehearts  come across  as surprisingly lame   in comparison with the  villains whose bestial binge  of  badass butchery will make you roll your eyes, whenever they don’t make your stomachs  churn.

Mohit Raina’s  Sikhera  comes across as surprisingly ineffective. The pandemic seems  to have added some extra weight  to Raina’s  presence. I expected to see more of the agile  angry  lawmaker from Season 1. But this time  Sikhera  seems tired and  dissociated from the anarchy that rules Muazffarnagar.Maybe he secretly given up.

Though the  violence may at times seem  excessive Bhaukaal’s Season 2 brings the familiar tropes of  internecine  gangwars  in the cowbelt, all under the same heaving roof. There is  a sequence towards the end where we see the pernicious Pinto and his wife  cradling their baby in  their hands.The “baby”  is  actually just  a doll.

But at the  end of the show,  our cop-hero and his  wife are shown with a real baby.

Crime in this  way, is subconsciously shown  to be a self defeating  sterile road to  nowhere.If you want your lineage  to  continue  you know which side  you need  to be on, no matter how adventurous  the other  side may look. Otherwise you end  up with  no  legacy, only  a doll doubling  up as a  baby.