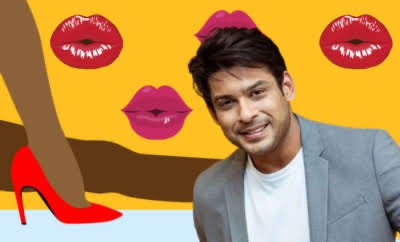 Not even a week old , and the new season  of  Bigg Boss  is showing signs  of  anxiety fatigue.The  effort to get eyeballs at any cost  hit an all-time low  in the  first week of telecast itself when four female contestants Pavitra Punia, Nikki Tamboli, Rubina Dilaik and Jasmin Bhasinwere asked to “seduce”  the resident-Cansanova   of reality television Siddharth Shukla.

The “task”  assigned  for the ladies to  earn themselves immunity from eviction not only smacks  of  misogyny it also  has  suspiciously pornographic  connotations: want to be spared from punishment, come please Daddy!

While being assigned  this  despicable  task the  ladies  couldn’t have been  unaware  of what the term  “seduction” means. So  if they are  pleading innocence(“Mujhe  toh pataa nahin tha  seduction kya hota hai Mummy ne kabhi bataya hi nahin”)    the ladies  cannot be given the benefit of  the  doubt.

It is highly disturbing  to see an endorsement  of such pseudo-coquettish behavior at a time when men  are  constantly being  pulled  up for inappropriate behavior, or that a responsible influencer  like Siddharth  Shukla could ever be  a part of such a deplorable and sleazy game  of  sham seduction.

During a conversation with this  writer some time ago Shukla had expressed the  highest respect  for the  other  gender.  “I would never  do anything  disrespectful  toward women. It’s just not in  my  DNA.I’ve been  brought up  to respect  men and women alike.”

And to now see  Mr Shukla being happily “seduced” by  a quartet  of  ladies. Quite  a shock.