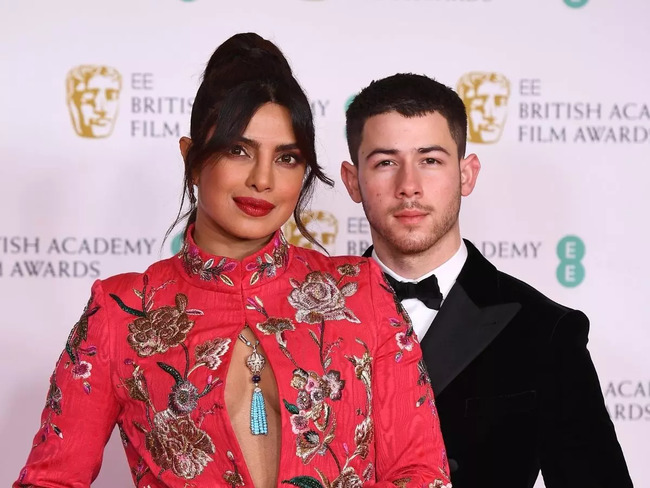 One  of  my favourite showbiz persons is finally a mother!  I am not the least surprised that Priyanka  Chopra -Jonas  has  become  a mother(by surrogacy, for  the record, though it’s nobody’s business). She had  it coming  for a  very long time.

I thought she would become a Mommy  immediately  after marriage. Priyanka  loves  kids,and more importantly, they love her  back. I’ve seen her interaction with  kid-fans first-hand. Kids can instinctively tell when  actors are faking it.For example there is  this  superstar-mom who grabs her kids only when the paps are  around. The rest  of the  time….Nanny teri morni ko more le gayi…The less said  the  better.

I can’t  imagine Priyanka playing Sonia Sahni  in Bobby(beta Rishi Kapoor  rared by Nanny Durga  Khote). Even  if , gode forbid, Priyanka was  suddenly inclined  to dump her baby into a Nanny’s  hired  godee, her  husband wouldn’t let her.  Nick belongs to a family of  4 siblings.  He has grown up in  a family filled with the laughter  of children. Nick loves children and I am  told he wanted  to be  a father  the soonest.

In fact  Nick is  even better  with  kids than Priyanka. His  niece Alena(brother Kevin Jones’ daughter) is  the apple of  Nick’s eye. The  little  girl is spoilt silly  by Uncle Nick.So possessive  is  Alena  about her favourite uncle  that Priyanka is  not allowed put her arms  around Nick when Alena is around.

Now I am  worried: who is  going to discipline  baby  Chopra-Jonas?  Both  the  parents will pamper  it  to no end.But then  if you  have Priyanka Chopra and Nick Jonas  for parents  you  had better be  prepared  to be pampered and spoilt.

I remember many conversations about parenthood  with Priyanka  in  the past. Being a mother  was  important to her  even when she  was just starting out in her career. Priyanka was willing to throw it  all  away  if she  found the  right partner  to  start her own  family.

“I’ve seen  my parents  being the  best parents  possible  to me  and my brother.We were  not denied anything. We were  brought up in an  environment where family mattered above  everything else,” Priyanka  once shared with me.

I’ve seen  her  at home in Mumbai mollycoddling her brother  Siddharth. Once  when Priyanka  and  I  were sitting  in her  livingroom  Siddharth(who must have been 15-16)  sauntered in with  a lollypop  in his mouth. A  bit  too old for that, I thought. Priyanka  voiced my thought and asked Siddharth to either get rid of  the  lollypop or go inside.

Go ahead, spoil your little bundle  of joy now.

Subhash Ghai’s Journey As A Filmmaker

Adivi Sesh: “Major as a project has been fundamentally transformational”