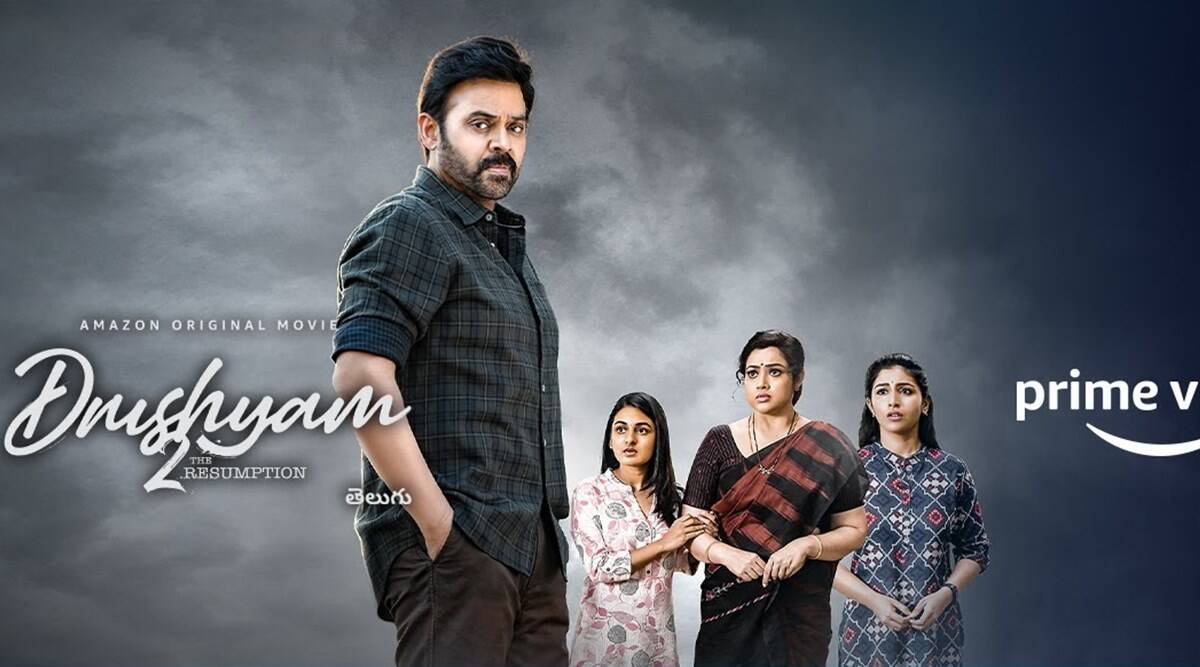 Drushyam 2: A  diligently  faithful remake  of a cult  film that I felt was overrated, is not quite what  one needs at the moment. Nonetheless, as far as  faithful remakes  go, Drushyam 2 reprising in Telugu, pretty much the whole scenario, lock stock and barrel,  from the original Malayalam  film,  is  a job competently done.

Veteran Venkatesh has lately been  seen in some socially relevant films, notably  Narappa(also on  Amazon) which was  a  more  flexible  remake of a Tamil  film Asuran.

Drushyam 2 doesn’t budge an inch from the Malayalam original. Which is  not a bad thing, considering the  plot’s watertight  alibi for a remake  is its protagonist’s watertight alibi for a murder that he  committed six year earlier, in the  first  part of the Drushyam /Drishyam   franchise.

For Rambabu(Venkatesh) it is  still family first.He will do anything to protect his wife and  daughters   from harm even if it means killing and burying a boy  who  harassed Rambabu’s daughter.

I have  never been   too fond  of the  plot’s Good Murderer –Bad  Murderer distinction that  writer  Jeetu Joseph makes .The thesis  of Joseph’s   dubious  morality  gets an even thornier thrust in Part  2 with cops who are made  to feel guilty for  trying to trick  Rambabu and his family  into  a confession as he gets away with murder, quite literally.

The  end-game in  Drushyam 2 is  all about  moving around the pieces  on  the chess board until the law enforcers are  check mated. In keeping  with the law-is-an-ass spirit  of  the original here too the  investigating cop is left fuming and  swearing to get Rambabu the  next time.

Sampath  Raj as   the investigating cop is a welcome addition to the original cast in  a film that adheres stubbornly to the original’s  (twisted) mindbend to the  extent  of  seeming  like a  blind copy. We can mute the  dialogues of  this Telugu  version  and it is interchangeable with the  Malayalam   original.

For me   the  main attraction of  the  unadventurous transition  from the  Malayalam original  to Telugu is the lead  performance. While Mohanlal in the Malayalam version  played the reluctant killer  as  an inscrutable  genius of sorts,  Venkatesh  is a more flustered guilt-ridden protagonist, a common man  wondering how  he got into this  uncommon situation.They are both film buffs.But in the  Malayalam  original  Mohanal  seemed a  fan of Mohanlal only. Vankatesh  plays  the  secret  killer with  a lack  of  smugness.

The  supporting cast is adequate though unremarkable , with a  bevy of junior artistes behaving as  if they are  street loiterers caught behaving like  a Shakespearean  chorus. Finally Drushyam  2 feels  like it’s  too clever for its own good. Getting away with  murder is all very fine. Gloating  about it is something else.