Echoes  Of  Violence Is A Damsel In Distress Tale Rebooted 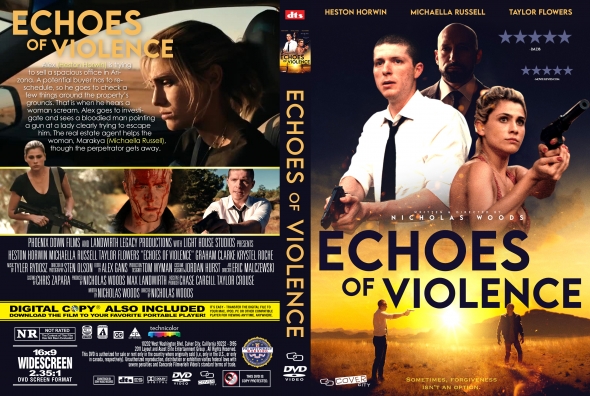 Echoes  Of Violence Review: Maybe  I  was  just bored. But  I saw humorous irony in  the name  of the actor who plays the  villain chasing the heroine across the Sedona desert.

His name is  Chase, real name. In the film I couldn’t care less what he  was called. I suspect even   the writers of this supposedly sinister yarn couldn’t care a damn what the  guy chasing the  heroine  is  called.

For all we  know the actor went through the  entire film being called by  his real name Chase. Because that’s what he does right till the end.For all  the  screechy tyres  and  paranoid wheels,nowhere did I feel any real danger lurking around  the heroine.

A  classic  Damsel in Distress dressed  up as a  woman  of contemporary  American, Marayka(Michaela Russell) is   the  cinematic equivalent  of  a trainwreck.  She can  only mean trouble  for  our  hero. A  sedate  real-estate agent named  Alex(Hestor Horwin)  the hero invites MsTrouble right into his home .Marayka, an immigrant on  the run , not only  convinces  Alex to  help her  get rid of  her tormentor’s tail, she even convinces him to take  off with her to  a destination where  her  enemies  can’t find her.

Of course freedom is a myth, specially when you have your dark past chasing  you. It is astounding how cretinous some men  get around distressed women who  just have to wring their hands and bite their lips  for us  to be putty in their  pretty  palms.

I am not to sure  if Marayka actually does  any  of those two things, wring her hands or bite her lips. But she  does seem fairly  determined to make her way around  her hostile world using her womanly  wile while  it works.

While the film struck me as  being  woefully  inert at  its  core  and  devoid of  beating heart, I  found the  film’s breathtaking  landscape to be  well employed by  director Nicholas  Woods.Yup, he  does make  effective use of the panoramic  landscape. But  the  film is  tragically lifeless and anaemic. It’s  as though no  real blood flows  through its  veins.

By  the  time the languid saga limps to its  finale  I  couldn’t care less what happens to Marayaka  or  Alex who made his mother  move to  a motel place  so that she wouldn’t be attacked at  home by  the villains. For a  film about    a dangerous liaison I found the proceedings deeply  dull. As  if  the  writers wanted  the characters  and the  to  suffer the in same catatonic  climate .