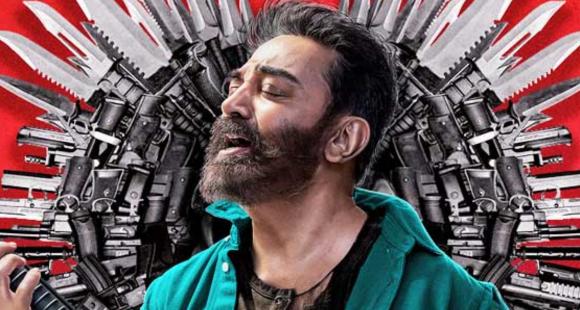 Vikram  starts with one  of the  protagonists staging his own death. This could have been  a case of shooting itself the foot. But it isn’t. The  increasingly audacious  plot penetrates the world of crime and drugs with no  (s)care  in  the world. More than anything else , Vikram is  a fearless piece  of  cinema. The colours of  revenge  and  bloodshed  peek at  us from every frame , often indicating a universe  gone awfully awry  in its quest for  self-fulfilment.

Kamal Haasan plays the title role. He  is  initially shown to be  a boozard and  a womanizer. But that’s an illusion  created to  knock the socks  off our  judgement-value  and to plunge us into a province of  impenetrable odds  in a world  gone  completely  askew.Kamal Haasan  has a couple of sequences where he chews up the screen with  a ‘meat’-cute relish.But  Fahadh Faasil dominates the  show without  a moment of flashy acting .He looks like a  man on a  mission committed  to getting it right. But  the other performing maestro Vijay Sethupathi plays the cartoonish villain with a surprising lack of enthusiasm.He is  shown to bite into a blue tablet to reinvigorate  himself. But his character  remains  listless.With his  gold teeth and  twisted walk, Sethupathi’s performance  oscillates between the giggly and the grotesque.

So, is Vikram worth  watching for the three super-performers?  Partly, yes. Fahadh Faasil nails his character and some of  the supporting actors like Chamban Vivod Jose(playing a brazenly  corrupt  senior cop), Narain as  a part  of  the  extra-constitutional  law enforcement agency and Vasanthi as a special agent working as a househelp, fortify  the frenetic show.

Anyone who tells you they follow  the  entire  course of the  zigzagging plot would be lying.However  making concessions for  the  Kamal Haasan brand  of  intellectualized espionage , Vikram  grips you even when  the narrative gets  too dense to follow. It is shot in striking colours  that indicate  urgency and  intrigue.