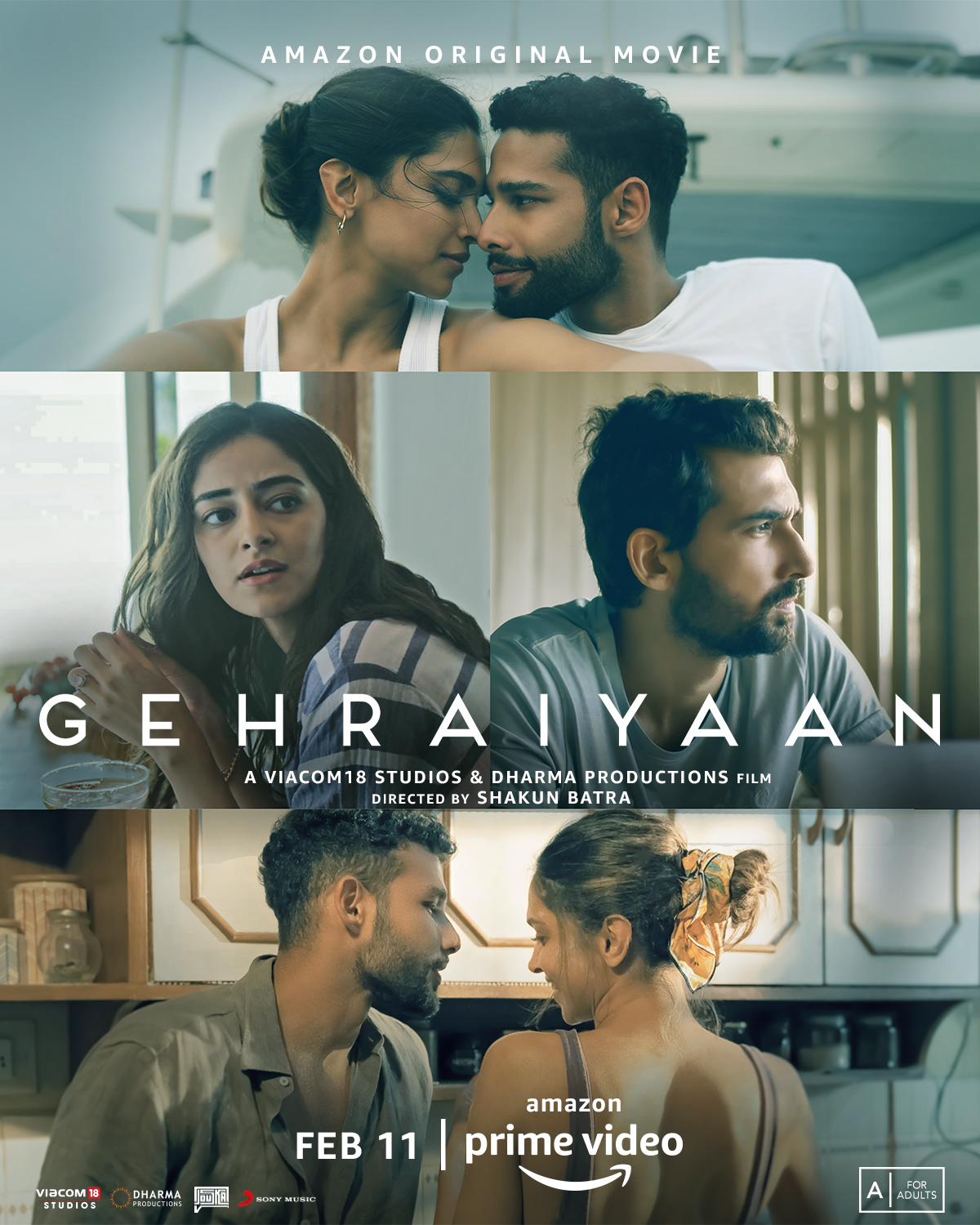 “Get out, I don’t want too see your  fucking face,” Rajat Sharma  playing a cross between a worried friend and a closet fiend barks at  Deepika Padukone.

This  just about sums up the  mood of the  irate characters: either they  use the F word all the time(“Yeh  fuck fuck kya laga rakha hai? An elderly character wonders)  or  they are  just doing it.

I never thought I’d get to hear Deepika Padukone  being ticked off so unceremoniously in any film.  But there you have  to. Beautiful actresses yearn to turn the tables  on themselves In  Chhapaak  Deepika played a victim of an acid  attack with a scarred  face.Here  in a film ironically titled Gehraiyaan she is cast as a  fractured broken  woman struggling with suicidal thoughts and emotional-physical indiscretions that  would  shame the  self-delusional antics  of  Meryl Streep  in Florence Foster Jenkins.

Padukone tries hard to give a semblance  of structure to  her character Alisha,  hellbent  on ruining everything she touches.When the  film opens she is not too successful with her work,  in  a relationship that’s seen better days, Alisha embarks on a hellishly  ruinous  relationship with her cousin’s  boyfriend Zain.

As played by  Siddhant(Gully Boy) Chaturvedi, Zain is  neither particularly  charming nor   exceptionally  intelligent. Just why Alisha is attracted to him remains  a mystery. Could it  be the forbidden  fruit, the banana-mere-ghar-aana syndrome, infidelity  being a pretext to  whisk away  cousin Tia’s precious possession?

Tia as played  by  the supremely untalented Ananya Pandey is a clueless heiress. She reminded me of Tina Munim in  Basu Chatterjee’s Baaton Baaton Mein where she tells her uncle (played  by David) that she has  a huge  problem.

“What is  it my child, you can’t make up you  mind about which dress to wear  for  the party tonight?” David  mocks. That’s Pandey’s Tia for  you. While her  cousin Alisha bangs away with her  fiancé Zain right under her nose  in  a luxury yatch brought  with Tia’s money, Tia looks like she is meditating over which shade  of lipstick to wear  for  the evening’s  party.

All the   four main characters  of Gehraiyaan are  spectacularly shallow people. Seen  ironically the film’s title seems  appropriate, specially  in the light  of  the  fact that one of the characters eventually ends up being swallowed  up in the depths of the ocean  while all the rest of the protagonists are perpetually at sea.

The  performances  range  from admirable(Deepika Padukone) to clueless(Ananya Pandya) to tolerable(Dhairya Karwa)  to  insufferable(Siddhath Chaturvedi). There is  also Naseeruddin Shah as  Alisha’s  tortured tormented Dad. He gets to be part of one of the  stupidest most awkwardly  written sequences  where he sees Zain hurry out of  Alisha’s apartment, drop the  keys pick it up  and run  off, only so that Naseer, the method actor, can tell his screen daughter, “Beta what’s going on ? I saw him  leave your apartment and he had  your keys.”

Incidentally, Zain’s  surname is Siddiqui, a  fact that’s  kept out of  the  proceedings.And  that’s about the  most discreet that this  film can get about the indiscretions of   illicit lovers.

What kept  me going through nearly  2 ½  hours was the flawed fractured protagonist’s character. It’s good to see female  heroes  in Hindi cinema  who are not perfect in face, fortune or feelings, and who actually have  a  sexual  appetite. For those who count these things, the number of smooches that Deepika shares with her co-stars  could make for an interesting  diversion.

Then  there are  the  unintentionally  funny dialogues, “Please don’t make this harder than  it already is,” pleads Alisha with Zain.

We know.When it comes to  illicit sex it can  get really hard.