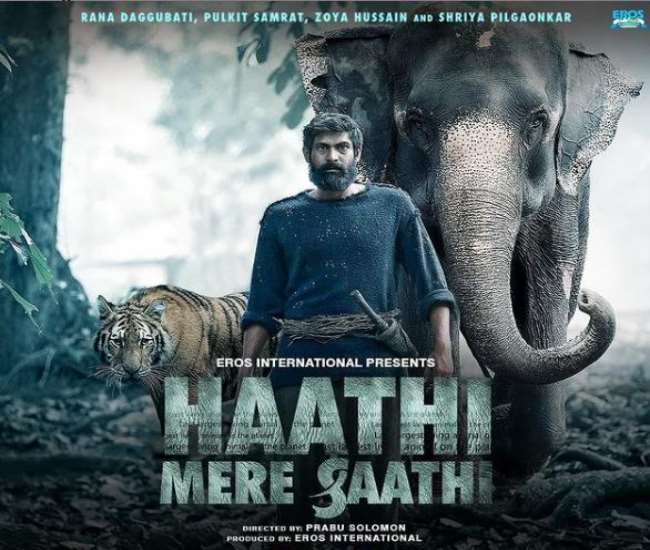 The  trailer  of  Haathi Mere Saathi would have pacified Rajesh Khanna. This Haathi Mere Saathi has  nothing to do with Mr Khanna’s  1971  blockbuster  of   the same  title. This one  has  lots of elephants in it  but fails to address the elephant  in the room: why  has this film been made? Going by the trailer  it looks  like  an awful mistake . So  why  compound the  mistake  by releasing  what is clearly a dud  sanctioned  in a moment of insanity? If I was  the producer I would  quickly  throw the footage  into the sea and pretend  it never happened.

Haathi Mere Saathi  has  Rana Daggubatti running around with a wild  look in his eyes as if he’s just seen the Chinese  releasing the Covid virus. He plays some kind  of an  animal conservationist  battling to save elephants   from evil  capitalists.Anand Mahadevan is  the greedy entrepreneur  who  builds  a big wall  blocking the elephants from the jungle.Someone  should block the elephants  from  queuing up too see this film. They would feel insult is being added  to injury.

And poor  Sheeba Chadha! That extraordinary actress gets to  say just one word. “Silence!” .

But no one is  listening.There is a whole  lot  of  noise and screechy  sermons on how  human plunderers are  destroying the elephants’  natural  habitat.

But  the  tone is way too shrill to convey the message  . The CGs are extremely poor  in the trailer. We can only hope  and  pray that everything gets better in the actual film. So far,what we see  is disastrous . Daggubatti monopolizes  the  footage . The voice that’s dubbed for him in Hindi doesn’t suit him. Ditto Zoya Hassan  running around  the jungle trying to save the elephants  and  trying to save  poor  Pulkit Samrat who looks  lost in the jungle.Anyone would,  after running  from dawn to tusk.

But who will save  the  audience   from this hysterical tripe  about the plundering tribe? If there  was  a chance  of a handful  of audience actually braving the Covid to see this shrieking  film, the trailer  kills it. This film  should be referred  to the SPCA. The Society  for  Prevention  of  Cruelty  to the Audience.