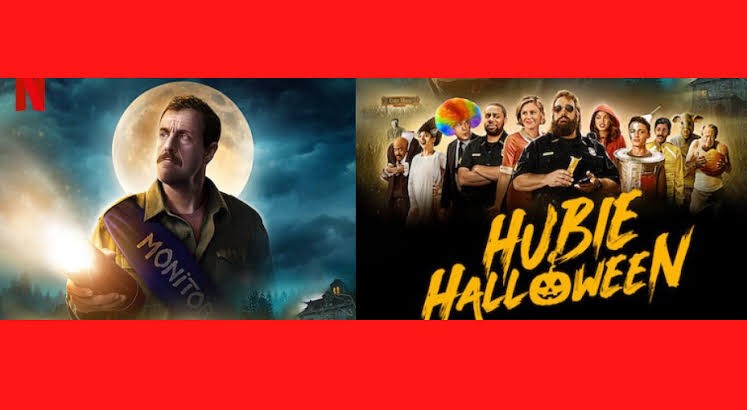 For years Adam Sandler  played the goofy  pranksters who doesn’t take  life seriously. Then  just when he proved his brilliance in Uncut  Gems, which is to Sandler  what Raging Bull is to Robert de  Niro, comes this abomination  a Halloween special which had me wanting to throw up my hands in despair, and then just throw up.

It’s  a homage to  the most moronic tenets  of  screenwriting more absurd  illogical and unbearable than anything I’ve seen  for Halloween. And  the  excuse that  it’s holiday  blueschaser(so just chill)  just doesn’t work.Lighthearted entertainment and  brainless  non-entertainment separate  subjects  , never destined   to  come together .

Sandler who takes ‘credit’(ha!) as  co-writer  plays a  kind   selfimportant  doggooder whom  everyone heckles,taunts  and  bullies.  But  Hubie has a good heart which comes   ambling to  the surface during Halloween when  all kinds  of  strange  incidents  began to take  over   in the small backwater American town of Salem.

The    sense  of community  intimacy  is  discernible in  the lot. But little of anything else, including Sandler’s insistence  on delivering his dialogues as though he had  just gargled  on horse urine, makes sense. Most of all, the  very existence  of this film is  suspect. Why  the  utterly  vacuous  plot, if not to shame Sandler and  the  many other talented   cast members  including  Steve Buscemi who  thinks he  is 400  years old.

I came  out of the ordeal feeling pretty aged myself. There  is  a towering sense  of  despair    in the  audience that  grows as  the  characters  go from bully to bullied. The  movement of  the plot betrays  a  lack  of  conviction in the writers. The plot  drags  its feet  through the  homes  of  many  characters who  serve as  no more than a blur . There is  evil in the  air, and don’t we  know it! Spending  a  good accursed  100  minutes with a  film that’s more  holloween than halloween, is more  that we  can take.

The  plot is riddled  with  mean bullies who  treat the defenceless hero with taunting derision. Sandler, poor chap, only has his thermos flask to  protect him. It’s a magical   brew container, more powerful than anything else in this doddering show.