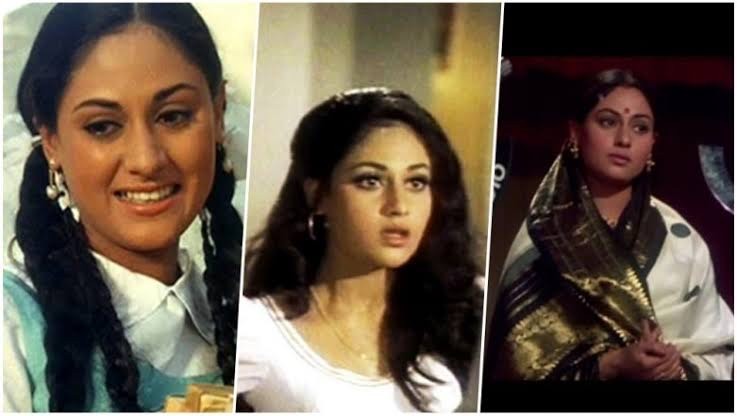 At one point in her career(circa  1973-75) Jaya Bhaduri was a  bigger star than Amitabh  Bachchan.Her  much-lauded  performances  in  the obvious films Abhimaan, Uphaar, KoraKagaz, etc need no  recommendation. But what  about the  Jaya Bhaduri  master-performances which you have  probably missed   while no one  was watching?

1.     Bawarchi(1971): Among all  the films that  she  did with her favourite HrishiKaku(Mukherjee)   Bawarchi  is the   least celebrated  ,probably because Jaya had a relatively briefer  role in this one than in Hrishikesh Mukherjee’s Abhimaan and Mili. But as  the quiet  underdog of a large  squabbling joint family Jaya spoke  more through her eyes  than  her other voluble  roles(Guddi , Uphaar) in 1970-71  allowed her to. Bawarchi  was  also  the only film that brought the two superstars  of the early 70s Rajesh  Khanna  and  Jaya Bhaduri together. But  only because they couldn’t say no to  Hrishida, and only  because they were not paired  opposite one another. It is common knowledge in the film industry that the mighty Khanna didn’t like  working with heroines who didn’t pander to his ego.

2.     Piya  Ka  Ghar (1972): In 1971-72 when  Jaya was the  toast of  the nation for her performances  in  Guddi,Uphaar,  Parichay and Koshish she  featured in two  films with Anil Dhawan.  Among the  two Annadata  was touching  in its portrayal  of  humamcompassion.Basu Chatterjee’s Piya Ka Ghar was  splendidly  plebeian. In one of her quietest  performances, Jaya  played the  newly married wife brought to  joint family in a  chawl   craving for  some privacy with her husband. Watch her attempts at trying to get her husband’s attention in a room full of  racucous  relatives.

Also Read:  Heropanti 2: What The Hack!

3.     Anamika(1973): In the year  of Abhimaan and Zanjeer, came Anamika where  Jayastarred as a woman  apparently  suffering from  amnesia whom Sanjeev Kumar  picks  up on the road and  brings home, with moving  and hilarious  consequences Remembered  to this day for  one of Lata Mangeshkar most popular songs Baahon mein chale  aao, there  was a lot more going for the film, mainly the  brilliant chemistry between the lead pair. See them together  in this film and you know why  Jaya’s favourite co-star was her ‘Haribhai’ the much-missed Sanjeev Kumar.

4.     Desh(2002): One of  Jaya’s  personal favourite  as she  got to play her  son’s mother on screen. This elegiac Bangla  film directed  by Raja Sen(not the  celebrated  film critic) is about  a woman having to choose  between joining her son in  the US and helping a young woman fight a  corrupt  politician  in  Kolkata. Jaya’s inner strengths  as a human being were  never more  visible on screen. Abhishek made an appearance  at  the  end  of the   film  as her  son.

5.     Hazaar Chaurasi Ki Maa(1998): Govind Nihalani persuaded  Jaya Bachchan out  of  retirement to play a powerful matriarch  with a wimpy husband(Anupam Kher) whose  only son (played brilliantly  Joy Sengupta) dies suddenly. The devastated  mother revisits her  son’s life after  his death to discover some dark  uncomfortable  truths  about him. This is a  nerve-wracking, life-changing   film that  is meant  to  change how we look at  our lives  vis-à-vis those  closest to  us. Jaya admits this was  the toughest most challenging role of her career, and the most rewarding. Try to find  it  on one of  the  OTT platforms. It must be somewhere  out there.