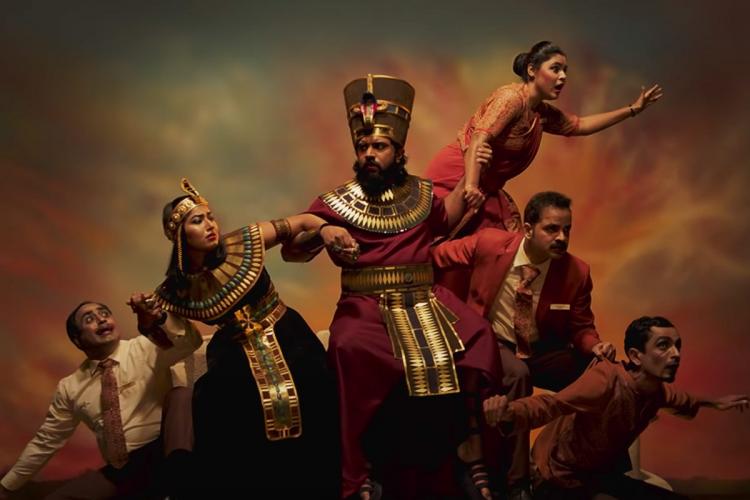 You have probably never seen a comedy like this. The absurdist humour  gets  more absurd with every  passing sequence until we  reach  a state of  furious  exhaustion and exasperation  not knowing whether to laugh at the  oddball goofiness  of  the  situation that  the characters find themselves in, or to simply dismiss the endeavour as  a botched  burlesque, a comedy of errors  that Shakespeare  could have  never imagined.

For all its outrageous  leaps of  farce, Kanakam Kaamini Kalaham doesn’t  quite  fall on its face. Though  the  gags  get  more wearisome by the  minute,  the mirth is  not  all lost in the  parodic  pandomanium  during the pandemic set in  a holiday resort in Munnar called Hill Top where  a junior artiste Pavithran(Nivin Pauly)and  Haripriya(Grace Anthony) have come to repair their  marriage.

The  startup is  amusing. Pavithran is  obviously a  bit of a scumbag and a trickster. He presents his  wife with (cheap) gold earrings pretending they are expensive, then  pretends  that  they got stolen by the hotel staff.

Most of  the  film happens in the  hotel lobby where the  interrogation takes place.Sundry characters  saunter  in and  improvise their  hearts  out in what must have been a banquet  of spontaneity  for the characters.  To  a point,  Vinay Forrt as  the hotel manager, Jaffer Iddukki as  the  resident drunkard  and  Rajesh Manaf  as a Muslim waiter who pulls  out the minority-discrimination card whenever  it suits  him. Keep the  laughter  from  annihilation . But after  the  initial  jokes about an anonymous junior artiste  and his  tv serial  wife  who  is recognized by  hotel guests,  induce a chuckle in the audience.

Also Read:  Scoop: Double Role For Shah Rukh Khan In His Next

By the  time  the drunken guest  begins to puke  all  over the carpet, the  narrative loses  its plot going from one stale distasteful  joke to another.  Since the hotel manager’s name is  Joby, it is loudly  compared with dhobi. Someone  looks at our  junior-artiste  hero Pavithran and exclaims, ‘You look  like Nivin Pauly.’

What starts off as  a no-holds-barred irreverent contumacious  comedy soon settles down to   “safe” jokes  like, “My name is Manaf Khan, and I am not a terrorist”.

The  earrings are  eventually irrelevant. What  counts is  the  uniqueness  of  the humour  in KKK and  the sparkling comic timing of  Nivin Pauly,  Grace  Anthony, Vinay Forrt  and Rajesh Madhavan. The sparring bout between Grace Anthony and the  hotel receptionist(played with a glowering  joy by Vincy Aloshious)is  the most interesting  sub-plot of this anorexic storyline.
How I wish  the  writer-director had worked more on  fleshing out the characters,rather than flushing them down the toilet  of tawdriness,  projecting their  anxieties not as jokes but  something  a little more dignified.