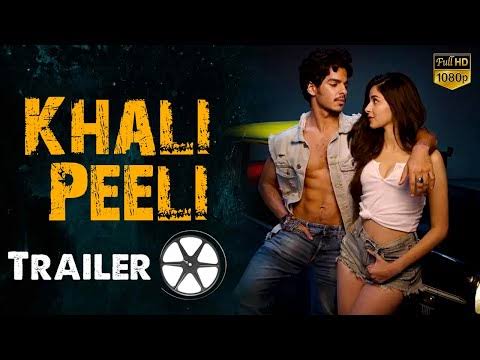 The trailer of the  Ishaan Khattar-Ananya Pandey starrer Khaali Peeli is  worse than  one ever imagined .The fact that Ms Pandey comes across  as  so fake and disaffected  should surprise  none.She is  after all, hardly known for her acting chops.

Come to  think  of it, what is  Ananya Pandey known  for?

It’s Ishaan Khatter whose  loud hammy  antics in the trailer are  completely  offputting.Really, what was he thinking? After that commendable performance in Mira Nair’s  A Suitable  Boy, is this  Ishaan’s idea of letting his hair down? It is not  only his  hair Ishaan is letting down.What  about audiences’ expectations? What  about his own expectations?

Both Khatter and Pandey sport thick fake Bambaiyya accents which are as  convincing as Priyanka Chopra’s American accent, and just as incriminating.  The two actors are on the run and there is a  yellow bag dangling  between them which they  keep  squabbling about. There are guns and ganaas, car chases and grimacing  faces none  of which  seems  particularly  amusing even during  these hard times when we are ready to smile at  the  slightest  provocation.

Khaali Peeli has lots of  bright inviting colours splashed  across the frames. These are  likely to get lost  on   the  OTT screens. But looking at the  brighter side,  this is  the  only platform where a film as shabby-looking as this can hope to get  noticed.

Last year on October  2 we had Hrithik Roshan and Tiger Shroff  locking horns in War. This year we  have Ishaan Khatter and Ananya Pandey blowing the horn in a taxi which,  like the  Hindi film industry , has seen  better days.