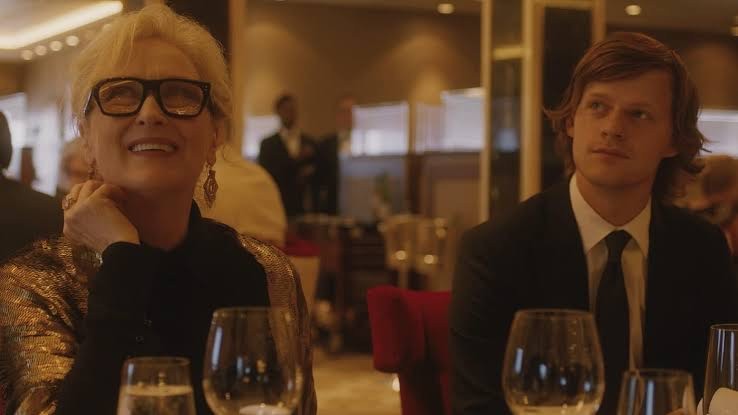 Let Them All Talk(Amazon Prime)

Two Meryl Streep releases within a  month! What have we done  to  deserve this?  The Prom and  now  Let Them All Talk are as different from each other as , say Sophie’s Choice and The Devil Wears Prada.

No two films of  Meryl go down the same Streep. And this one is as  distanced from her other distinguished  works as land from ocean. I say this in the hope of  sounding clever. For, Let Them  All Talk is set  in a luxury cruisier  where author Alice Hughes(Streep)  is stuck with her old college friends. I say ‘stuck’ because they were close at one  time—or so we are told—though there seems little reason  for Alice to have invited the acid-tongued  reprehensibly selfserving Roberta(Candice Bergen) and  the sweeter-than-autumn-right-to-the-bottom Susan(Diane Wiest) .

Also along for the  joyride(?) is  Alice’s  favourite  nephew Tyler and it’s  one of this  faintly  likeable  film’s pleasures to watch the  seasoned Streep and the  young talent Lucas Hedges  fudge their way  through breakfast  conversations in  what looks like  a scriptless  voyage into  mid-ocean.

Stranded  in  the  azure waters,  the  actors do what they know best. Act.I  am  not sure why all these talented actors agreed  to be a part  of a film that is  so haphazard  in design and execution. The understated  but  undeniable conflict between  people who  were once close but are now torn apart irredeemably , reminded me of Woody Allen’s  cinema,  except that here we are not  supposed to laugh when Roberta comes into Alice’s room and asks her to pay up money for using her(Roberta’s) life in her last  book. This, after being invited by Alice  for a free joyride , is  a  laugh.

But we really can’t do that.Not when the above sequence ends  in abject tragedy. Let Them  All Talk is  still watchable for  the  performances,  not just Streep who  is…well Streep(and that’s all we need to know) but also Diane West and Candice Bergen, the latter no longer the sexy lissome lass from  The Wind & The Lion but nonetheless still a ball of fire who can cut the wind with her leonine gaze. Hedges as  the  nephew  struggles  to give coherence to a part that requires the  young actor to be  in awe of Meryl  Streep and the character she’s playing.

Oh yes, there also a literary agent, played by  GemmaChan, on board . What is she   doing there?What are  they all  doing  in this film?Apparently Soderberg  shot this film on the ship  from a wheelchair. This could be the  distinguished cast’s of saying thank you.

Vikas Khanna’s Biggest Project To Be Inaugurated On 10 January