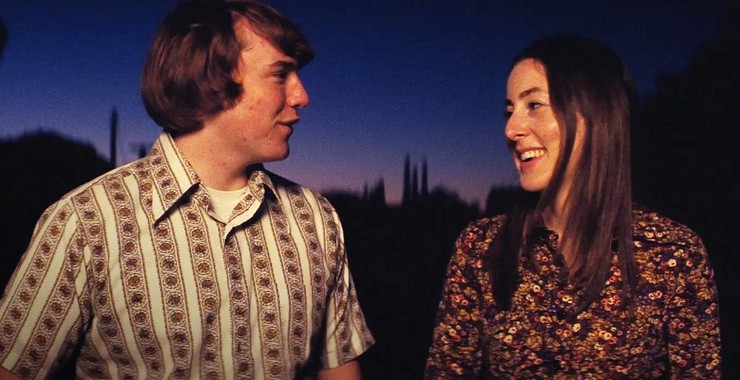 American  auteur  Paul Thomas Anderson has made masterpieces  like  There  Will Be Blood and Boogie Nights.

Here  it’s all about atmosphere, baby. So lay it on thick!It’s San Fernando Valley in 1976 and Anderson is all revved  up about the  hyper-activity  everywhere. He  whips up  a  storm  in a teacup,and wants to be blown away.The  crises are  hardly worth a second glance, some social, others political , none in the league  of any great revelation let  alone any  sign of a revolution.

I have lost count of  the number  of  retro-American  films where the  girl (preferably chewing gum, though not this time) is bored  of all the attention the  boy insists  on showering on her. During those days  it was  not called stalking; it was  courtship. Hence Gary(debutant Cooper Hoffman, son of  the late and  borderline-great Philip  Seymour Hoffman who did  great work with Anderson  in Magnolia, Punch-Drunk Love and The Master) follows  the pretty Alana(Alana Haim)  around like  Mary’s little lamb. He  stares at her open-mouthed even when she warns him not  to act creepy(I am not too sure staring at women was considered ‘creepy’ in the 1970s).

Soon she succumbs to  Gary’s dubious charms although she is  10 years his senior. They are thrown into the  middle of what looks like  a contrived  conundrum,  selling waterbeds to  sleepless Americans.One after other a crisis shows up in the  script  forcing the  narrative  into tight corners where  Gary and Alana squeeze in as best as they can, hair  duly tied into a puzzle.

Regrettably,  writer-director  Anderson has  little  patience with  letting the characters  breathe. The two young  protagonists are shown sliding into the  tragic-comic zone with  nary a space for a  sigh.

A  full redundant episode features a real-life temperamental  producer Jon Peters played by  Bradley Cooper only because Cooper wants to  finger  a freaky part. So  Peters harasses and bullies  our two protagonists who  take revenge in unexpected ways and  then when petrol runs out(the fuel crisis  forms a political  undercurrent  in the  feverish  goings-on) they roll their truck down a sloping winding road in reverse gear.

Before  I  could settle down to savouring the eccentric humour , Alana is a volunteer in  a  young dynamic politician’s election campaign . The politician Joel Wachs(Benny Safdie) is a closeted  homosexual whose lover is a sad man.Alan  gives him TLC to the sad gay man and runs   iron out her  differences with Gary…and…and… that’s it!

At the end  I was left wondering what I had  just seen!  A  coming of age film with two newcomers  trying to dazzle  and succeeding to  just a fraction of  what they hoped for?The film is fashionably  unfocussed, littered with a   languorous  light that brightens up some of the less whimsical episodes. But most of this is just idol worship. Like  Boogie  Nights without the penises or  There Will Be Blood without the  oil.