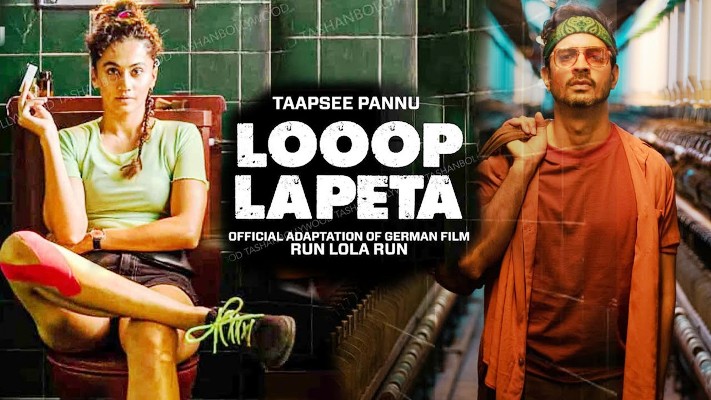 There  is  something  to be  said about  a film that doesn’t shy away from its chaotic scenario. In fact Looop Lapeta welcomes  it. There is  an arresting anarchy at  the heart of this audacious  endeavour to  combine the heist  genre with  the cinema of selfrealization.The fusion  almost works.

Not that there are any  breathing spaces for  philosophical  ruminations. The pacing is  breakneck.And the  characters that Savi(short for Savina) played by the  ever-adventurous  Taapsee Pannu ,  encounters in her heaving  journey  to save  her wastrel boyfriend Satyajit(Tahir Raj Bhasin) from being  annihilated by his  sinister  boss(Dibyendu Bhattacharya) ,will have  you gasping for breath. This is  not what Savi  or the audience signed  up for.

There is  a peculiar kind of energy at work here, a sort of  Savi-on-wheels-or-is-it-something-else kind of loco logic runs through this  runner’s  raga. As Savi(na) , Taapsee is full-on into the business  of  doing a mythological  Savitri on her Satyavan  by rescuing her from the  Yamaraj in his life.Why else do you think the   mislead pair  is named Savi and Satya?

Also around is an   inconsolable  cabbie named  Jacob(Sameer Kevin Roy)  who is  in love with  Julia(Shreya Dhanwanthary). It’s an endearing  subplot  pinned precociously into the  simmering plot by the two  young actors  who play Jacob and  Julia.

Gappu(Raghav Raj Kakker) and Appu(Manik Papneja ) join the hectic fun as siblings  planning to rob their own  jeweler-dad(Rajendra Chawla). Their rehearsals  before  the  Big Bang(which  whimpers  into an anticlimax) are  hilarious largely  for  the two actors  playing the daft  brothers.Papneja  specially  is a  comic  talent to watch out for.

Another sub-plot—yes, one more—is  about  Savi coming to terms with her  Dad(K C Shankar)’s  affair with a  young man . This, I confess,I’ve never seen in any Indian film. Liberal times? Or just a  wacked-out one-off  zany  rom-com romp  into a tongue-in-cheek immortality tale?

It’s Taapsee Pannu who again holds the  anarchic  plot together.She is in-charge  and she knows it, giving her  best shot to  her agile eccentric part  bringing to the table  a kind of  self-aware  fun that actors seldom dare to venture into our films lest they be dubbed  careless  or incompetent.

It is a miracle that  the  director has managed to assemble such an eclectic  ensemble cast and  yet  succeeded  in giving the  narrative  a complete  look. For all its diversions into sub-plots Looop Lapeta  never  loses it way.  It remains  till the end  a droll dive  into a world of crime and  surrealism with the  grammar  of  whimsicality  governing  every twist in the plot.

Fun, if you are not looking for  two hours  of cerebral salvation.