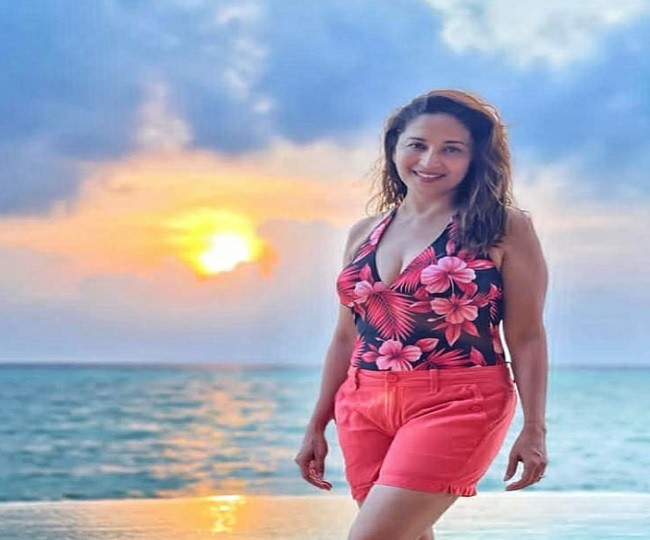 1.     Pukar(2000): By far Madhuri Dixit’s  finest performance  to date.A film about obsessive unrequited love ,Madhuri’s  act(s)  of desperation  to make Anil Kapoor  love her even as he preferred  Namrata Shirodkar , haunted  me for months. I still remember her  pleading eyes  begging Kapoor  for  a chance to prove  herself. Goosebumps! As  Anjali, the  casualty of the worst  scourge mankind has (n)ever  invented  , Dixit just nailed it. The pleading , cajoling, threatening…eerie! And as far as Dixitji’s  legendary dancing skills  goes can anything she did beat her Que sera sera with Prabhudheva? Ironically the National award was  given to Anil Kapoor rather than Madhuri. It’s like honouring Raj Kiran  instead of Shabana Azmi in Arth.

2.     Prem Pratiggya(1989): As  the neighbourhood  dabbewali Laxmi(a sort  of  streetwise version  of Nimrat Kaur in Lunchbox) who tames  the  good-hearted goonda Mithun Chakraborty  , Madhuri  gave her  first indication of histrionic greatness in this quaint  love story  . She later told me that  every gesture  in the performance was decided  by the great  Telugu director Bapu. But even following a director’s instruction  requires  a surplus  of  common sense and intellect.

3.     Khel(1992):  While most  filmmakers  prefer to cast her in dramatic  roles, Rakesh  Roshan  gave  Madhuri  that rare  opportunity  to a female actor to explore her  funnybones. The lady’s comic timing  in her scenes with her  favourite co-star Anil Kapoor  and Anupam Kher were  priceless.  Madhuri had  a  lot of fun  playing the  role, and  it showed.

Also Read:  5 Reasons Why Jugjugg Jeeyo Is Likely To Be A Big Hit

4.     Mrityudand(1997): As a rebellious Bahu in a Bihar’s feudal  household Madhuri’s character  fought  all odds(including  the  director Prakash Jha who insisted  on recreating  Bihar in the  outskirts  of Mumbai).And emerged  triumphant. This is the  first and last time that Madhuri  was  pitched against the formidable Shabana Azmi  .And  Madhuri held her  ground.Among her slew of  dramatic  triumphs  in Beta, Devdas, the appalling Sajan and  the  misfired Prem Granth,  Mrityudand stands tall and  is a glorious testimony to how  far she could stretch her wings and soar in the sky when  given  a chance.

5.     Lajja(2001):   Not too many  of Madhuri’s fans  have seen her class act in this underrated Rajkumar Santoshi vintage drama about  four gorgeous women (Manisha  Koirala, Rekha, Mahima Choudhary and Madhuri Dixit) and  their journey of self-discovery. Koirala and Rekha shone  . But Dixit outclassed  herself. She dazzled as a  theatre actress who was about to become an unwed mother.Whether taking on  the moral police or  taking a pee at the  roadside,  Dixit was  an unstoppable meteor. If you haven’t seen the great  Madhuri Dixit Nene   in Lajja or Pukar, then  ain’t seen  nothing yet.You don’t really know what this superlative actress is capable of.

Related Topics:featuredMadhuri Dixit
Up Next