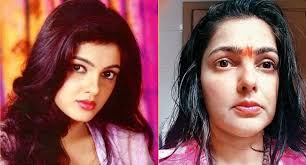 The two most famous  Mamtas of India share  one trait in common. They are certifiable firebrands, no man(or woman)can mess around with.

Mamta  Kulkarni was  never a great actress . She  didn’t aspire  to be one.But she was popular,or teekha, as one of her co-stars  describes her. He  also describes her  as  fun-loving. “Ekdum mast ladki tthi. Hassle-free.She  may have had a sexy image and all that. But she never compromised   in her career. All those hit films she  got  on merit alone.”

Strangely none of her co-stars or producers  want  to talk about Mamta Kulkarni on record.

“Why do  you want to talk  about Mamta Kulkarni? ” a well-known producer asked me.

Because  she had  quite a  successful  innings  in the 1990s? Because she featured in hit films with  Akshay Kumar, Salman  Khan , Govinda. Suniel Shetty, etc? Filmmakers  like Mehul Kumar , Sajid Nadiadwala and  Dev Anand  cast her  repeatedly.Because Saif Ali Khan was launched  opposite Mamta in Aashiq Awara? Because she  was liked by the  public for her spunk? Because she  had  a  bigger  fan following on the big screen  in the 1990s than  some of the social-media  stars today?  Also, because she  just disappeared  at one point , got married and  resurfaced as a prime accused in drug trafficking?

Mamta Kulkarni’s real-life story  would make a  far more interesting film than  any of  the hits that she featured in  during the  1990s. She did write  about her experiences in an autobiography where  she spoke  about her spiritual  experiences.I haven’t read  it. I don’t know  of anyone who has. She claimed she  was  never married to Vicky Goswami  her  husband and  her accomplice  in the alleged crimes.

In a  videotaped message  in  2016  Mamta  said, “I am a yogini . I am engaged in spirituality and it effects by activities since the past 20 years. I am innocent of the accusations against me… I have never engaged in any act contrary to the principles of Indian statutes and am a victim of high-handedness, crude, unprofessional and unethical conspiracy by the officers of the US’s Drug Enforcement Administration and the Thane police.”

Bollywood history  would  recall Mamta  as  one of the first actresses  to call out a major filmmaker for sexual harassment. The allegations which she  shouted from rooftops ruined her career. Nobody would touch her  with a  bargepole   after she was branded a “trouble maker”. This is what  happens to  actresses who shout out against sexual  harassment . They are banished from Bollywood.  Does anyone  remember Sabeeha, daughter  of  yesteryears’ actress Amita, who accused a fading superstar  of  unbecoming behavior?

Luckily for Mamta  she  is  remembered even today with much fondness by audiences from the 1990s. Most  of all she is  remembered  for her notorious Stardust cover where she  went boldly topless, and was even jailed  for obscenity.  Come to think of it, Mamta Kulkarni was just right for  the era  of the social media. She  came  a little prematurely.

Nobody knows where Mamta Kulkrani is  nowadays. I hope she’s  at peace  with her notorious  past.