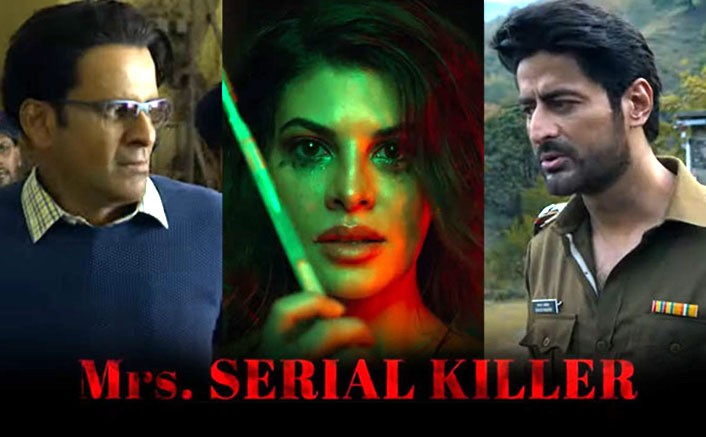 Among the many worsts  that this Netflix  atrocity  has to offer, there is  the worst dialogue I’ve heard  in recent times spoken  by the   very brave  actor Mohit Raina .

“I was surprised when  my sister  visited a gynaecologist  since she was  kunwari,” deadpans Raina.

Now , kunwari can be taken to mean  either  a virgin or unmarried.  Both ways, this sucks bigtime.

Ditto the film. The  insufferable pretentious  puerile   garbage  from Shirish  Kunder, the self-styled genius who thinks the  sun  rises and sets according to  hia (self-declared) wisdom Mrs Serial Killer  is  the  kind  of self consciously  lurid thriller that must have sounded like  Bollywood’s own version  of  the grisly  Korean  masterpiece  I Saw  The Devil  on paper. I can see Manoj , Jacqueline and Mohit dancing around the  dining table  after the narration while Farah Khan cooked  up her own  thing in the kitchen.

Devil be damned, I  saw Kunder’s film. And my life will never be the same again. In these  desperate times for movie addicts  like me,  Kunder has provided  just the antidote  for  my addiction.Mrs Serial Killer is  not just an awful film, it is so  proud of its  awfulness that it may leave  viewers  emotionally  battered and  wounded  for a while.

Jacqueline Fernandez braving her way  through an absurd role and  wading through a Hindi accent that made me wonder  if her character is  supposed to be a foreigner,plays  Manoj Bajpai’s  distraught wife. Her husband is in the cooler for  bumping off  unmarried pregnant  women. In a town that resembles a small  hill station I wondered how many of those(unmarried, pregnant) women would  a serial killer find? Perhaps he could have moved  to  Brazil and spared us  this film.

Fernandez  hits on  a bizarre plan to save her  husband’s  ass(along with the rest of him). She kidnaps  a woman(pregnant and unmarried) and decides to kill her so the law(always an ass) would think her  husband  innocent.  Genius  at work.

The plan, in keeping with  everything else  in this  corny concoction of  blood and buffoonery, is  horribly  botched. By the time the  film chugs to its  atrociously  exaggerated  climax in the basement  of  a hospital, we are as distraught as Ms Fernandez who looks like she has  just seen a bat in her  house during the lockdown. Bajpai  smirks  and hams  through a role that is  as thankless as it is witless.

I  did see Mohit Raina  trying to take his role seriously.He failed, of course.No talent no matter how big can withstand  the  torrent of  asininity that  Shirish Kunder  unleashes on us.  A  word to Netflix. Do they really think we are so desperate  for new films that we would sit through this super-twisted  take on a twisted mind?During the  climax   Manoj compares the film to his namesake’s  The Sixth Sense.We hear  you, Manoj. We can’t stop laughing.