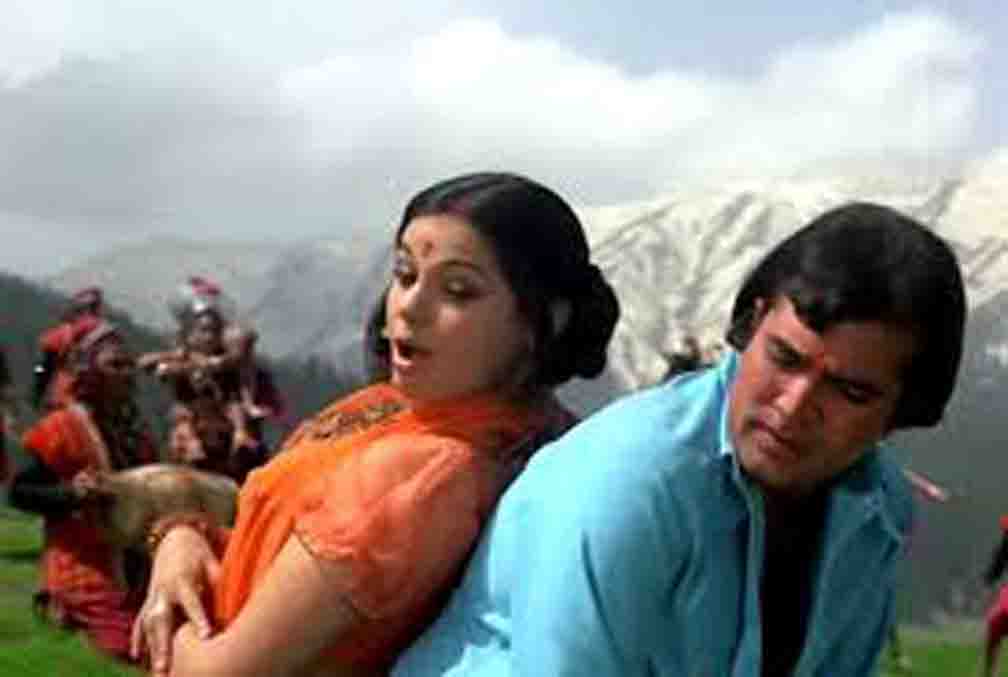 The iconic  actress Mumtaz, the heartthrob  of  millions danced  her way into  immortality with iconic numbers like Aaj kal tere mere pyar ke charche(Bramhachari), Bindiya chamkegi(Do Raaste) and Jai jai shiv shankar(Aap Ki Kasam).  Most of her most famous songs featured her in orange costumes.

When I spoke to her ,Mumtaz happily admitted to an orange  fixation. “Indeed orange was  my favourite colour. I am a very fair-complexioned girl of Persian  origin.Bright colours suited me. I especially loved orange. I’d sit with my  costume designer Bhanu Athaiya and make sure  the orange colour figured  in  the  songs and dances.”

The sizzling  Aaj kal tere mere pyar ke charche song-and-dance with Shammi Kapoor had Mumtaz making one major  adjustment. “I remember we  opted for an orange saree instead of  a gown . Normally I would dance  in western outfits for western-rhythmed song like this. But on this occasion the  Sippys(producers  of Bramhachari) insisted  on a saree. So Bhanu and I created a specially designed saree . The song had a lot of  jerks and movements. So we had  to  make sure the saree remained in  place.”

The  actress whose performances in Khilona,Tere Mere Sapne, Aap Ki Kasam, Jheel Ke Uss Paar  and Aaina  established her as one of the two topmost actresses  of the 1970s(the other being Hema Malini)  is now  in Mumbai.

Where’s Mumtaz’s headquarters these days? “Well, I’ve homes  in London, Nairobi and Mumbai. So  you tell me where my home is.”

Why did she  quit and leave at the peak of your career just because she got married?  “Maine industry hi nahin chhoda. Shaher aur mulk bhi chhod diya. I got married to the man I loved. I had two lovely daughters. Now I’ve four beautiful  grandchildren and they’re the loves of my life. I couldn’t have asked for more. No regrets  about leaving the industry.”

Mumtaz’s last  films were with Rajesh Khanna whom she admits  to being very fond of. “He was  my  favourite, no  doubt.And I  was his favourite.I can’t remember  how many films we did together. But we were constantly working together, right till I quit the  industry. Unke filmon mein  heroine ko zyada  kuch karna  ko nahin hota ttha(in his films the leading lady didn’t  have much to do). But  I like that  film which featured the song Duniya mien logon ko dokha kabhi ho jata hai ….Apna Desh.I had a well-etched role in that. Then there was Aap Ki Kasam  where both of us were  equally important. It had a very controversial subject where the wife leaves her  suspicious husband although she’s pregnant. I remember Kakajee and I had  heated  discussions with the  film’s producer-director J Om Prakashji  about whether the  film will work or  not. Eventually it was made and  it was a  big hit.”

Ask her to name her favourite film from her vast repertoire and she answers, “I can’t name my  favourite. But I can tell you which was the most difficult . It was Vijay Anand’s Tere Mere Sapne. I had to underplay my part all through the  film.  It  is very difficult to do this in our cinema where  actresses  had to do  a lot of loud  rona-dhona. Let me tell you, underplayed performances are far more difficult than the dramatic ones. So yes,  Khilona and  the  other well-known  performances of mine were all good. But Tere Mere Sapne was the toughest.”

Mumtaz’s  last film Aaina before she  married and  quit at  the peak of her  career, also starred Rajesh Khanna.  Mumtaz was  smashingly  powerful as a daughter of an impoverished Brahmin family who takes to prostitution to  make ends meet.

She recalls  the film fondly.  “Yes, that was the only film of ours where Kakajee  took a backseat. But that was  his guest appearance. That was a very powerful subject , directed by a very powerful and influential director of the South(K Balachander). The film flopped. People could not accept  the heroine’s  character.  Many years  later Yash Raj Films made the same  subject(Laga Chunri Mein Daag). Lekin wohbhi nahin chali(that didn’t succeeded either).

Although  Rajesh Khanna had  the reputation  of being  temperamental Mumtaz says she had  no problems working with  the Superstar. “The only time he’d get upset with me  was when I  signed films with  other  heroes. He  would  go and sulk in the corner.It was okay for him to work with  other heroines.There are separate  rules for  men and women. He always treated me  with the  utmost affection and care. He  affectionately called me  ‘Moti’. Because I was always on the plump side. That’s the way it was. And I didn’t mind.As far as being moody is concerned, I was the friendliest person  on  the set. I  sat and  chatted with all the technicians  between  shots. I  never behaved like  a  star. So why would anyone behave like a star with me?

Mumtaz is now in Mumbai catching up with old friends spending time  with her daughter Natasha and son-in-law actor Fardeen  Khan. “I am spending  time with  my loved ones here in Mumbai as long as  I’m here. Who know where tomorrow will take me? My world revolves around my beautiful  grandchildren”