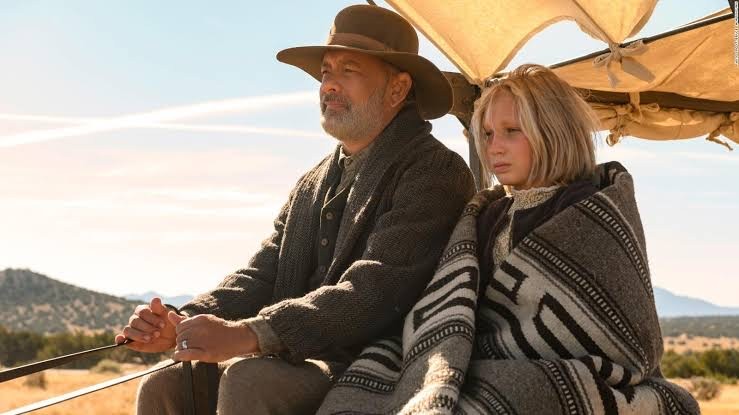 News  Of  The World

At the  risk of sounding odious, let me  state  that I am not a big Tom Hanks fan. He is a reasonably good actor who has done brilliant work in the past. Not in  recent times. Not in DaVinci Code. Not  in Angels & Demons. Certainly not  in Sully, Greyhound and  Captain Phillips.      Mr Hanks’s  new  films ranks as  his best in years.  He gets together with his Captain Phillipsdirector to  construct a parable of pain and compassion, a  tale of morality so basic so simple  so pure  and  so nurturing it feels like  a cool bracing dip in a  mountain  spring on parched day.

It is a  very simple story , really, about  a lonely widower in the year 1870  and  a little girl whose family is  butchered during the  savagery  of  the Civil War  and  has nowhere  to go.  Mr Hanks plays  Captain Jefferson , an autumnal man of principles who spends his remaining days  reading out newspapers  to an illiterate populace from one time  to another .

When the Captain  runs into the  little  girl  Johanna  under  traumatic circumstances, his first impulse  is to run like most of us do when we see an accident on  the road. But since  the Captain,being played by Tom Hanks, must have a conscience.He takes the girl in and eventually pledges to  transport her to her  surviving  family members.

Most  of  the  film is   styled like  a road movie on  horseback, replete  with heartstopping chase sequences and some of the most spectacular  shots of  the great rugged outdoors seen  during these times of  stifling lockdown.

But  the showstopper   is the sequence where Hanks and  the  girl join hands to  protect themselves from a bunch of outlaws. The shootout is  classic Western stuff. Staged  with the  persistent passion and  subtle precision   of  a craftily  choreographed  ballet  performance,that  shootout in the rocks is reason enough to watch  this film.

The  News  Of  The World gives us  a lot more to take home. It gives  us hope courage and  compassion, and it gives us Hanks in  one  of  his career’s finest  performances.  He had earlier played a kind generous-hearted man  in A Beautiful Day In The Nighbourhood where his character was too sugary to be digested.  Here he is  kind  but also human. He  is hurt and consequently knows  how  to hurt. But  he  never uses that  prerogative  for  self-preservation on the unsuspecting. The  young girl, played with an  appealing sullenness by German child  actress Helena Zengel, finds  a home at the end.In life  , as  in  the movies, in order to heal one needs to share someone’s pain.