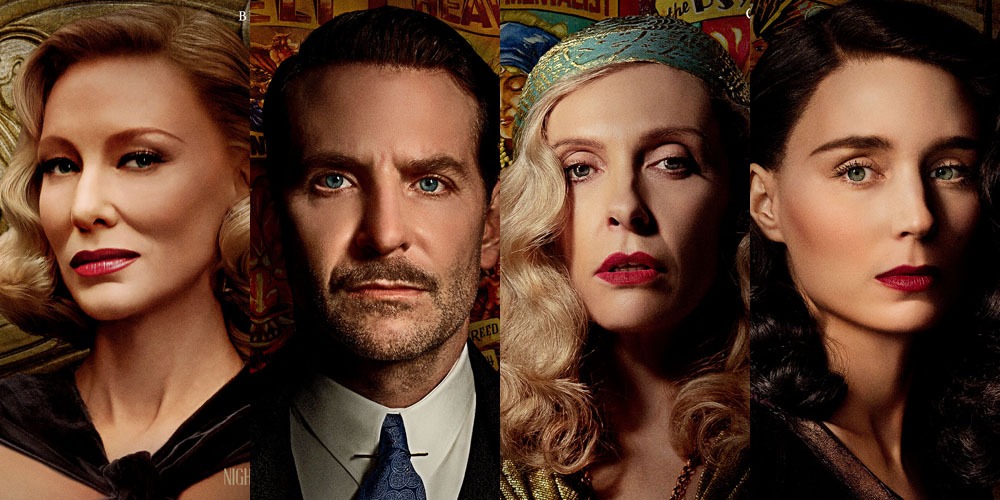 Director
Guillermo del Toro
Writers
Guillermo del Toro,Kim Morgan,William Lindsay Gresham
Cast
Bradley Cooper,Cate Blanchett,Rooney Mara
Plot
Nightmare Alley  Preview: An ambitious carnival man with a talent for manipulating people with a few well-chosen words hooks up with a female psychiatrist who is even more dangerous than he is.

Nightmare Alley Movie Review: “I was  born for it,”  sobs Bradley Cooper’s  Stan Carlisle at the end  of what is  an exhausting and yet exhilarating 160-minute  journey into the heart  of  darkness.He refers  to what  was known as the  ‘geek’ in the circuses  of yore  where a man was chained and starved and  put on display like an animal in  a cage.

The geek in Nightmare Alley reminded me  of  the  creature in Guillermo del Toro’s last  film  The  Shape  Of Things for which he won an Oscar  for  Best  Director. There is  no such  danger  in Nightmare Alley. The film’s  rocky destiny is marred by bouts of selfdoubt that every character goes through and  yet proceeds  to do the wrong things, from adultery to  forgery to felony.

This is  a  world of desperate gold-diggers,fortune-hunters with  no patience or appetite for  guilt. Cooper and Blanchett have a great deal of fun with  their parts, although  this is  not the  occasion for it.After scamming several  who trust him, Stan meets the  conniving seductress Lilith(Cate  Blanchett) who is sharp and saucy; in other words Stan with his dim-witticism  and dull comprehension of human nature in spite of being a fortune teller,is no match for Lilith.

More his  league is the straightforward  dis-enchantress(a new coinage to  describe  a woman who is  neither seductive  nor aspires to be) Zeena(Toni Collette) and  Mary(Rooney Mara). The  former  ,Stan fucks, the latter  he betrays until  Lilith fucks him over.

Nothing  is what it seems in  Nightmare Alley. The drama  unravels  like  a  mirror of illusions in the travelling  carnival where  most of  the  darkness erupts   into a blinding light  of  frightening blight  where  nothing is what  it seems and what we see is  not even a part of the truth  regarding the  lives of the characters who  live in  a permanent  state of impermanence and treachery.

Having said the above,  let me hasten to  clarify that  I didn’t like the  film as  much as  the Oscars committee, which in all its wisdom, has shortlisted this strange untameable   beast  of a  film for Best Picture.  Best  of luck with that.

Nightmare Alley leaves us with more questions than answers  on the nature of faith and belief.

The  1946 novel  by  William Lindsay Gresham on which the  film is based is dark  sinister twisted  and  unlikeable. The film follows the same  route, portraying its con-artiste hero  Stan as an illicit illusionist who lucks out when  he  manages to guess a grieving couple(the extraordinary  Mary Steenburgen and  Peter MacNeill)’s  source  of  sorrow and  proceeds to exploit their feelings.

Stan then  bites  into  more than he  can chew when he tries his  clairvoyant tricks with a mobster Ezra(Richard Jenkins). This episode ends on  a disastrous note, both for Stan and  for the audience , as  its underlying  message  of nemesis comes too late. All through the  film Bradley Cooper plays Stan as an artless , though not heartless deceiver, more sinner against  than sinned. Stan’s  self righteous  outlawry  comes to  a sticky end with no one  left any happier , us the  audience included,than the point at which  it all began.

Nonetheless  The Nightmare Alley is  a work of  unexpected  rewards provide  you stick it out. The way in which Stan  misuses his gyan on reading the future, turning  it  smoothly into into  a scam industry, shows that  a  moral degeneration is  the worst scourge since  the plague….give or take  the pandemic.