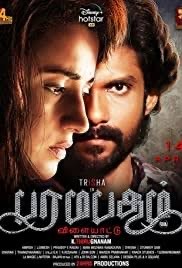 Halfway through what I   thought was  a  pulpy  political drama featuring one of Tamil  cinema’s  female heroes Trisha as a doughty  doctor who takes on a political mafia  that threatens to finish off a male version of  Jayalalithaa in a  hospital conspiracy  that  seems plucked from the headlines, the narrative suddenly swerved with tyre-halting screech.

And I  was  watching a  different film where a drunken disorderly taxi driver who  ought to be in jail, saves Trisha and her  vocally and  aurally  impaired daughter  from  a car full of goons with names  like Whisky , Maari and Dharma. I  made sure to remember the  goons’  names  since I thought their  contribution to the  film’s second-half, a Ramboesque survival saga in the jungle , owed a lot to the  ruffians who seem  ferocious  and ruthless but are actually  dumb as hell.

They  lock up Trisha’s Dr Gayathri in  a car dickey and drive her to sure death . But they leave  her cellphone with her. On it , she  repeatedly calls   the aforementioned drunken disorderly driver who until the end  I was not sure  which side he was on.Neither,  I suspect, do  the  story writers  of  this  Jeffrey Archer-meets-Sidney  Sheldon-meets-numerous-deadends  saga that has more twists  than the long and winding road  of  a motorway  dug into  a steep mountain.

The idea  here is to pre-empt audiences’ expectation constantly. And yes, we are  taken aback by  some of  the  plot manoueuvres . But not in  a good way, I am afraid. Just lining up every  character  as a suspect doesn’t make for a  riveting suspense thriller.Sure  ParamapadhamVilayattu is  breakneck paced but sadly it ends up doing just that: breaking  its own neck in the endeavour to  remain  at top speed  from first to last.

There are so many   absurdities and illogicalities  in the plot that I  stopped  counting after a while. The characters are meant to be  charming in  a roguish   sinister  kind of way. Like this  vaillainous  politician named Kalingan who  is  so  obvious  in his  evil designs  he  couldn’t possibly be taken seriously.There is the honest CM(a male version of  Jayalalitha) lying in a coma in a hospital. There is his London-returned son(Nandha Durairaj) whoe seems  to hero-worship Daddy to the point of seeming fake…bad acting or  bad  writing? Or perhaps  both?

Then there is a killer called David(Richard Rishi) who suffers  from  night blindness and keeps putting eyedrops in his eyes. Finally there is piss-drunk  stranger who can hardly move straight  but  can beat up multiple goons and save our heroine  and her daughter from death.

Because, you see, at the end  of the day even a female hero like Trisha needs  a man  to save her. She  gets it.  But  no one  saves  this film from looking like an overcooked hysterically  action-ridden frenetic  yarn which tries  so hard to please , even that item girl in the song  right after  intermission can’t compete  with the  film’s  eagerness to  get our attention.Subtlety be damned.