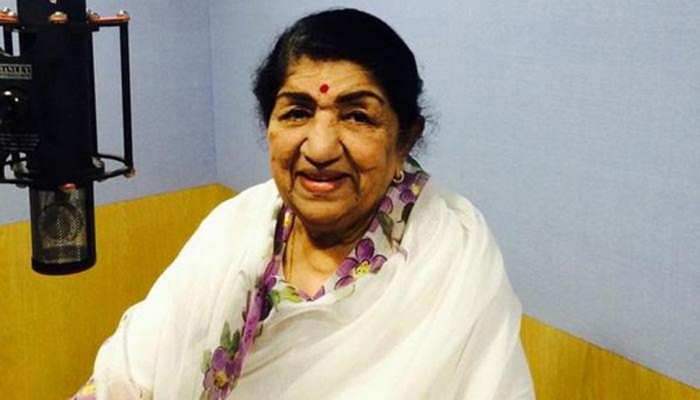 When in  1974 , Rajesh Roshan, the  talented  music composer   and son of the great  composer Rosham ,  turned a  full-fledged composer he gravitated towards the voice that defined Indian cinema.

“Lataji first sang for me in  Kunwara Baap  which was produced  and  directed by Mehmood. The  song was a made-to-order Lataji number Aa ri aaja nindiya tu le chal  kahin. There was no formal introduction. Mehmood Saab just mentioned to Lataji that I was like  his son, and  that was  it.”

Rajesh regards Julie as  a  turning point in his career. “The  title song was so  steeped in romance and love it  represented  the yearnings  of  two people in love. Lataji simply swept into the song as if she owned  it. It  became the anthem of  the  youth. Let me tell you, Kishoreda had  a very tough time  keeping up with her in that song.”

Thus began an enduring relationship with the Mangeshkars. Says  Rajesh, “I was  close not  only to Lataji but also her sister Ushaji who also sang some  big hits for me including the chartbuster Mungda. With Lataji, it  was  always heaven to record a song.”

Recalls  Rajesh Roshan, “I was very sure I wanted Lataji to sing for  the  title song where the heroine Laxmi in Julie gets seduced by the hero. I was new to the  industry. My father  (the great  composer Roshan) never pushed his own career, there was no question of pushing mine. I  knew Lataji from  my childhood. But there was never a formal introduction. I played the daflee  for Laxmikant-Pyarelal  in the song Jhooth  bole kauva kaate in  Raj Kapoor Saab’s film Bobby which she sang. Lataji just watched  me and smiled.”

There are two  big takeaways  that  Rajesh  obtained from his  recordings with Lataji.  “One was  the way she stressed certain words  at a crucial point of a song. She  always knew where to  punctuate  a song. She miraculously found space to provide her own  punctuation in the rhythm of song. There is  no other singer in the world  who can do this the way she can. I wish she had  taught  singers who came after her to find the  perfect place to punctuate a song.”

What is the other big lesson that  Lataji’s  voice taught Rajesh? “It is amazing how she moulded  her voice in every decade  . The way she sounded in the  the  1950s was  very different from her voice in the 1960s. And  in  the 70s and  80s she again moulded her voice into a different  sphere.How she  reinvented herself in each decade  to sound better and better is  a subject worthy  of  a thesis.”

Lataji  ranked  Rajesh Roshan very  high  as a music composer. She once told me, “Though Raju(Rajesh)’s  elder brother chose  not to  be  a music director  Rakesh has a great  music sense.  Just listen  to  the  songs  Rajesh Roshan composed  for his brother’s films  Kaho Na…Pyar Hai,  Koi Mil Gaya and Krissh.My  association with Rajesh goes  back to  the time he started  his career as a music composer. I sang  Raju’s  songs in his  first two films Kunwara Baap and Julie. My song Yeh raatein nayee purani from Julie  is  one  of my  favourites. Raju wanted to know if  I   had  that song on  my phone. I forwarded  it to him.”

Lataji  shared a  special bond  with the entire Roshan family.  “Roshan Saab was very close to me. I  was very fond of  him and his wife Ira , Hrithik’s grandmother.  Do you know I’ve sung a duet with  Iraji?  I think it was a for a Dilip Kumar-Nargis  starrer Anokha  Pyar  in  1948. The music director Anil  Biswas  was  looking for a female  voice to sing a duet with me. Since she  was a trained singer I suggested Iraji’s name. That’s how we sang Ae dil meri wafa mein koi assar  nahin.”

Hansal Mehta Directs Jigna Vora’s ‘Behind The Bars In Byculla: My Days in Prison’