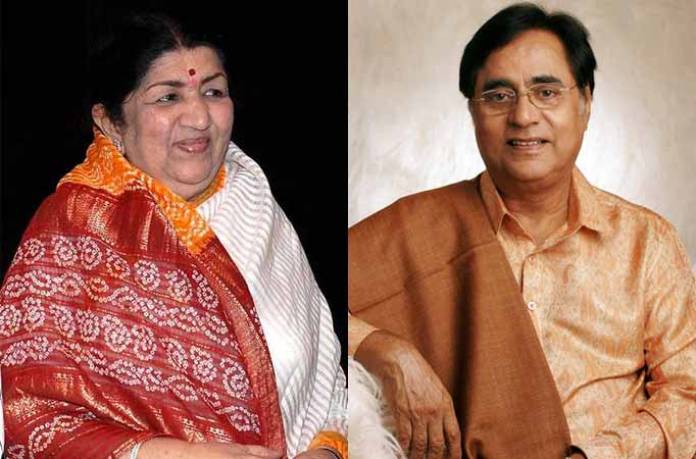 Like so many myths and misrepresentations  regarding the  Goddess Of All Melodious Things, which were  floating around  while she was  still here with us, the misinformation  regarding the milestone historic  album  titled Sajda  that she recorded with  Jagjit Singh needs to be  extinguished  with immediate effect.

I am talking  about the myth that  Jagjit Saab’s  better-half Chitra Singh  wouldn’t  “allow” him to  sing with  the great Lata Mangeshkar although he  was  pining  to do so.

This is complete  bunk. And  all those who have heard the captivating  content in Sajda  which to  this day endures as a consummate  masterpiece  of Ghazal  composition, and one of the finest albums in Lataji’s repertoire, is testimony to Chitra Singh’s  support in making the dream  project  come true.

For years and  years Jagjit Saab  harboured the dream  of  doing an album with his Latabai. The  cynics said it wasn’t happening because his wife opposed  the  idea . This was  far from the  truth.Chitra in fact knew Lataji  from long before  Jagjit.  Chitra was  a chorus singer in some of Lataji’s songs in the  1960, and  big fan   of  the Nightingale. After Chitra  coupled with Jagjit the duo became  a rage on stage.

“Pataa nahin  waqt kaise nikal gaya. Chitra and  I  became  so  successful we had no idea  time for  the album that I  wanted to  do with Latabai. Also,Latabai was busy with  numerous recordings day in and day out. We both needed  a phase of freedom and respite to  do Sajda,” Jagjit Saab told me.

Sajda  finally  happened  in 1991 after  years  of dreaming and delay. The credit must  go to Sanjeev  Kohli, son  of  the illustrious composer Madan Mohan and at that time  a top  executive at  HMV/Saregama,  who  pushed for  the  album  to happen.

How  much poorer the music world would have been without Sajda! The ground-breaking Ghazals,  7 solos by Lataji and  her 4 duets  with Jagjit Singh, plus   2  solos  by Jagjit are  architectural marvels. These are  compositions of eternal resplendence, each one  a selfcontained Taj Mahal of  a creation.

Then  there are  her duets with  Jagjit Singh, the only songs  they sang together: Har teraf  har jegah besghumar aadmi, Gham  ka khazana   tera  bhi hai mera  bhi  and Mili  hawaon mein udne ki woh sazaa yaaron…. 40 years after  composition, every song  in  Sajda sounds as fresh  and  accessible as  it was  composed yesterday.

Lataji  had spoken to me about  the  album Sajda  and Jagjit Singh:  “The first time I heard about Jagjit Singh, I was recording with Madan Mohan who told me, ‘Ek Jagjit naam ka ladka aaya hai bahut achcha gaata hai.’ When I heard his voice I was bowled over, but somehow Jagjitji’s voice was not considered suitable for film heroes at that time.As time passed his voice became a household name and he sang for many film heroes.But it was the song Sarakti jaye hai rukh se naqaab ahista ahista which I just couldn’t get out of my head. Jagjitji was highly influenced by Mehdi Hassan and gradually he moulded his voice in his style.He also met his future wife Chitra Singh and they became a very saleable Ghazal-singing couple. So many other couples subsequently tried to emulate the Jagjit-Chitra style, but in vain.”

Lataji revealed  that  initially Sajda, recorded in 1991, was supposed to have only her solos. “It was  supposed  to be  only  me singing to Jagjitji’s compositions. But I told him he had to sing as well. This was my chance to sing with a voice I had liked for years. Sajda was an idea put forward by Madan Bhaiyya’s son Sanjeev Kohli who worked at that time with HMV. They asked me if I would like to do an album with Jagjitji. I was game. Jagjitji got very emotional when I sang his composition Dard se mera daaman bhar de. He was going through a personal tragedy and the song touched his heart.”

The  personal tragedy that Lataji alluded  to was the death  of Vivek, Jagjit and Chitra’s only son who died  at age  19  in  1990. It left the couple shattered.Chitra never sang again. Another  renowned  singer Chithra from the South  also  lost her only child in a  freak drowning accident. She  too never sang again.