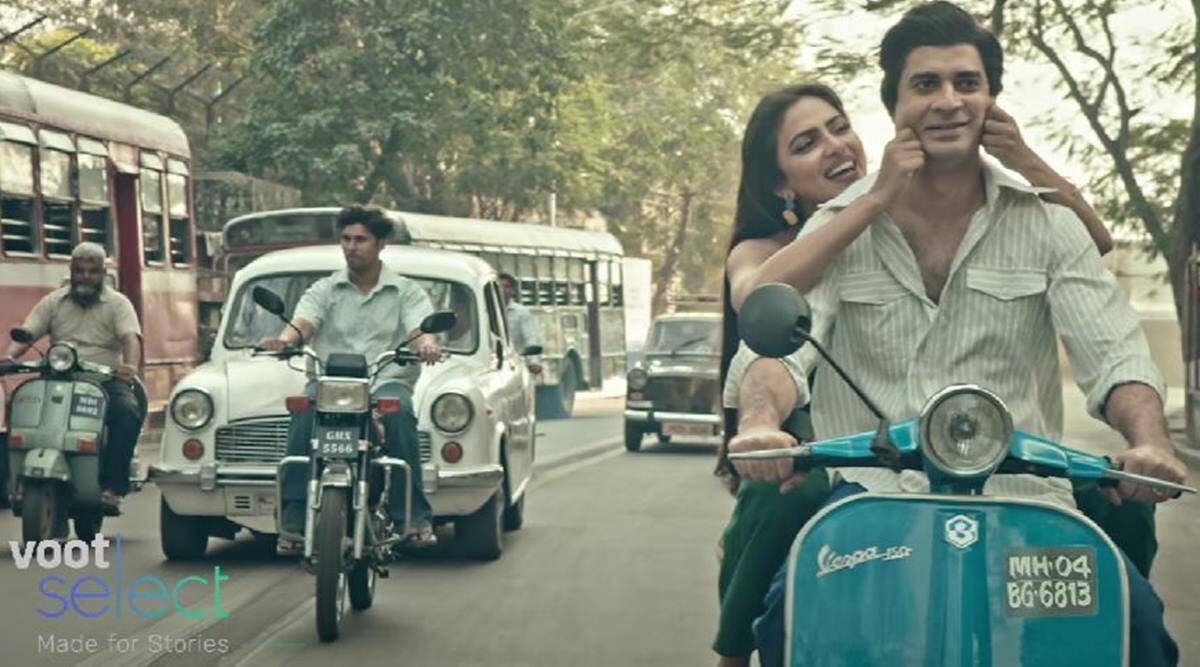 There is a watchman played by  an unrecognizable Uday Chandra who is  not really a watchman, whom our  filmmaker-hero Shankar, who is  actually Mahesh Bhatt in a hideous wig,  wants to kill…

…Or  so he says to the watchman(who is  not a  watchman  but a man who repairs watches, get it?). But  Shankar doesn’t really want  to kill  thw  watchman. He actually loves  the man to death.

Nothing is  what it seems in Ranjish Hi  Sahi. It’s all maya,illusion.  The  film’s  severely disturbed heroine is  NOT Parveen Babi. She is a seriously disturbed actress named Amna Parvez, so blindly and obsessively in love  with  ‘Shankar’(Mahesh) that she can’t tell his left testicle  from the  right.

That’s not Parveen Babi. And that poster up there is  not Amar Akbar Anthony . It  is Ajay Anwar Albert. How cool is that. And no, that’s not Amitabh Bachchan  ‘Amna’(Parveen) is  shooting with.In one specially distasteful recreation of a  real-life  incident  we can see a seriously  ill   Amna going blank during the shooting of  a dance number and falling to the ground.This was Parveen Babi’s  eternal  chartbuster Pyar karne wale  from Ramesh Sippy’s Shaan being recreated  for the sake of cheap thrills.

Zarina Wahab, the  best of the actors in this series, struggles  to give voice to Shankar/Mahesh’s Muslim mother’s role. Here is a woman who  “pretended” to be Hindu all her  life  for her deserter-husband’s sake. Like I said, nothing is as it seems in this series. We  saw Pooja Bhatt and Nagarjuna  play the same roles  in Mahesh Bhatt’s Zakham 23 years  ago.

The brazenly  cannibalized  characters just don’t know where to stop. They  are representational  of  a very tragic mental  breakdown  that happened  to  the very beautiful  Parveen Babi. The series, stretching into  8 langorous laboured  episodes of  Bollywood gossip and cinema folklore is   populated with actors in  ill-fitting costumes that  are meant to belong to the 1970s. The  mindsets  and  dialogues belong to the  stone age with evil characters shouting  that the “paagal aurat” should be  administered “current ke  do chaar jhatke.”

No current  thoughts are allowed entry into this primitive take on Husband, Wife and  Other Woman , in this case a woe-man destined to endless pulp interpretations all designed to show her in  the  most unflattering light.All I could say at the end of this cheesy clunky non-lather soap opera is…Rahem karo! Spare Parveen  Babi and us from such wretched  perverse one-sided interpretations of a stormy relationship .

This sickeningly derivative serial wants us to believe that Mahesh/Shankar  was  just a poor helpless victim   whom the  schizophrenic heroine threw herself on.  But the way Tahir Raj Bhasin plays  Shankar(a.k.a Mahesh Bhatt) the entire relationship seems like  a convenient arrangement  between a  struggling director and a  successful actress.

Bhasin  lacks  even the basic charm  required to make  him look convincing  as  a lover, let alone desirable.Amala Paul as  the pseudo-Parveen struggles with the mind demons of  the real character drawing blank most of the time.Her  inadequacies  as a dramatic actress are most apparent in her scenes with  Shankar’s wife Anju(Amrita Puri).

In  the last episode Amna Parvez shows up at Anju’s doorstep, all wild-eyed and spaced-out. Puri  in trying to look sympathetic ends up looking as though she is trying  hard to suppress her giggles. What a  grotesque  parody  of  the sequence in Mahesh Bhatt’s Arth where Smita Patil playing the  emotionally wrecked mistress pretends to pick up the beads  of  wife Shabana Azmi’s  mangalsutra  from the floor.

Ranjish Hi Sahi  tries hard to pick up the broken pieces of  a fractured  fucked-up  relationship that should have  been buried and  left untouched. Instead the series is one more attempt to tell us that Parveen Babi was  a nutcase and Mahesh Bhatt was the victim.