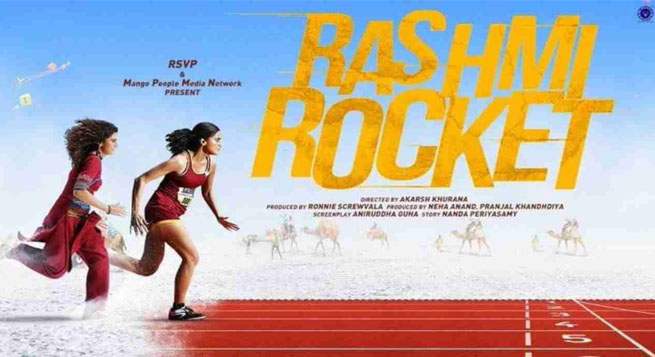 Towards  the  closing  of this  cannily crafted athletic sports  drama, Taapsee in  what’s  clearly a awards-nomination showreel moment  , talks to  her unborn child, giving us  a classic glimpse into her feminine  impulses… a womb with a  view,  so to speak.

The smoothly  turbulent script(we know exactly when and where  the  next storm is coming from) where we  are told in the credits  that Taapsee’s  Haseen  Dillruba writer Kannika  Dhillon has done some “additional screenplay”(in  other words, some  damage  control)  plays  it safe most of the way.

Given the  constraints of  a real-life sports drama  where the  protagonist is at once based on a real character and is an amalgamation  of all those female athletes who   have been subjected to  the humiliating  ritual  of a ‘gender test’, Rashmi Rocket does well for itself.

It is an amiable, charming film with no real flashy high points.But the  actors ensure  we remain invested in Rashmi’s rise-fall-rise trope . Abhishek Bannerjee as  the  out-of-luck lawyer who fights  Rashmi’s case in front of  a female judge(Sipriya Pilgaonkar) who seems  straight  out of  Law & Order,is  earnest enough to earn brownie points even  if he plays dirty to win.  But it’s for a  good cause.

I wish there was more of Rashmi’s romance with the army officer , who is so  supportive he gives  infidelity a bad name, and Priyanshu Painyuli  plays  the  ardent love interest  with such  fidelity I  wished there was  more of him in the plot.Rashmi’s  blow-hot-blow-cold relationship with her outspoken mother(the ever-dependable  Surpiya Pathak)  is  illustrative of the  film’s intentions: stay  in the safe  zone  and  whip up  excitement in that zone.The  recipe  rocks.

Clearly  the   script  is  not overly bothered with the  supportive cast,not even the skilful Varun Vandola who  ends up playing the dirty nepotist villain in an underwritten role.

This  is  again Taapsee’s  drama , and she embraces it with a confident  hug, manly shoulder  and all. Her  expressions of Rashmi’s  humiliation and defiance  are so faithful as to lift the drama  notches above  the routine.When it comes to selecting roles, Taapsee is  clearly  proving to be the Aamir Khan  among actresses.

While Rashmi Rocket remains charming and  well-intended  all the way, it could have easily avoided some of the more  blatant  pitfalls of  masala cinema,  like a song-and-dance at a wedding and Rashmi’s  arch-rival on the field coming out so suddenly in her defence in the courtroom

Such things  can  only happen in movies. Not that we  mind, as long as  the product remains as  patently true to  character as  this. Rashmi Rocket is Zee5’s  face-saving  gambit after an endless stream of  trash.