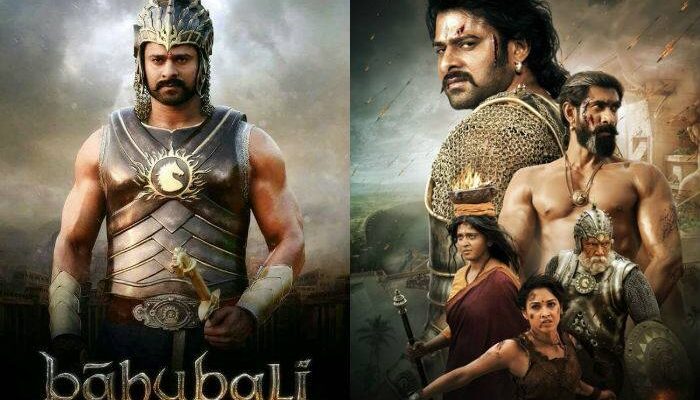 Baahubali : The Beginning(2015) Everything you thought would one day happen to Indian cinema, is finally happening …right here right now.

So you thought our films can never compete with  FX-driven films from Hollywood?

Think again! S S Rajamouli, that man who created a hero out of a fly in Makhee not too long ago, is back again to create the kind of spectacle which Indian cinema is financially and aesthetically unequipped to handle.

Baahubali with its harvest of breathtaking images all shot in the great wide outdoors with furiously flowing rivers and vertiginous mountains,  is  more marvelous than any movie created from the Marvel comics. It is a fable told with the kind of flourish that makes anything attempted in the genre look feeble and unkempt.

S S Rajamouli’s command over the epic language is worthy of deep analysis.

Yes this movie maker loves the visual medium. He makes love to the camera, nurturing nourishing and edifying every frame to the point where brilliancy is no longer a pursuit but a foregone conclusion.

Baahubali with its pastiche of pristine images conveying courtly intrigue, political ambitions, sibling jelousy, virginal romance and filial bonding is so riddled with the luscious images, you stop counting the blessings after a while and just flow with the divine spirit of a creator who makes cinema situated in the empire of the epic not to show off, but to to let the audience know that the orbit of opulence still exists, just a hop skip and waltz away from the kingdom of the crass that mainstream Indian cinema seems to have adapted.

Rajamouli structures an elemental tale with comicbook compulsions. The  film is flush with flamboyant visuals which take the fairytale narrative to a level of  lucid expression never experienced in our cinema. It’s hard to see Baahubali as a ‘regional’ film. So elevated is its aesthetics and so steep is the director’s appetite for weaving fantasy and drama that we are left gaping at the narrative’s mastery over the language amd grammar of mass-oriented filmmaking.

To those inclined to view cinema about kings queen and other fairytale subjects as juvenile, Baahubali is an epic revelation. While retaining  a core of innocence at the heart of narrative, the director ignites a spark of scintillating sensuousness in every nook and corner of the film. Every frame is a work of art,  thanks in no small measure to art director Sabu Cyril and cinematographer K K Senthil Kumar who imbue every frame with sparkling sublimity. Not that the individual scenes stand out in a look-Maa-I-can-jump kind of bravado. While swigning from one astonishing optic experience to another, the audience is also treated to a drama of a doomed kingdom so filled with heroic valour and mythical villainy it would have been laughable were it not so  lovable.

Rajamouli’s love for grandiosity is enchanting and endearing. His hero Baahubali is royalty in exile. A rogue in the mountains whom you can’t help feeling warm towards, Prabhas plays the role with a compelling candour. Prabhas’  Baahubaliid  destined for royal greatness. But before he gets to his kingdom, Rajamouli takes us through an epic journey saturated with romance drama and a battle scene  in the finale lasting more than 25 minutes which makes 300 and Hercules look like glorified video games.

It is no exaggeration to say Baahubali redefines the fantasy-adventure drama. It pushes the envelope so far, only the director’s stamp remains imprinted . Rajamouli’s imagination is a playground of incredibly lofty images. In one romantic song  Prabhas  shoots an arrow across rivers and mountains to make a ropeway to the top where his fantasy woman(Tamannah, part warrior, part-seductreess)  awaits.

It is a moment that defines not only Rajamouli’s steep aesthetic value, it also brings to light the cogent connection between valour and courtship. Frequently the film selects sequences that spotlight the hero’s mythical dimensions while bringing to the table the kind of hearstopping narrative  nubility amd nobility that constitute the highest level of kitschy art.

Rajamouli could be faulted for generating opulence in a purely fantasy format. He doesn’t aspire to change the world. His morality is straightaway from the Amar Chitra Katha comicbooks.Ek ttha raja , ek tthi rani….And no one lives happily after until such time when the characters flush out their penchant for bitter battles.

Baahubali presents the kind luscious and lavish cinema that transports us into the era of courtly intrigue without any of the characters faking their oldworld charm.

Prabhas and Rana  Daggubatti playing the main protagonists and antagonists play off against each other without snarling and snapping in every frame. Pradoxically while entering world of larger-than-life heroics, Rajamouli succeeds in keeping the sitituations in the script remarkably restrained.

Baahubali is not a film. It’s an event. Every frame whispers a saga of tasteful reined-in aesthetics. The scale of visual grandeur seen in Baahubali is unprecedented.

Wait. There is more. Rajamouli promises a sequel next year. I can’t wait to see where this oldfashioned morality tale takes us next.

Baahubali  2 –The Conclusion(2017):  By the time the enrapturing narrative actually arrived at the key plot point—why did Kattapa kill Baahubali? —I had forgotten that this question had haunted the nation for two years. There is much more to the second and tragically, conclusive and concluding segment of the Baahubali saga than the Kattapa query.

So much glory grandeur, and above all such spectral wisdom. By the time we finish watching Baahubali 2 – The Conclusion we are far better informed about human nature and its tendency to betray those whom we love the most.

Yes, Baahubali 2 is much bigger than the first film in every sense. It is far deeper and dreamy, drawing us into its magic and magnificence with a seamless swoosh that sucks us in. We fall into the ravine of ravishing courtly machinations with no desire to pull ourselves out of the hypnotic spell that Rajamouli casts on us.

Before we know it we have entered Rajamouli’s enchanting kingdom of Maheshmati where intrigue, treachery, passion and redemption straddle in a tight embrace riding together in a chariot of ire that hurls across cinematic vistas never explored before. The episodes come together in unexpected ways, generating through the drama a repertoire never-experienced splendor and spectacle. The swirl of colours on the sets and in the costumes is like Moulin Rouge on a Devdas trip. But the treatment vision and the characters’ karmic quirks are all peculiar to Rajamouli. He courts the epic without drawing attention to the enormity of the scale that his vision dares to climb.

That Rajamouli is an extraordinarily skilful storyteller goes without saying. He wastes no time in introducing the characters. We are supposed to know them first hand from beforehand. And even if there are some viewers out there who haven’t seen the first Baahubali film, the plot  uncovers in sweeps and streams of majestic arrogance that accommodates our ignorance of the characters’ background and our unconditional awe for the film’s visual spectacle in the same range of  vision.

The second instalment of the great Baahubali franchise is so lush, luscious and luminous it’s like being transported repeatedly to a paradisaical peak, not once not twice but over and over again. Rajamouli spins an enchanting web of  images that seem taken straight of the Indian mythological tales, mainly the Mahabharat. But he gives it his own splendid spin. A spin that makes our heart swell and heads spin.

This work of exquisite mythological art is easily the acme of cinematic achievement, a landmark to beat all landmarks, including Rajamouli’s first Baahubali film which in hindsight seems more like  a blueprint for the main event that is the second part of the franchise. True, at  a few minutes less than three hours, this is a lengthy epic. But an epic in the truest sense where the dramatic conflicts and battle-field confrontations merge into a fulfilling magical journey into Neverland where anything and everything can happen.

The film’s twists and turns are so coherently and tautly worked out, that not for a moment do we feel we are watching a drama that has no bearing to contemporary reality. True, the performances leave much to be desired. Barring Anushka Shetty who is elegant, regal and tragic, and Ramya Krishnan who exudes a blend of matriarchal pride and feminine intuition (the confrontation between the two actresses is among the highest points in the storytelling), the male cast is hellbent on hamming all the way. While Rana Daggubatti wears the same expression of disdainful scorn throughout, Prabhas seems confused every time he has to speak a line that has more than three words. Both actors come into their own the minute they galvanize into action.

Rajamouli’s period drama flaunts characters who are confounded by a fate far larger than their fighting abilities. The war sequences, fearsome and awe-inspiring beyond anything we’ve seen in Indian cinema and shot by cinematographer K K Senthil Kumar with a penchant for lavishness that goes well with the film’s deliciously ripened feel flavour fervor, show not just the character’s valour and heroism but also expose them to be vulnerable mortals who, for all their deified posturings, are susceptible to the rules of mortality much in the same way that we ordinary mortals are.

Portraying a world of larger-than-life, mythologized and anointed by a destiny that disperses drama, Rajamouli takes us on a journey so grand, epic, enchanting and unforgettable that it would be impossible for us to look at any other costume drama with respect, let alone awe.

Who would want to live in a cardboard kingdom after entering Rajamouli’s world of marbled marvels whose floors and exteriors glisten with pride and passion?

Is the Baahubali saga really over? Truly the end of era!!

French Exit Dream Cast But What A Nightmare!