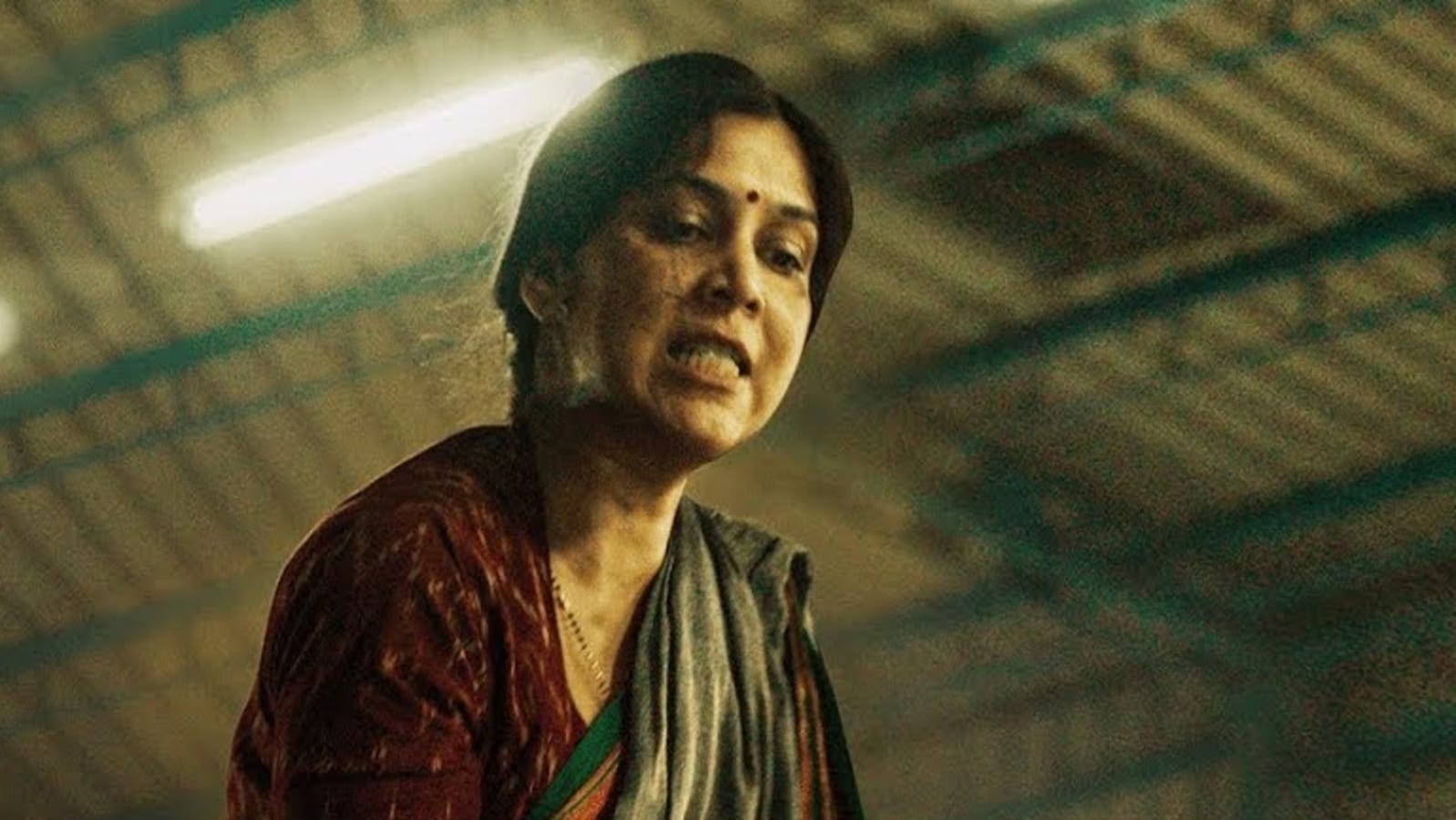 The grieving mom  out to avenge her daughter’s murder is  not a new subject. We’ve seen  Sridevi do the vengeful mom’s act in what turned  out to be her final film. In Mai Sakshi Tanwar is  a portrait  of  anguish  and rage as her mute daughter is  killed  in a staged  road accident From here Sakshi’s Sheel goes into a loop  of vengeance  and vendetta that seems real only when she is  vulnerable.

There is  a  chilling  sequence in Episode  3 where  Sheel is  accosted by  two very dangerous goons as he emerges  half-dressed from a bath.. One of them pushes  Sheel to the wall and threatens to rape  her.

“I will give you  a better time than  your husband,” he  warns her as he pushes his hand in  her blouse and his pelvis in her petticoat.

It is a shocking moment, perhaps never seen in Indian cinema, where  a decent  respected  housewife is slut-shamed for snooping around to  find her  daughter’s  killers.

Think  about it. A grieving mother  hence  a woman of inviolable sentiments,violated with such  crude brutality.

The actor performing this heinous  act of  violence is Vaibhav Raj Gupta, so endearing  as the elder son of a normal middleclass family in Gullak ,here transformed  into a puppet perpetrator   of violence. His  character  Shankar too must have been from  a normal family . I imagine the son in Gullak losing his job and transforming into this menacing villain in Mai.

Vaibhav Raj Gupta’s brilliant  take on masculine toxicity  gradually crumbles and we realize he is  as broken as Sheel.

“You will do anything for your  family. I will go to any lengths  for my daughter,” Sheel  tells Shankar in another memorable moment of  raw reckoning.

There isn’t enough of those  memorable  moments in the lengthy six  episodes to keep us invested  throughout. Sure, the grieving mother’s  vigilante act is  emotionally  charged  and potentially explosive. We  get that. But the  way Sheel goes from  broken mother to determined vigilante just  doesn’t make any sense.

The writing, though strong at some points,collapses  under the weight of too many  subplots,some interesting, others are  just  impediments to the  smooth  journey  of  a narrative that attempts to record an ordinary working-woman’s  trek  from  grief  to rage.

Sakshi Tanwar brings an impressive volume of emotional  urgency to  her role.But many other good  actors  are only wasted in parts  that don’t get breathingspace  in a  plot  that creates a  stampede  of clamouring  characters.In the beehive of  activity, there is  also  a  family  tension  brewing  in the  backyard as Sheel and her husband Yash(Vivek  Mushran who  deserved  more space)  and his elder  brother and  Bhabhi  fight over Sheel’s children’s upbringing.

There is  an arresting moment between the two sisters-in-law  with  one of them spitefully telling Sheel that her daughter  was lucky to have died ; or else she  might have  become like her mother.

I am not sure if that remark about Sheel is unfair.She  is  so determined  to get justice for her slain daughter that she cannot see all the  feelings that she is  steamrolling. She hobnobs with very dangerous criminals ,even outwits them  repeatedly, and that  includes the  villain’s  mistress/wife Neelam(Raima Sen) a woman who doesn’t think twice  before annihilating those who betray her trust. Prashant Nayaran  turn up twice, first as  the  crime kingpin who gets bumped off in the  first episode and  then  as  a  snide  nasty  serial killer  who goes on a rampage  in the final episodes.When he is asked to leave  after the  bloodbath  by his hirers he gets the most ominous dialogue  of the series. “I am the  kind of piles that  never goes away,”

I  do hope  the same is not true  of the series.  I have really had enough of Mai.And no matter what she wants to do  or say  next I am not interested.