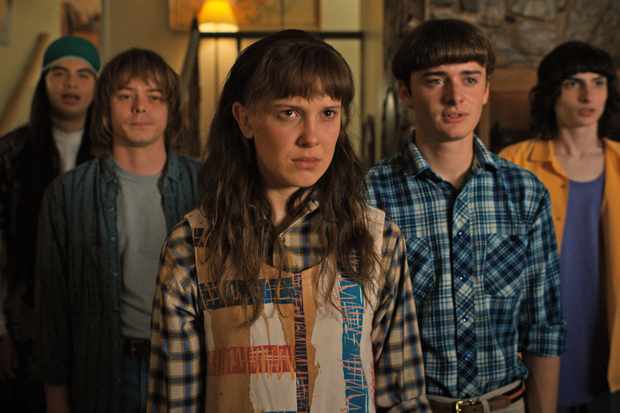 First things first. The  fourth season  of the  vastly popular  franchise series , runs out of steam in  no time. Before long I was asking myself  if I wanted  to spend seven hours of my life watching  a bunch of teenagers being taunted and  haunted by  mean evil spirits with faces that had seen better days.

Ghoul is clearly cool for the bunch of teenagers played by young actors who are famous now in their right, having lived through  the battering ram  of  this serial’s  writing skills. These youngsters have  clearly seen  ‘batter’ days. They look prematurely aged, if not commensurately wise. The writing, subversively clever,ensures that  the  kids make the same mistakes again and  again.

Given the  repetitive pattern of  the plot, some youngsters emerge in a better light, strangled as  it is  by the oppressive darkness, than others.Max, for  example, played by Sadie Sink, a fiery young girl with rebellious eyes is a better scripted character than  most of  the other kids whose limited range of  interest  is matched by their  ability to make their characters seem interesting.

Max has the fourth season’s best  body-snatching episode when the  mysterious  evil force  tries to get her to end her life.Bathed in blood-red  filters the moment of Max’s  combat with mortality had me riveted  like  nothing else in the series.

The rest  of  the episodes this season  plod along  with no hope of relieving the tension in any  away except by reliving it. The  drama works in a loop, dilating and expanding outwards in  sheaths  of shallow eeriness . The shock value  has long run out of steam, What we  get here is  more of the same,in a far more dense and  brackish brew.

The  young actors are  almost  uniformly stilted in their  simulated spontaneity. But it is  the  senior  actors who really get the raw end of the stick. They come across as daft goofy or both. The once-fabulous  Winona Ryder plays  one  of  the  mothers of the teenagers  who takes  off with one of the fathers  to rescue the love of her life from Russian captors in Alaska.

The rescue operation is   silly and illogical especially at time when the kids  back home are going through  a kinetic  supernatural trauma.

I don’t know  how much of the rational component  one  is supposed to apply to  the goings on.The series is  woefully wimpy in execution. Long passages of  the narrative try to  strike  a balance between shivers and giggles, failing to achieve  a balance between the  two.

I don’t know what  stranger things await us  in the future. But this time the  mood is all muddled and misconstrued. There is  big difference between being strange  and  being stupid.