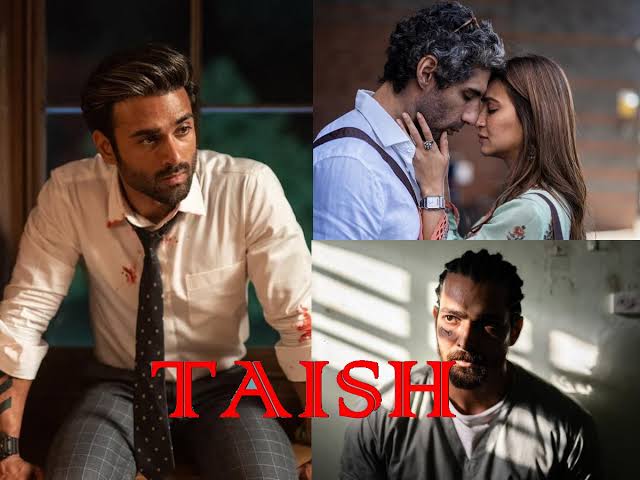 As I  finished watching this lengthy masterpiece, indeed  a masterclass in  adroit storytelling with  room for every character to breathe even when they are destined to  die,I  thought not for  the  first time… Oh Frog,  what am I doing watching this  at home???!!!

Taish  is  a big-screen experience in every sense: big emotions,  big egos,  big fights,  big vendetta , big screams, big silences…This is  the  kind of internecine vista  of  continuous  bloodshed  and vendetta  that would end up being no more than an exercize  in gratuitous violence  in lesser  hands.  Not Bejoy Nambiar.  I’ve watched  his work   closely and  admired  it since he  started  with Shaitaan.

Today  Nambiar has leapt far ahead  of his mentor Anurag Kashyap. Taish is  proof of it. It is so sinfully  engaging that I couldn’t take my eyes off the screen  for even a second.And never  mind  the size  of  screen.Smothered screams  of anguish that  never escape the  lips of  the  myriad characters  hover in the air in this  beautifully  mounted  saga  of affluence, crime and vengeance.  Every character  is anguished, torn  , doomed. Even the  buoyant Pulkit Samrat, appropriately named Sunny who comes to his lifelong  buddy Rohan(Jim Sarbh)’s  kid-brother’s wedding …only for the festivities to turn into ashes as  bullets fly  , remembrances  of stings  past mingle into  vengeance  in  the present.Oh, what a royal mess life can be!

Taish is  not a film that lets  you relax for even  a second. Even  the lighter moments  are  infused with an arsenal potency. There is  a brilliant pre-wedding dinner sequence where Rohan’s  father  tries to bait  Rohan’s Pakistani girlfriend  Arfa (played with  a natural grace  by Kriti  Kharbanda) . The  way that  lengthy sequence  builds  up into a fireball  of funny feisty and fearless dialogue is a sign of mature and  skilled writing. A  shout-out to the exceptional writing skills of  Kartik R. Iyer,Anjali Nair,Bejoy Nambiar  and  Gunjit Chopra.

This is a film that  shatters  the  hearts  of every character  and then  let us, the audience,  pick up the  pieces  from the ground.While every character stands out   the crafty screenplay is owned  by Harvardhan Rane’s Pali.A lover, a killer  a helluva  tormented  soul, Rane’s eyes tell  it like it is. He’s a  revelation. The  other actors too, every one of  them  from Ankur Rathee as a doomed groom to  Saloni Batra as an outlawed  daughter-in-law,  gets  into the swing of  things with a ferocious fluency.

A special word for Pulkit Samrat  who starts off  as  the somber plot’s comic relief and ends up as  something else…how long is  the  film industry going to neglect this versatile effortless actor?

Outwardly it’s a story  of  two affluent families  at each  other throat.  But to  see Taish as a revenge saga is  to  look at  Devdas as a  story on  alcoholism. There   is  so much going on beneath the surface that one viewing  isn’t enough. The simmering  discontent  beneath  the surface is  placed against the  striking beauty of the English locations. Cinematographer Harshaveer  Oberoi is director Nambiar’s accomplice-in-crime.Nambiar calls the  shots. Oberoi pulls  the trigger.

Picture-perfect and  turmoil-infested,  Taish is  at heart two love stories  about  star-crossed  lovers  .Jim Sabh-Kriti Kharbanda   and  Harshardhan Rane-Sanjeeda Sheikh’s  passionate alliance   is  so passionately  put across  I came  away  wanting to  know  more  about their relationship. I intend  to  watch the extended  6-episode  version  of  this fine feature  film as soon as I can. I recommend the same  for all.