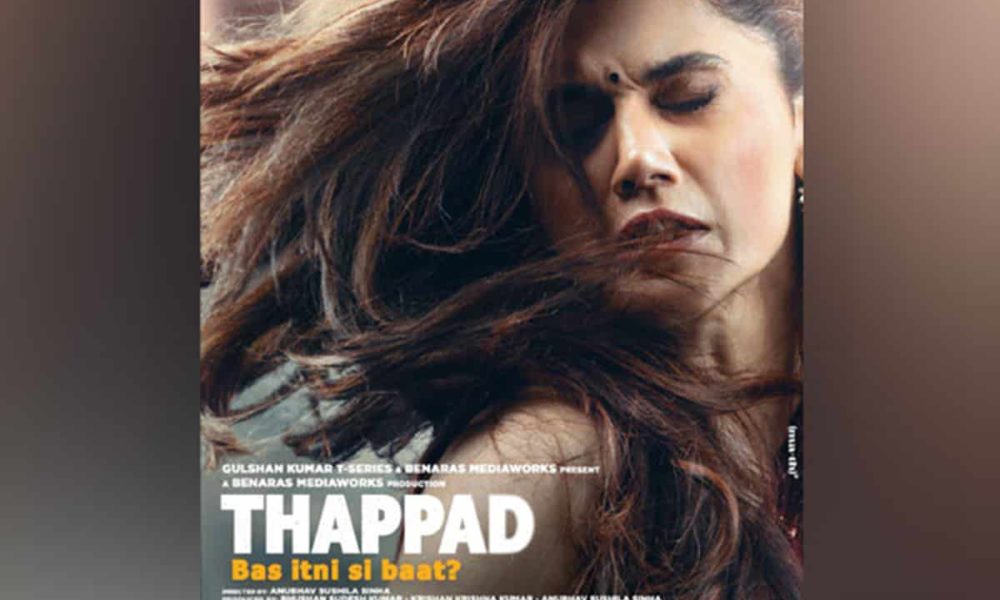 Thappad Review: Let’s face it. Damaged  humanism, fractured  emotions  and  flawed  relationships  are  the  crux of Great Cinema.  If  there was no Auschwitz there  would be no Schindler’s List. If Madhubala  had not died  so young would we still think her  as  being so  unattainable?And if  Romeo and Juliet had  lived happily  ever  after would  Shakespeare’s play have  become  a timeless classic?

Also Read: Anubhav Sinha: “Thappad Is Dedicated To My Mother”

Thappad is  a  flawless  film on  a fractured  marriage.It  is  one  of  the  most  important Indian films in recent times. Like director Anubhav Sinha’s  last two monumental  works Mulk and Article 15, Thappad tears at  the  hypocrisy  of  the middleclass  to show how  pathetically short we  fall as  a  collective nation  when it comes  to basic  human rights even within the  four walls  of private homes.

The  issue in Thappad is ostensibly solvable. A well-settled  housewife Amrita(Taapsee Pannu, in her  best yet)  from a upper middleclass  Delhi  family takes  a  slap  from her husband very personally. The husband, poor guy, is bewildered by what he sees as  her over-reaction.

“Ek thappad hi to ttha!” Amrita’s husband Vikram keeps  mumbling in rote, driving in the point of how monstrously  organically  entitled we men  in our  country have become. Driven by the dearth of  reality checks, the rules that regulate  and  normalize  male dominance  have  become acceptable behaviour  in even the more enlightened  sections  of  our  creaky social set-up.

Anubhav Sinha has a problem  with that. Layer by layer,  he peels off  the  veneer  of decency that glues  a majority  of marriages  together,finally putting the men in the plot in a no-win situation. Even the  sole seemingly liberal husband, played by the  ever-dependable Kumud Mishra, has  to  sit in wide-eyed  astonishment as  his wife (Ratna Pathak Shah, slightly over-the-top) reminds him that she sacrificed her singing career for the sake of  the family.

Who knows, we lost another Lata Mangeshkar?

In spite of the  screenplay’s  mischievous tendency to put  all the men in the  dock(even the  lovely Dia Mirza’s  husband is made to feel guilty  from the grave), Thappad is an unflinchingly hard-hitting look at the lives of diverse women who are  allotted portions of dignity  as dictated by their  spouses. She can be a high-profile  high-flying lawyer as played by  the imposingly  impressive Maya Sarao. Or an economically challenged house-help ,played  with smashing  persuasiveness by Geetika Vidya  whose  drunken  husband slaps her around for drunken entertainment…Each woman in  Anubhav Sinha’s  scheme of creativity  is a masterly study  of  grace under pressure .

While  every  actor , male or female , sinks into character with intuitive dedication, special mention  must be made of Pavail Gulati as the slapper-husband who  brings  a great deal of relatable  conflict to his   part, imbuing his unplanned  dirty deed with a kind of strange inevitability.Other male actors who make the best  of a thankless job are Kumud Mishra and Ram  Kumar who incidentally is  the only male without  spousal guilt (though I am  sure he has a  wounded wife  somewhere away from this Sinha’s scintillating  script’s  penetrating gaze).

Make no mistake about it. Thappad belongs to the ladies: Geetika Vidya, Maya Sarao(her husband’s  ill-etched role is a minor aberration), Tanve Azmi and  above all Taapsee Pannu  who brings to her  hurt wife’s role  a  heroic  dignity and a distant  poignancy that distil themselves in a performance of screaming silences. I  dare any  other contemporary actress to equal the sheer persuasive  power  of Taapsee’s performance. Her lengthy monologue with her screen-Saas(Tanve Azmi) where she  confesses to  why she feels like  a failure as  woman wife and individual,  will be played at awards  functions  in  the nominations show-reel.

The  triumph  of  Thappad is also the triumph of tonal  perfection. Soumik Mukerjee’s  cinematography as well as  Mangesh Dhakde’s background score create a distinct mood for each of the women and their episodic  excursion from Victim to  Survivor  to Hero. The distant banshee of the shehanai  in the  background serves as a mocking reminder  of  the marital vows and their subversion  in contemporary times.

Thappad can either  be seen as  a powerful parable of women’s empowerment or  a scathing ironic  indictment  of  the way that  empowerment  is subverted  . The writing is so sharp it  cuts open our collective perception of what  cinema about marital  imbalance   should be. This is Anubhav Sinha’s third masterpiece  in  a row,  and the  best yet. I  can’t wait to see where he goes next.