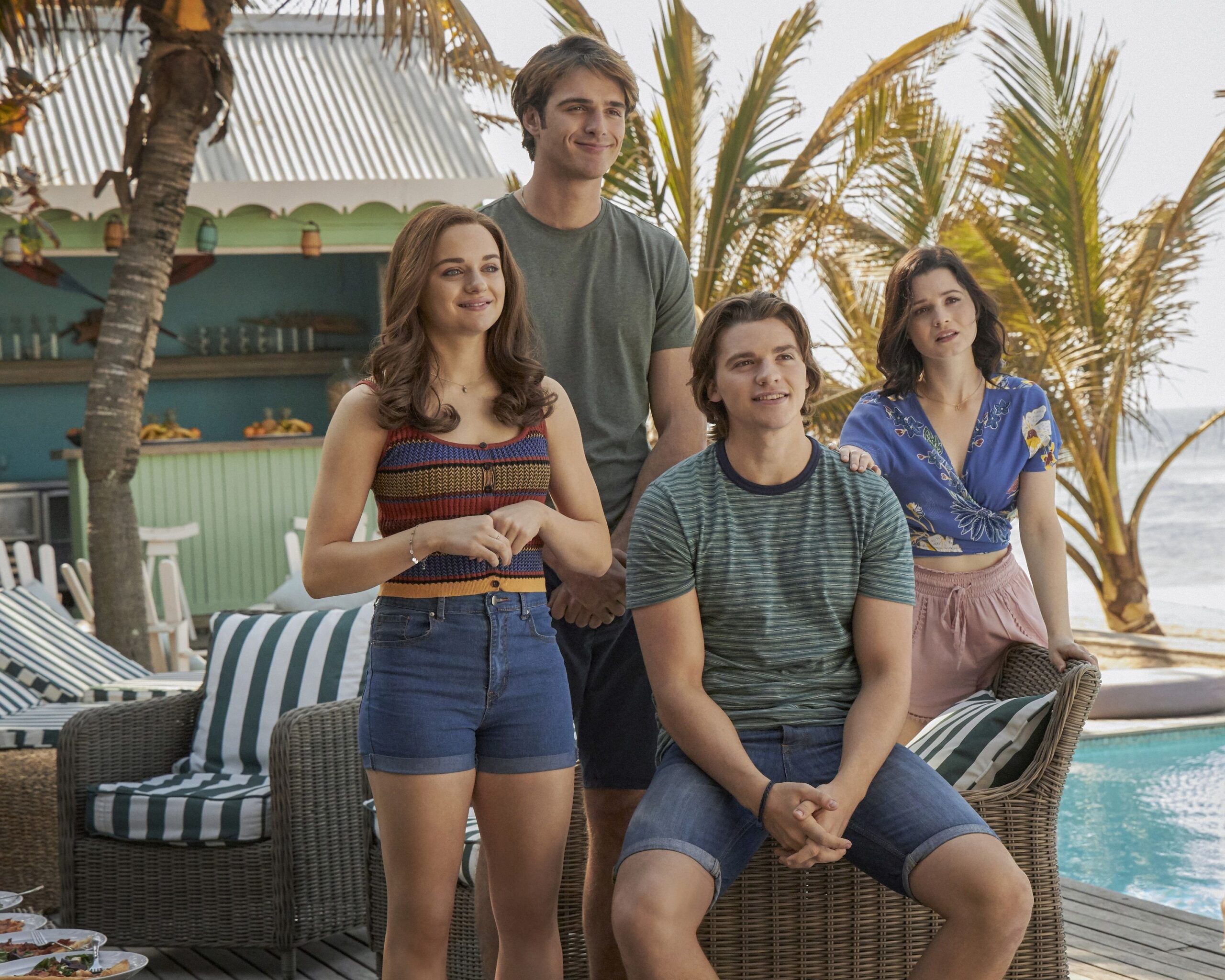 Director
Vince Marcello
Writers
Vince Marcello,Jay Arnold,Beth Reekles
Cast
Joey King,Joel Courtney,Jacob Elordi
Plot
It’s the summer before Elle heads to college, and she has a secret decision to make. Elle has been accepted into Harvard, where boyfriend Noah is matriculating, and also Berkeley, where her BFF Lee is headed and has to decide if she should stay or not.

The Kissing Booth 3 Movie Review: You know what?  I  quite enjoyed  the third and final part  of Netflix’s silly but savvy Kissing Both series, probably  because I knew there wasn’t going to be  any more  films in the series.

No. just kidding.I think it’s  more to do with the fact that the three protagonists  have  ….ummm…I wouldn’t say evolved, but yes,grown up quite  a  bit since we  last met them. Lee(Joel Courtney) is still  Elle(Joey King)’s best friend.  Lee and  Noah(Jacob Elrodi) are still lusting after one  another…in a  manner  of speaking only. In reality,  there is  no sex in this Booth. Not much kissing either.

Director Vince Marcello keeps the proceedings  amiable  and  sanitized. These  youngsters pushing  into adulthood, tempting their teens  into selfindulgence are pretty much sorted in their head.Plus it helps that Joey King plays  not just a young adult struggling  with  college preferences and a new girlfriend for  her father who is  anything but the archetypal Wicked Stepmother.  She plays a real  young woman struggling to know  if she must do what  her boyfriend expects her to be.In fact some  of  the  most  whistle-worthy moments  find  Lee’s stepmother-to-be promising  not to step into Lee’s  mother’s precious shoes.

Also Read:  Rakesh Roshan Says He Is Yet To Lock In On Krissh 4 Script

The narrative  leaves  no swoon unturned, assisting Elle in finding True  Love. Having failed  to do so at the end, we are left looking at a vast empty but  interesting space  ahead  for Elle.No one comes  out a loser here. The charm  of  the Kissing Booth series is  that it takes no sides and yet has room in its heart for everyone.

Not to put too fine a point on it.  But Kissing Booth is a  very goodlooking film. This  time much of the charming drama unfolds in a beautiful beach house owned by  Lee and  Noah’s mother   played  by veteran Molly Ringwald who once was a tangy teenager  in  Sixteen Candles and The Breakfast Club looking for the same things that the  young protagonists  in the Phone  Booth are.

But the most beautiful sight in The Phone  Booth 3 is  Maisi Richardon Sellers  who plays Chloe, Noah’s  special friend  who  by the end  of the film, convinces Elle  she  is  no threat  to Elle.

So all right.  These  young people are not  into environmental toxicity and gender rights. But  their concerns are  genuine, at  least  to them.Just how much of their heart problems will affect  you will  depend entirely on how cynical you are about Mills & Boon love, and booth kisses.