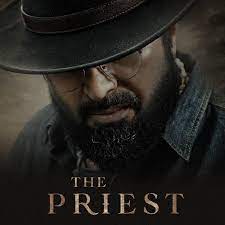 This  shiver giver about a  little girl possessed  by  the spirit of  a dead woman who is too close for comfort, is neither  scary nor innovative  enough to qualify as a  genuine  supernatural-horror thriller. Bordering on the  bland, and  oscillating between  the creepy and  the (unintentionally) comic it features,Mammoothy as a priest who spends more time tracking down murderers and  criminals than addressing congregations in the church.

Come to think of it,  we hardly ever see Father Carmen Benedict  in the church or in   priest’s rob.He is the evangelical equivalent to those  filmy cops who want  obey the rules.  This is really for the best . Mammoothy looks like anything but a priest. This is the  only film where I’ve seen him out of league with his character.

The  first 45 minutes  of  the  film form an independent unit, like  an episode of  Aahat, separate  from   the rest  of the narrative when  a weird  little girl from an  orphanage  Ameya(Monica) begins to show  an unhealthy  attachment to a  teacher Jessy Cherian (Nikhila Vimal).  The  little girl who plays the  eerie  spirit has obviously been given broad stroked instructions by the  director to  grin in a  vacuous way and stare at people as if she  was  counting the pimples on their faces.

Yes, the  little girl really ACTS, leaving Mammoothy’s exorcist act looking quite tame in comparison. The last 45 minutes  of  the  purported  goosebump-fest   topples over with fright fatigue. The  ill-lit mansion where the lights go out(somewhat  like the one in the  other failed fright fest Irul ) … The  director tries every trick in the  book to scare us.Ameya  walking on the ceiling. Ameya  throwing her weight around. Ameya disappearing and  appearing…But the  mood  never gets dark enough to intimidate us. There is  way too much effort  put into the task of  scaring the  yell  out of us. The shrieks  are just not  earned by the feeble  unconvincing  plot. By the time we  get to know Ameya’s other-worldly connection with Jessy  we are  far too distanced  from the  circle of  credibility to care  about motives.

The Priest is  designed as  a scary seance that  never takes off. Forget about waking up the dead, I found  it hard to keep awake though  nearly two-and-a-half hours of  this sluggish slog of a  narrative with not one  performance  to hold on to. Not even the redoubtable Mammoothy. His heart  just doesn’t seem to be in it. Can’t blame him.This  priest  must be cross.

On the plus side Akhil George’s cinematography  catches the  mood  of  the  blocked sun in the characters’ eclipsed life without losing light.The camera  know  what is  looking for.Wish the  characters  were as  motivated.