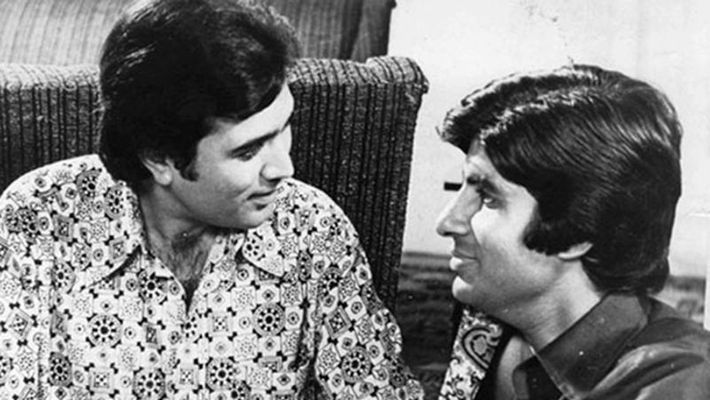 Only Hrishikesh Mukherjee could dare  to bring the  reigning superstar  Rajesh Khanna and  the upcoming   Amitabh Bachchan in Anand  in 1971. Four years  later when  Hrishida  cast them again  together in Namak Haraam  he was  advised to  retrace his steps before  it was  too late. Because  by then  the Bachchan had  already dethroned  the  Khanna and the latter  didn’t feel too good about it.

But  Hrishida was adamant. He  was sure his two protégées would behave  themselves. Sure enough things went smoothly  during the shooting until it came to  the climax. The  question  that cropped up  was,  who among the two stars   was  going to die at  the end?  Khanna  who suffered from a  death  wish  on screen  , felt the  ‘privilege’ was  rightfully his.  On  the other hand the Bachchan felt his  character’s death made more sense in the plot.

So what did Hrishida  do?  He sorted  the  problem by  withholding  the  information on the death scene from the actors.  He  didn’t reveal  who was going to die  to either  of  the two stars until the day when the death sequence  was  to be shot. On that day he announced  the  ‘privilege’ by putting a garlanded photograph of the chosen one  on  the set in the morning before shooting.

For  the record , the one chosen for  the   privilege was Rajesh  Khanna.

Rajesh Khanna’s love affair with death began in his career-making film Aradhana when the airforce pilot Arun perishes leaving behind his pregnant girlfriend to face stigma and ostracizing. Khanna romanced the most beautiful women on screen but went to bed with death.

After Aradhana he made a career out of playing doomed characters.A year later in Asit Sen’s underrated masterpiece Safar played an artiste dying of cancer.This was the second fim that proved how comfortable the actor was doing death scenes.He virtually relished the moments when his character gasped his last. During the same year as Safar he again smiled his way through cancer into death in Anand, immortalizing his career by taking on death headlong

With the help of  directors from the Bimal Roy school of filmmaking like   Hrishikesh Mukherjee, Asit Sen, Shakti Samanta and Raj Khosla, Rajesh Khanna repeatedly created the persona of the tragically doomed hero.A post-modernist Devdas.

In 1974’s blockbuster Roti Khanna is gunned down at the Indo-Pak border as tries to cross with his girlfriend Mumtaz. By this point in his career Khanna was unnecessarily imposing mortality on his characters.In several of his post-superstardom films like Prem Nagar, Amar Deep, Avatar, and Dard we can see Rajesh Khanna strugging to bring his characters to a tragic closure merely out of habit.He had forgotten Anand’s philosophy. Zindagi badi honi chahiye lambi nahin.The same goes for mortality. The death wish cannot be used as an extended tool for artistic impact .

Are Marriages  In  Bollywood Crumbling During The Lockdown?