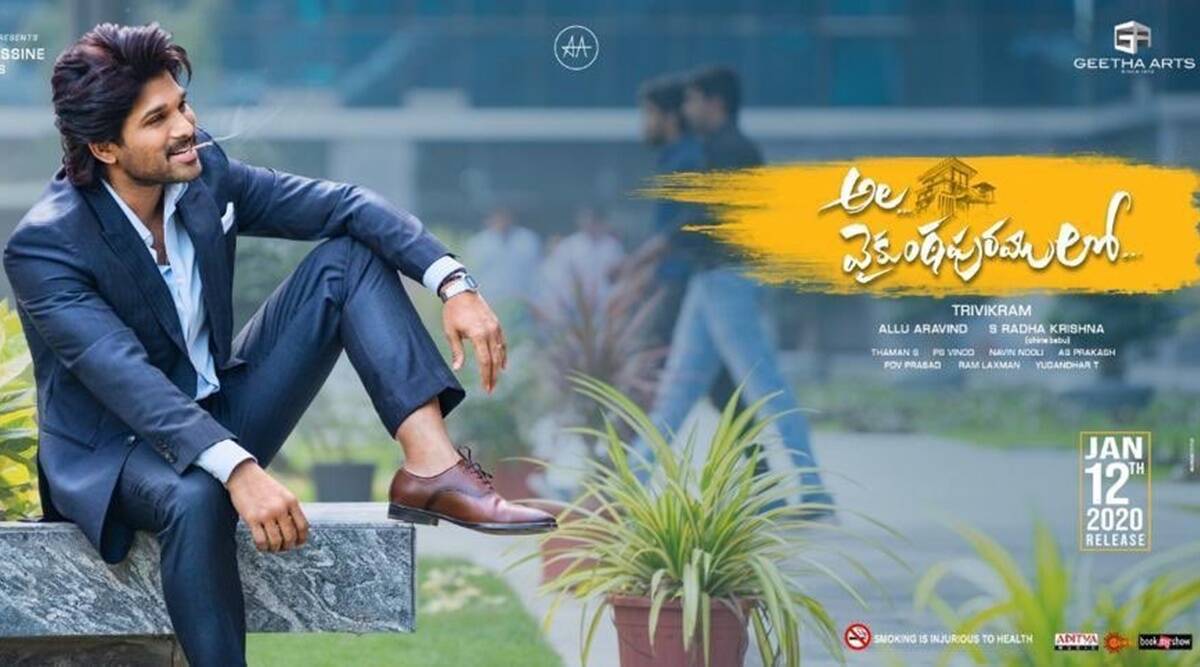 Right before the pandemic broke out in March 2020,  Telugu superstar Allu Arjun had a massive success in Telugu called  Ala Vaikunthapurramuloo. Released  on  Makar Sankranti  2020 it was one of Indian cinema’s last  big successes before the  first lockdown.

As far as star vehicles go Ala Vaikunthapurramuloo is a masterclass of  cine-seduction, with Allu Arvind presiding over the  oldfashioned but  engaging plot  without  overwhelming  the proceedings. There were  episodes  in the  hero’s exhibitionism–almost  like one  super-enticing item song after  another– when Arjun unleashed  a kind of tantalizing  crowdpleasing tamasha that  takes  his  inherently  persuasive  screen presence  to dazzling heights of virtuosity.

Playing the  do-gooder  with a heart of gold  who can without any warning, turn into a fire-spewing dragon, Allu Arjun has many occasions in the  film to show the audience who the real boss is.

But the Allu Arjun  ‘item’  that had the audiences roaring in approval , and the one that would be  almost impossible  to pull off by any actor except Allu Arjun , is  the  sequence in a boardroom corporate conference where  Allu’s character Bantu makes his point  to the gawking  executives(one  of whom even  joins the Superstar in his  swag  spree) by singing old popular Telugu film songs. By  the  time Allu Arjun comes  to “Abbanee Teeyani” from  Jagadeka Veerudu Athiloka Sundari  he makes it clear  to us that he’s a Chiranjeevi fan.He is also not  above leering at his  girlfriend Pooja Hegde’s legs as though they were food on his table.Ms Hedge  doesn’t mind  the gawking, so are we?

Luckily for  Allu Arjun, the  screenplay provides  him with  ample opportunity to  play  the traditional do-gooder  with an aplomb that’s entirely his own. No Telugu actor in  recent times has been seen doing the  crowdwooing  thing so  effectively. The  weatherworn  plot about long-lost children  being exchanged at birth could  have been killingly  hackneyed.  Arjun  and the supporting cast specially  Jayaram and Tabu (as  a long-married couple with complex issues that warrant a separate  film of  their  own) and Sachin Khedkar(as Tabu’s privileged  father with  a mischievous glint in his  eye) ensure  new life is breathed  into a weatherworn tale.

The film has  outstanding  dialogues ,which salute  oldfashioned sentiments , and that includes  movies and actors of yore,  without bending backwards to be  cutely  reverent. At one point when Khedkar employs Allu Arjun to work for  his company  someone wonders in what  capacity  Arjun is  being  hired.“Until we  figure that  out he can  ogle at girls on the internet,” the  old man winks.

One of   the many songs and dances(I didn’t mind the frequent song breaks, as  the choreography  is constantly fresh) makes a reference, to the loved one being “silent like the audience at a multiplex.”Niiiiiice.

No doubt the  film will be  a roaring hit,for Allu Arjun in  a dubbed Hindi  version when  it opens on January 26.

I had spoken to Allu Arjun just after the  release   of  Ala Vaikunthapurramuloo and was on Cloud 9(Covid  back in January 2020 seemed a  minor threat). “I’m overwhelmed. It’s also very humbling to be given this  kind of  response,” says Arjun  whose career since 2003 is cluttered  with blockbusters.The two things that I  keep  hearing repeatedly about  Ala Vaikunthapurramuloo is   that it’s a one-man show, and that it has repeat value. As far as being a one-man show goes, I can’t take the credit for  my performance. Full credit must go to my director Trivkram Srinivas.”

Trivikram and  Allu Arjun have worked  together before. “Yes, we teamed  up in  Julai and S/0 Sathyamurthy  before. So  there is a  huge comfort level. We needed to  do something different  within the commercial format.The  story(of babies getting switched  at birth) has been done  repeatedly  for generations. The  freshness had to come in the treatment, not in  the plot.”

Arjun  said  he  tried to  do something  different in Ala Vaikunthapurramuloo  with his performance   even  while  adhering to  the  needs of a  commercial audience. “You see, when we mass entertainers  do  a  formula  film  we tend to go over-the-top to seem  larger-than-life. This  time  in  Ala Vaikunthapurramuloo I decided  to keep my performance on an authentic  level even as I  did  all the things that  commercial cinema demands  of  me.”

About the boardroom jig Arjun had laughed,  “You  liked it?It was an afterthought.We thought  the  boardroom  sequence needed something extra. So why not a medley of old songs for me to dance to?We had a very experienced veteran choreographer  to guide my  steps. When we  were doing it we never  thought of how much it would be  liked. When  I am doing a film I don’t think about how successful it would become.  I don’t put that  kind of  pressure on myself. I’m not thinking now  about  what to do in my next film to be one-up on  Ala Vaikunthapurramuloo. But I  can tell you I’m putting  everything that I  can into my next.”

But here is  the one thing that Arjun would never abandon. “I am  never  going to step off the commercial platform. It is  where  my  dreams were realized and as far I am concerned it is  the  commercial cinema  that  gives  me all the  success and  fans.”

Speaking of  fans does it get too much to handle them? “Not at all . I love their attention. I am what I am because of the fans. They’ve made  me into  the person that I am today.”

Ala Vaikunthapurramuloo has  the incandescent Tabu playing  Arvind’s  mother. How did they manage  the feat?Says Arjun, “It took no great  persuasion. One  phone  call from the director….five minutes  into  the   narration and she was on board. She   knew my director’s work and We needed someone with  great dignity and grace, someone  who doesn’t talk much, but can freeze  you with one glance.  Who but Tabu?”

Arjun also told me  he  has no plans of  heading to Bollywood. “Don’t get me  wrong. Bollywood  is  a  lovely place. I  love the work that’s being done there. A film  like  3 Idiots is truly  inspiring to me. There have been  offers  from Hindi cinema.  But for me  to take  a break from my  busy career  in Telugu cinema it has to be something worth the effort. Maybe some day soon.”

Would Allu Arjun  like it if his  son and daughter showed an interest in  acting? “I’d welcome  it. Right now they’re too young. But when they’re old enough to  choose their own  path and  if they tell me they want to be  actors, I’d extend  all support to them. I come from  a family devoted to cinema. My grandfather  gave his life to the movies. And  my father is  completely devoted to  producing films. For me cinema is life.”

Interestingly Ala Vaikunthapurramuloo  is being remade into into Hindi as Shahzaada with Kartik Aaryan  take over  Allu Arjun’s swag. It’s being  directed  by David Dhawan’s son Rohit Dhawan.