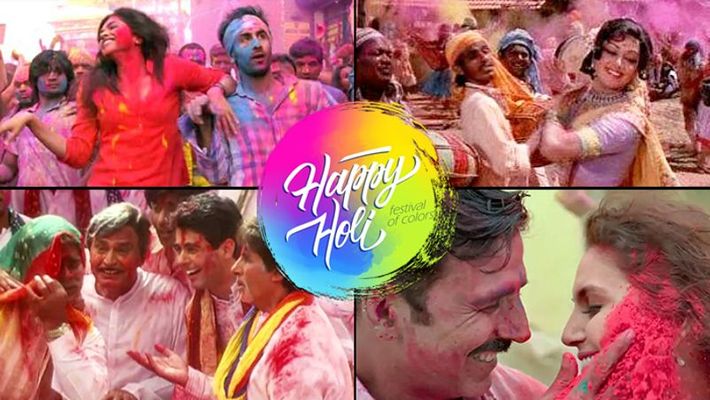 Lata Mangeshkar:  “Holi  is a  festival of colours and a time of peace and harmony. I request  the men  of the country  to  desist from  hooliganism so  that  the women of the  country can also enjoy Holi without looking nervously  over their  shoulders. I  wish thisHoli  all Indians  would unite  to become one strong and powerful nation, so that no  enemy  from the outside would  dream of attacking us. Our film industry  has an amazing history  of secular values. In a Holi song like Mohe panghat pe nandlal cher gayo re. Naushad and Shakeel Badayuni Saab who  composed and wrote the song so beautufullt  were  both Muslims. And Rafi Saab sang  Madhuban mein radhika naache re(in  the  film Kohinoor) a classic  that  is remembered  every Holi. The days of  the big Holi bash  are now over. I attended many of them at Raj Kapoor Saab’s R K Studio. Ab toh na Raj Saab rahe na studioraha. Holi is now  a subdued festival. Abb wohjosh nahin raha.”

Shatrughan Sinha; “I pray for  peace and harmony this Holi. I  pray that better sense  would prevail over the  war-mongerers.And I pray that every Indian resolves this  Holi to vote for  the  parliamentary representatives  who would  voice  the  apprehensions   of  the common man. How  wonderful it would have been if this Holi we  could have celebrated the festival  without the clouds of war hovering over  our  great nation. I was  always very enthusiastic  about  Holi. But nowadays  the  josh is gone in the  film industry. Even the Bachchans don’t celebrate Holi with the same enthusiasm. Holi has now become a  family  affair rather than  community event.”

Dilip Kumar & Saira Banu:  “Ayk dosrey se mohabbat aur bhaichaara ho…our country  has the beauty of all the colours of the rainbow in its people’s togetherness…Hindustan is unique in its people’s love and respect of happy co-existence….may this always prevail…this is our prayer.”

Pooja Bhatt:  “Holi is a time where we need to  reinstate and believe in the virtue of being truthful and honest and fight away evil in all its forms.For me it’s about spreading love in a world plagued with hate.”

Preity Zinta: “As  of now I am just chilling for  Holi. Non-stop travelling has taken the josh  out of me. I just want  to  sleep.”

Rajkummar Rao:  “I’m going to play a bit with my friends and family here in Mumbai but I make sure that I always use safe organic colors only. All I would say is, it’s a festival of love and colors so do celebrate it with lot of love and harmony and be safe.”

Also Read:  Ayushmann Khurrana 5 Times When He Shocked Us

Kriti Sanon: “I don’t have plans as such.. but my parents have come from delhi for Holi. So I’m just hogging on the gujiyas they’ve brought for us!”