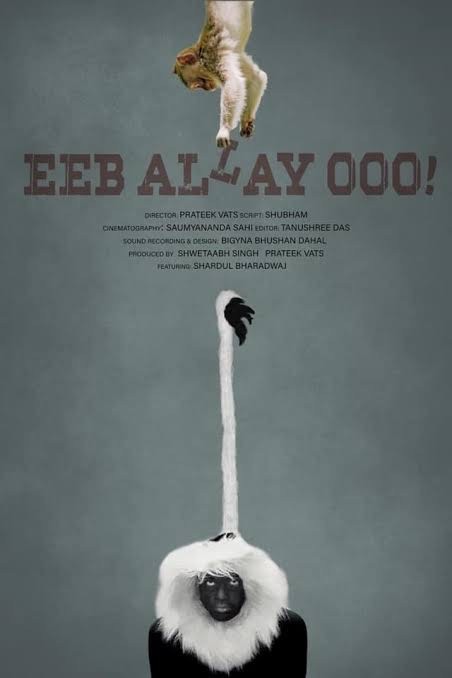 You either have  to be  foolhardy or  audacious  or  both  to attempt something  so unconventional and culturally specific. The very strangely  titled Eeb Allay Ooo is  about the monkey menace  in parts  of  Delhi where Sarkari Babus  dominate  the scene,  and  those wretched  ground-level workers  who are  hired as monkey repellers. Just why anyone  would want to make  a  film on  something so esoteric is  a question for those who examine  adventurous minds.

Clearly director Prateek Vats  belongs to that  rare  breed  of  over-reachers  who  doesn’t mind falling on his  faces while reaching for the stars. And by stars, I don’t mean  the  Khans and  Kapoors. Luckily Eeb Allay Ooosucceeds  in staying float despite its bizarre cultural specificity. It is a slice-of-life  tale  of a reluctant  monkey repeller, played with extraordinary sensitivity and rare understanding of  characterization and  personality-momentum by  Sharadul Bharadwaj who was lately seen  as Ratna Pathak Shah’s autorickshaw companion  in Unpaused.

Bharadwaj belongs  among that rare breed  of actors who   sublimate  their own personalities  and  are so  submerged  in their characters that we  can never  recognize  the  actor when he is  not on the screen. So before I ask the real  Bharadwaj to stand up, shall we pause to consider the   exceptional  realism  in the way Bharadwaj’s Biharimigrant Anjani Prasad’s  character interacts at home(a  seedy airless chawl) and at work where  he  needs to  scare monkeys  away  but ends up  scaring his job away.

It’s  a wretched life. The writing by Shubham is  so immersed  in the  immediacy  of living that  there is no pause to sentimentalize  Anjani’s  desperately poor life.  While the  backdrop of  the  plot is  squarely squalid, there is  never  any room to revel in that squalor.

Eeb Aalay Ooo(the sounds  used to intimidate monkeys) is exceptionally freed of conventional  cinematic  props . The background music is used sparingly,and  the sound design(Bigyna Bhushal Dahal) is such that we  hear  much more than just what is relevant to the scenes. Like much else  in this unassumingly  masterly study  of  lower-income  destitution ,the sound and the cinematography(Saumyananda Sahi)  are  simply there.  You may not notice them the way  you do  the masterly craftsmanship in  other important  films. That’s  only because  nothng is here done for effect. It all flows  like a documentary. The only time you see the  director’s  tight control over  the narrative is when Anjani is with his  best friend and  colleague Mahender.

Anjani’s bond with his pregnant sister (Nutan Sinha) and his  bestie are  tenderly drawn into the hustlebustle of  a town that cares  for none but accepts  all. There is a dramatic  incident towards  the end  that changes the mood from workaday  to surreal. Don’t let that shake  you up. Eeb Allay Ooo doesn’t mean to startle. It just wants  to  remind us gently but persuasively  of those who  exist  outside our range  of vision. The monkey pacifiers are  far more clever  and cautious than those  employing them.Their time will come.Until  then there is this film.