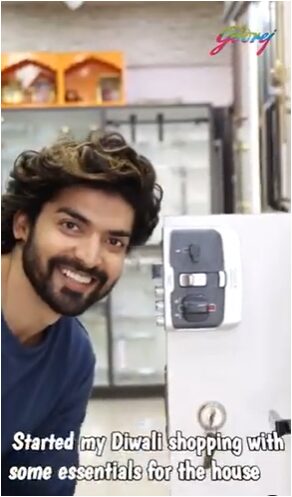 Here’s an interesting note on Gurmeet Chaudhary’s latest updates. He was recently seen doing Diwali shopping in the city. Last weekend, we saw our favorite actor grooving to a new dance challenge on his Instagram handle!

Television actor Gurmeet Choudhary was spotted in the city prepping for Diwali shopping. Looks like the actor is gearing up to host a Diwali bash for his loved ones in his newly renovated house, as he was seen purchasing products to upgrade his home this festive season.

Check out how Gurmeet Choudhary is grooving to this new dance challenge!

Actor Gurmeet Choudhary and his love for dancing knows no bounds. He is a fabulous dancer who loves to share his extraordinary dance moves with his fans. This weekend, he took to Instagram to share a video of himself, where he’s seen doing the ‘Cash Dance’. You can see him performing a happy dance rejoicing exciting cashback offers from Godrej Locks, as he kick-starts his Diwali celebrations. Gurmeet’s fans too were quick to get hooked to his ‘Cash Dance’ and shared their takes on his dance.

The actor is known to give his all in every performance that he takes up. He rose to national fame for winning the fifth season of the dance reality show Jhalak Dikhla Jaa with choreographer Shampa Sonthalia. He also appeared in Nach Baliye season 6 once again with his wife Debina and was the runner up of that season.

Gurmeet is well known for his performances in television shows. He made his acting debut in the 2008 television show Ramayan as Ram, opposite Debina Bonnerjee who played the role of Sita.

Related Topics:Gurmeet Choudhary
Up Next