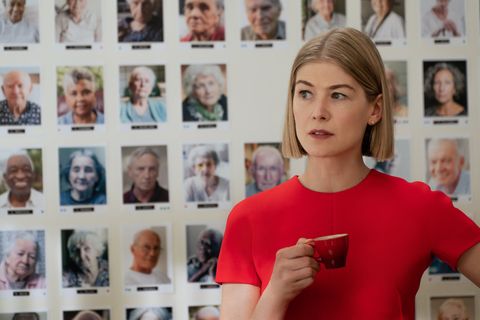 The first-half of this insanely  wicked  stroll down  Greed Street is  so frigging entertaining, I  was  hooked, lined  and  sinkered…whatever that means!  Welcome to the world  of  pure-white red-hot  avarice. There in that  razor-sharp haircut is Marla Grayson, played by  one  of  the most accomplished contemporary American  actresses Rosemund Pike.

What  does Marla do? Well,she  is a  professional certifiable  scamster .Along with  her business and  life partner Fran(Eiza González)  Marla  siphons  off the property and wealth of  the elderly, declares then  unfit for  unassisted  living , has them locked away at an old-age  facility. It is the kind of  horrific subterfuge  I’d expect  in a  third-world  country:   unscrupulous  , unfettered by any  intervention   of  guilt or conscience. Marla  has as her accomplice the entire administration from doctors and  nurses  to lawyers  and  judges.

But then  Marla does what all over-smart  crooks do. She  over-reaches.  She pulls  her scam  on Jennifer Peterson(Diane Wiest) whose son Roman Lunyov(Peter Dinklale)  turn out to  be a Russin mobster.So far  this film is   sparkling illustration of  perfect writing  direction and  performances.

There is an  exceptional sequence  in Marla’s  office where  a lawyer(brilliantly  played by  Chris Messina)   tries to bribe  Marla  out  of the  crisis that she has  got  herself into: free Jennifer Peterson and walk away  with a  hefty  sum of money.The  lawyer offers  coolly.

Marla  refuses the  offer. This is   where  the screenplay begins to flounder. The screenplay grows as outlandish as  Marla’s cocky scamming. The  cat-and-mouse game between Marla  and  Roman is  just not convincing or even amusing. And  that  remarkably stupid judge in  the courtroom  who  repeatedly keeps falling into Marla’s hands , belongs  in a sitcom on  legal  drop-outs.

It just grows exponentially absurd and violent  until  we reach the utterly  preposterous  climax which seems  to have  been  written with  almost suicidal absurdity.Have   I seen a more entertaining  first-half seriously damaged by  a  severely compromised second-half? No I haven’t.Is  the  film still worth your while? Yes, it is.  There is  so much going for  it. Rosemund Pike’s  brazenly immortal  character and the actress’ complete belief  in  her character’s immorality.

And Diane Wiest makes a formidable adversary. I wish there was more confrontational scenes between  these two brilliant actresses. There is  so much more that  this massively entertaining  thriller  could have  given us. What remains is nonetheless  quite something.