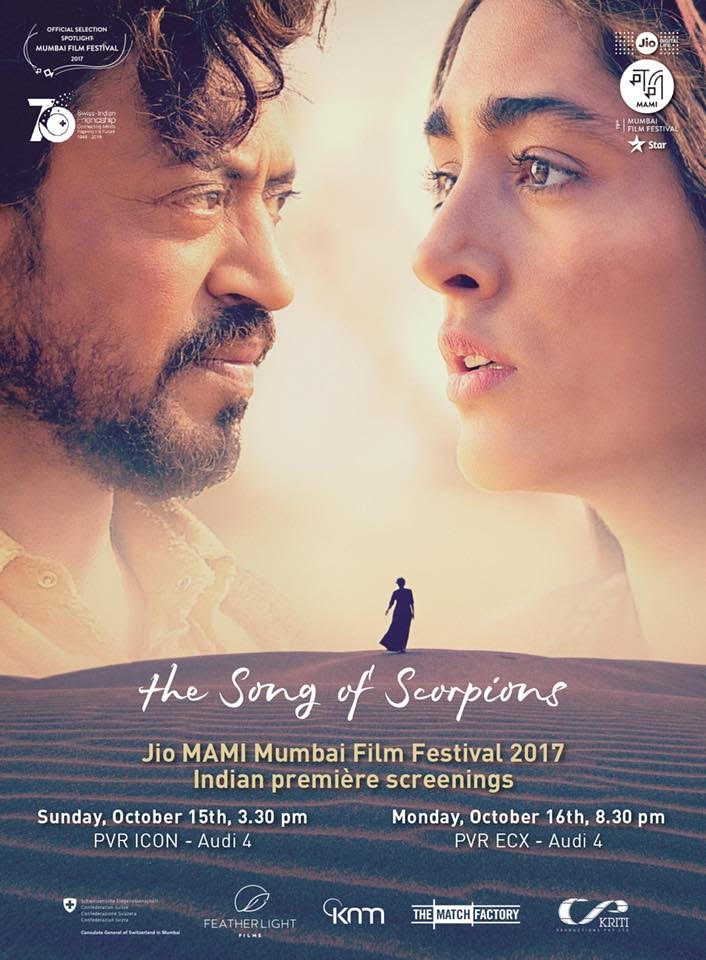 The  Song Of Scorpions

Luckily  for us  and posterity , Irrfan Khan’s  final film is  an exquisite  piece of cinema. Enchanting to view,gorgeous in feel, The Song Of Scorpions is an enigmatic  parable set to the tune of a cinematic rhythm by a  master craftsman.

I’ve been  a  fan  of  Anup Singh’s  cinema since Qissa where  Irrfan was a Sikh father hellbent on proving his daughter to be a son. In many ways  in The  Song Of Scorpions Irrfan plays a distant cousin to his  character in Qissa. His camel-plying  hero Aadam is a mulishly stubborn man driven  to obsessive self-destructive lengths by his passion for  a stunning  resolute woman of  the deserts(Iranian beauty  Golshifteh Farahani) who sings to  scorpions .And there lies the sting.

This  is a  film that addresses the  position of power  of a self-independent  woman in a dominantly patriarchal  rural  setting, and how such  awoman who is “too big for her boots” is cut down to size by  masculine autocracy.

Nooran roams the deserts  with the  confident strides  of a faith healer until one  night her faith is shaken. She comes home a broken woman and  gives  in to the offer of  marriage with Aadam  who loves her  in a twisted  terrifying way that finally tears into Nooran’s womb , rendering her  revenge into a  kind of  nebulous feminist statement that will leave viewers stirred shaken and  in a strange way healed and whole even as  the narrative opens  up wounds that have no cure.

This is  an  elegiac film haunted by long-suppresed demons of  discrimination and  masculine privilege. Golshifteh Farahani  stands gracefully tall in the morass of intimidating masculinity. But  I  thought she was somewhat  out of place in  the Jaisalmer deserts. A  bit like  a swan  swooping down into a cavalcade of  crows. The stately Waheeda Rehman, on the other and,just blends into the  desertscape.This is  not the  first time  that the actress has visited the sand dunes. Who has  forgotten her in Reshma  Aur Shera?Alas  Ms Rahman’s role  ends abruptly,as  it is meant to, though her spirit haunts the film till the end, and beyond.

There is  more than  a hint of attraction between  Irrfan and his  sidekick-buddy Shashank Arora. Even when they  visit brothels  together(where Arora goes  berserk while  Khan remains chastely aloof) they are more interested in  one another than the  bounty  of beauties beyond.

Irrfan , in one of his career’s best  , owns his  role as only he could. His stormy passion for Nooran is almost religious in  its commitment. In one  sequence after Nooran gets  up from bed,  Irrfan  sniffs her pillow to get a whiff of  of the woman whom he won’t touch until she  says so. It’s a  complex  screwed-up character, whose complexities are  dismantled broken down and deconstructed  by  an  actor who never  “played” characters. He owned them.

The Song Of Scorpions is sumptuous  in mood . The cinematographers (Pietro Zuercher,Carlotta Holy-Steinemann) capture the deserts in all their glory.But somewhere secreted in these sprawling stretches is  the tragedy   of a human heart  that beats  only for one love. This is  not a love story.  It is  the story  of a love  that falls into an abyss.