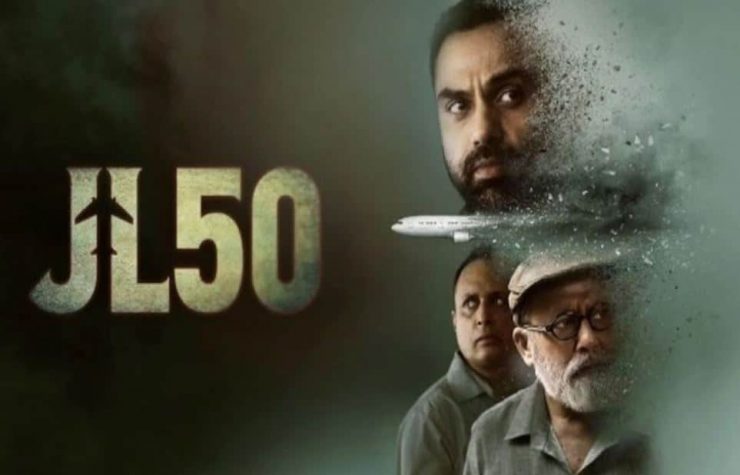 I confess I  didn’t follow the  complex  plot  of Christopher Nolan’s Tenet. I suspect neither did  Nolan’s cast and  crew. I  don’t know if  the  cast and crew of JL50 followed the plot. I didn’t. This makes director  Avinash Vyas the desi Nolan.

Does that make any sense to you? No? then  try this:  a plane disappears   in 1984  and  shows  up   35 years  later with  only three  survivors,one of them being Pankaj Kapur. I am glad he survived the plane crash. I am not sure he will be able to survive  the  crash  of  this  half-baked fully-pakao  series.

There are  so many gaping loopholes  in  JL50 that after  the first  episode I stopped  counting.   All I could gather  with some certainty  is that  along with air travel this is  a  series about time travel, a  kind of two-in-one pleasure trip for  passengers that  turns into  a nightmare  for all concerned.

Abhay Deol is a stone-faced CBI  officer investigating the  crash and the  plane’s  miraculous resurrection. His stoic expression doesn’t give anything away. I  don’t blame him. If I were put in such a seriously sticky situation I’d be  just as miserly with my feelings.

In the final Episode 4   Abhay has a meltdown scene where   he encounters  himself as a  baby in the cradle in Kolkata(request: please  don’t give ask about how this happens, after Tenet  and  now this,my  explanatory faculties have  gone numb)  .Here too we don’t see  any emotions being  wasted by  Mr Deol, as  he has his  face  hidden under his hands, a  la  Manoj Kumar.

In a large  chunk  of  Episode 3 Abhay sat listening to  Pankaj Kapur mouth the  kind of scientific mumbojumbo that Kenneth Branagh  in Tenet  is  heard mouthing. Branagh has  finally met his match.  In  the  last episode we  move  to  1984 with  Kaaton se kheench key yeh aanchal(Guide, 1964)  playing in  a car to create  the  aura of periodicity,  and  a poster  of Badle  Ki Aag  which came in  1982, on the wall.

Director Raj Kumar Kohli  would be happy to know that his flop film  was showing in Kolkata for two years.And veteran actress Sarika would  be delighted to know  that actress Ritika Anand who plays a zonked-out airhostess is  her  spitting image. As  for you, dear viewer, you would be happy to know the series  is blessedly brief, and you can walk away any time.