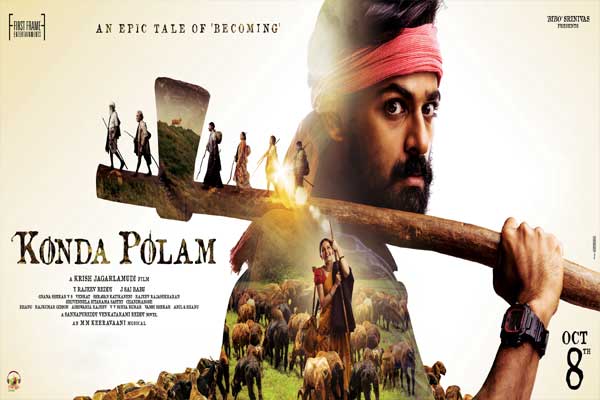 Konda Polam Review: There is  something seriously  amiss in  Man’s ageless  relationship with Nature. The  recent pandemic is  more proof of eco-imbalances  that have  brought civilization to  the brink of disaster.

Seen in this  context of  a rapidly self-destructive civilization .  the  astoundingly  versatile  Krish Jagarlamudi’s  new  venture  Konda Polam is  of  immense  importance. It addresses the  uneasy relationship between Man and  Nature  without tripping over  its own self-righteousness.

Selfrighteous,  it sure is. But not at the cost of  making  the  narrative excessively  preachy.  The wide panoramic view  of  the  forest area as  shot by  the  amazing cinematographer  Gmana Shekar VS, and the  evocative   songs and background music by  M M Keeravani go a  long way  in imbuing a magnetic energy to the narrative.

In terms  of  the  ecologically relevant  issues that the  powerful plot , based on  a celebrated  novel  by  Sannapureddy Venkata Rami Reddy, raises  , this film is a rare  achievement. How many Indian films in recent (or for that  matter  remote)  times have been shot in the thick forests barring the tacky Sherni(where  the only  animal that needed taming was  the  director’s unruly vision).

Krish’s  captivating fabulous fable ventures  into the deepest parts  of  the  Nallamala forests. The camera  knows the area  well. This film doesn’t forget lose its way in the wilderness.  Krish has always been  a focussed storyteller. His characters never get lost in the  impressive landscape that they inhabit.

If  Konda Polam is  a visual and emotional feast, it is because  the  story doesn’t slip off  from edges. The centre holds even when an  anarchic array  of  character-based episodes is let loose.

Even as  Vaisshnav Tej occupies centrestage  as  a young man torn between his traditional  heritage  and  worldly  ambitions,the director has maintained the novel’s vast  gallery of  nomadic characters. Some of the shepherds  who flock into the plot  seem  redundant. I did  feel that  the  film could have worked even better with less incidental characters and a more tightly edited  narration. However  , the  pace though  not neat , never lacks grace.  The CGs where  Tej’s  Ravindra Yadav  faces the wrath of  a raging  tiger, roar with energy and verve.

This is  one of the most accomplished Man versus  Nature  films I’ve seen  with  a stand-out performance  by Vaisshnav Tej.After seeing him in Uppena  I suspected  that this is an actor whose eyes speak louder than words. Now I am sure.

Among the other actors  Sai Chand as Vaisshnav’s father and Ravi Prakash(pleading with his wife on the  public to not leave him as he disappears  into the mountains with his  goats) are deeply effective. Rakul Preet Singh’s role and performance would have worked better if she had avoided the  groomed look. Have you ever seen  a shepherdess  with long manicured nails?

Not that I’ve seen too  many(groomed  or otherwise). Konda Polam takes us  into places that we tend not to visit.  It  reminds us of a people and a civilization that  politicians  and bureaucrats  either exploit or  ignore. Never  nurture. This  film does that  beautifully

Konda polam is a nice concept based movie where the film not running on any particular story. A BTech computer science graduate student(Hero) always fails to get a job due to lack of technical and communication skills. After 4 long years of job trails he returns to his …

It is a good sign that novel story pictured in Konda polam movie. First half is good. Second half director did not show how he achieved his goals successfully. We should not compare with uppena, because uppena is having more commercial elements . It might not crowd …