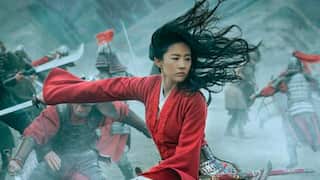 ·       Mulan , no relation to  our own timeless tale  of  reincarnation  Milan, is  a story that had to be  told. It is inspiring and  edifying, filled with troves and  peaks that live up to  every definition  of  a tradition fable.

·        Director Niki Caro  fuels the fable with fabulous images  of war and  more personal battles that a  girl in Imperial China fights  with a  might that is traditionally associated with men.

·       Many parts  of  this wonderfully unalloyed  saga of  a plucky female warrior who dreams to  fly,  played out  like  our own Gunjan Saxena,  with the male soldiers sniggering at Mulan who  masquerades as  a  male to find a sense  of belonging in  the imperial  army.

·       There are  moments of  unstoppable  beauty in the  bond that the  exquisite camerawork(Mandy Walker, who  shot  a similar Man against Nature equation in  The Mountain Between  Us) establishes between the imposing mountains  and  the beautiful young Mulan’s  passion for  swordsmanship(or should that read swordswomanship).

·       This  is  poetry,  though not  of the  premptory  kind.While travelling through  a crackling story of war, love, betrayal and triumph, Mulan  also  ploughs through gender stereotypes, making Mulan not only an equal to her male colleagues in  the army , but even better.

·        There is  also  a message  on ascendancy  of  the male heir where Mulan’s father declares if he  could do it again he  would still  want two daughters  in his life.A moment robbed of its  rabble-rousing  value  by  the Covid home detention.

·        Yifei Liu  and  Tzi Ma who play  Mulan and her father reminded me  of  Janhvi Kapoor and  Pankaj Tripathy   in Gunjan Saxena. But I am   digressing.Mulan is a spectacular achievement on every level. It  opens  up vistas  which are  meant to  inspire awe  in  the audience,and they do.

·        The  characters brim over with  a cultural pride that    many outside  China  would  find  odious at  a time when the country is held responsible  for the biggest disaster   of modern times.

·       What stays with  you after watching Mulan  is   that sense  of epic  buoyancy , fastened to  strong family values. The  action scenes have a choreographic  depth . Yifei Liu  in the  title role is luminous.Gong Li as  the witch has the other powerful female  role in a film reeking of masculinity but  serenading  muliebrity  in the most endearing way  possible.

·       Watch out for the legendary martial arts  hero Jet Li as  the Emperor  Of China. For the climax he is tied to a bamboo scaffold urging the young female hero to do the right thing for country and family.