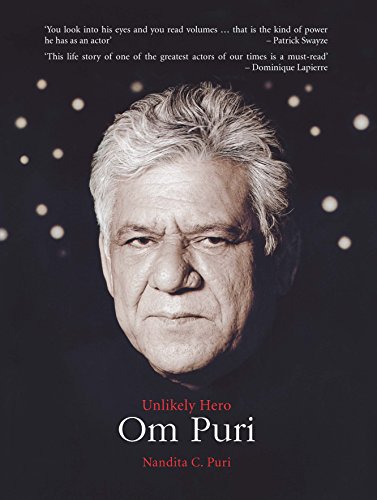 When Om , or Omji as I  insisted on calling him, came home with his friend and companion Seema Kapoor he was not feeling well.

Excessive smoking had killed his taste buds. He couldn’t savour any of the  food we served him for lunch. At the end of the two hours Om promised he would take better care of his health.

He never did. Just recently he was in hospital with a cancer scare, and again he promised to stop smoking and  cut down on his drinking.

But unhappy people need an outlet, some kind of numbing comfort for their soul, even artistes as steeped in brilliance as Om.

On hearing of his sudden death I relived Om’s most glorious performances. The implosive anger he projected in his best parts in Govind Nihalani’s Aakrosh ,Ardh Satya , Droh Kaal and Shyam Benegal’s Arohan, Susaman,was squandered  in the comedies he insisted on doing with Priyadarshan and David Dhawan.

With Om I could be as critical  as I wished about his work. He would never take my comments amiss.  Normally when actors ask for an honest opinion they don’t mean it. Om did. Each time  I would see him in some frightful corny kitschy cringe-worthy potboiler with his belly hanging down to his knees I would remind him he was the actor from My Son The Fanatic and The Mystic Masseur(the latter a loving delightful  adaptation of V S Naipaul’s novel   and one of Om’s unsung gems).

He would remind me  of his financial responsibilities. “I’ve a  son. He needs careful nurturing.   I can’t  just sit back and relax. My colleague  Naseer’s  children  are grown up.  His   responsibilities are  over. And   besides  he  has  earned a   lot  more than me.  I’ve been paid peanuts  for my efforts. I was paid a mere 7 lakh rupees  for  playing one  of  the central characters  and working four months  non-stop  in  Raj Kumar Santoshi’s China Gate.  I’m sure Naseer  must’ve got   five  times more money  for  the same  film. Surely big filmmakers  like Santoshi Saab should  be  more cautious  of my worth. But I’ve  no complaints. I may return  to  theatre, or  do a  small but meaningful film that gives me  satisfaction as an  actor.”

Om was exhausted of hid own prolific output and deeply embittered by his professional and personal conflicts.

In one  of our most recent conversations he said to me, “Enough  is  enough. I’ve slogged for  thirty years. I’ve accumulated a decent bank  balance though  it may  not  be decent by Bollywood  standards. I’ve  done roles for fun and for job satisfaction. Now I need to take it easy.  I keep turning   down offers. I need a break.”

The  break has come so suddenly and unexpectedly. Friends like Naseeruddin Shah and Shabana Azmi are in a state of shock. The two actors together with Om formed the titanic triumvirate of non-mainstream actors who changed the way we look at cinema. While Naseer and Shabana have  come to terms with their lack of fluency with commercial cinema, Om till the end remained torn between the two extremities represented by ShyamBenegal and David Dhawan.

The meager remuneration   as compared with actors much less skilled who were stars, bothered Om.

“I am being used  like a potato in every dish—be it a comedy, thriller or a love story. The bloody bhindi costs Rs  60 per KG. But the price of potato remains unchanged. I have to make my family and I financially secure. To a large extent I’m already  on the way to doing that. If  today I decide to migrate to a small town , I don’t have to worry about my income. But  I want a little more from my career. I do have certain ideas for  films swimming in my head. Sometimes I feel being part of an escapist entertainer is just fine. At other times I feel like addressing myself to issues that bother me.”

He was  an  restless unhappy man who couldn’t lie to himself, trying till the end to find a peaceful ground in his personal life. The rage that imploded  in his best performances often  manifested in  foot-in-the-mouth declarations on public platforms, like the  one recently about our soldiers . Om repeatedly got into trouble with his unthinking sound bytes. He  took the backlash on his chin like  a man. But he wasn’t prepared for this one final blow that date dealt his life on  Thursday  morning.

I will miss your gravelly voice on the phone as you  spoke out on your personal and professional lives. In  spite of my  cleaning up some of the Puri pronouncements when it was published invariably got the actor into trouble. But he never denied his quotes, never said he was misquoted. Om owned up to his mistakes. That’s what made his performances so authentic. He never lied to the camera.He never lied to himself.