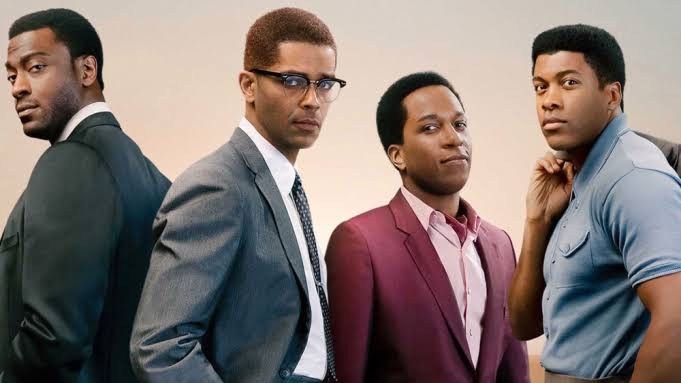 One  Night In Miami(Amazon Prime)

Regina King’s audacious takeoff  into the  unpredictable what-if zone  of  four  most prominent black American icons meeting in  a motel room in 1965, is  surprisingly  vivacious in tone and compelling in execution ,  in spite of being restricted to one room where  Cassius Clay(Mohammed Ali), Sam Cooke(Leslie  Odom Jr), Jim Brown(Aldis Hodge) and Malcolm X(Kingley Ben-Adir)  come together to discuss how their collective and individual power can help the Black community.

It is a daring premise and one that first-time director Regina  King carries off with ease fluency and aplomb. The actress turned director is particularly adept at using limited spaces  to convey a sweaty tension, as  four behemoths,  living legends  in their own right, try to find a voice  beyond the one that the colour of their skin allows them.

There is a natty correctness  in the way the four actors  dress talk and  address the  problems of their  community. These are men  who have risen  above the ranks  of their persecuted race  to become more white than the  mainstream  would  allow. These are  men with clout in  a community  trying to find their  voice. By showing them sharing a fictional evening  together, Ms King draws attention  to the power of solidarity  sadly lacking in all the  movements  for equality that we have witnessed in our country.

Since  the  film is  based on  a well-known stage play, the screenplay favours  a  kind of  voluble visual vigour peculiar to the stage. And yet the film goes beyond the play. My favourite sequence in the film  is  the one where  Jim Brown visits  a racist(Beau Bridges in a scene-stealing cameo ) who  won’t allow him  in the house after serving him lemonade and treating him as a  chum.

Bigotry, says  this thought provoking film, takes many shapes and none can be said to be  better or worse. Also, a salient thematic thrust in this crisply edited vividly shot period piece is, the responsibility  towards  one’s community  if you have made  it big.Whether you  are a Black leader of  a Dalit politician, you are obligated to carry your persecuted  community  on your shoulder.

One Night In Miami has many moments  of ruminative cinema . The  four principal actors are all  so into their parts I saw only Ali,Cooke,Brown and  Malcolm on the screen. But if you insist on picking one,I would say Kingsley Ben-Adir as Malcolm X is  better than his co-stars. As a Black Muslim his character  has more responsibility  to bear than his  colleagues.The actor seems  up to it. And that’s  the beginning  of  the battle won.