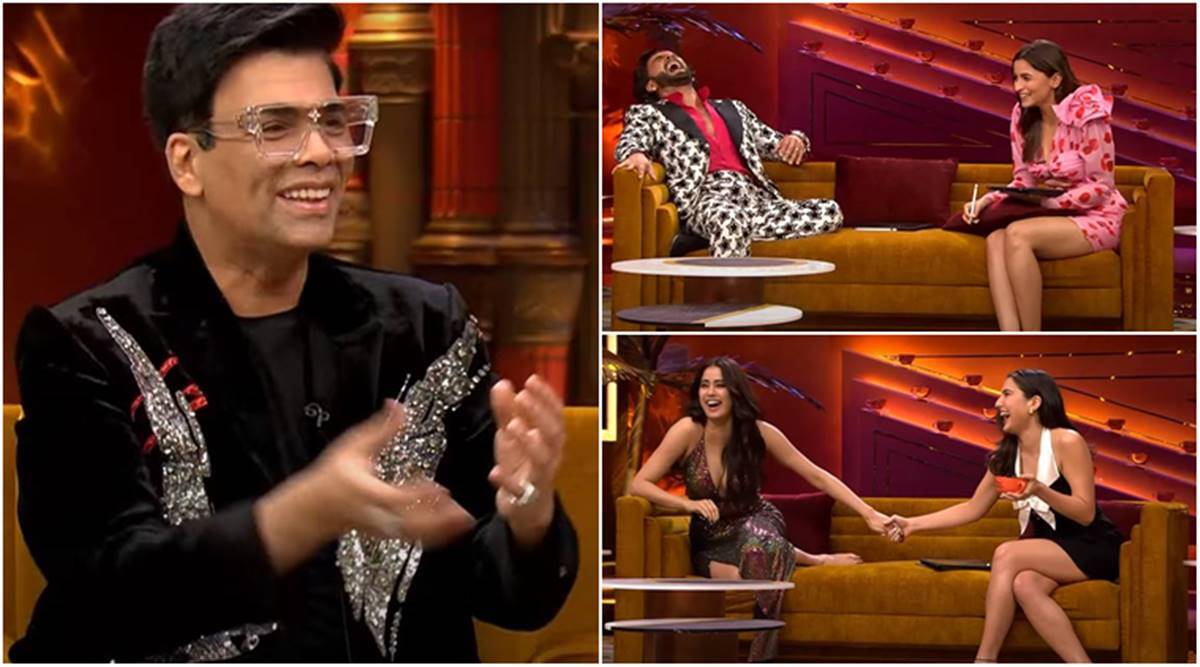 I didn’t know the  ebullient Ranveer Singh and Alia Bhatt were  ‘sakhis’(female friends) until he told us so on the inaugural episode  of  the  new season of Koffee With Karan. It was  a great deal  of fun, thanks to Ranveer.

Within the span of  the  first twenty minutes he told us   he was  best friends with Alia , that was wearing his mother’s diamond ear-rings  that he lost Anurag Kashyap’s  Bombay Velvet to Ranbir Kapoor  because  at that time Ranveer  did not have the stardom to carry off the  budget of  the  film.

Unfiltered and sexually  charged,  Ranveer was without  doubt the life and breadth  of the show. The consummate livewire. Alia was surprisingly  lackluster, as  if the newly-married actress had other  things on her mind.She was of course no less than  charming as she  spoke  about what it feels like to be  part of  the Kapoor family where family get-togethers are a  big thing.

Alia joined Ranveer  Singh to praise  Sanjay Bhansali. He  congratulates her for being lately ‘Bhansali-fied’. There was this interesting recollection of  the time when Alia was shooting a tough  dance  for Bhansali when Ranveer dropped in for moral support.

But the best was  yet to come. Ranveer’s impersonation  of Hrithik Roshan, Varun Dhawan , Aamir Khan and Ajay Devgan  was  so bang-on it was the most entertaining thing I’ve seen on television  for a long time.

Also Read:  Hrithik Will Do Brahmastra Only Under One Condition

While the  kickstart episode was  kickass, what could have been  avoided was   the preliminary  prattle  on  Bollywood  being vilified during the  last two years(“I didn’t know  if I would  ever  come back  with this show”).The subsequent interlude where  Alia Bhatt shared a  message  of appreciation  from Ibrahim Ali Khan  after he  watched her in Gangubai  Kathiawadi  could also have been avoided. Considering  it  was  a personal message I thought that  was unexpectedly unkind.

That apart  the show  eschewed overt bitchiness. Karan stuck to generating humour  from his own quirkiness rather than hitting out at his adversaries or poking fun at the rest   of the industry.

There was an awkward  innuendo  on a certain part  of Ranbir Kapoor anatomy where I could see Alia squirm.She should  know  Karan  Johar wouldn’t be  Karan Johar if he didn’t  shock you.

Back To A 8-Week Window Between Theatre & OTT Release?