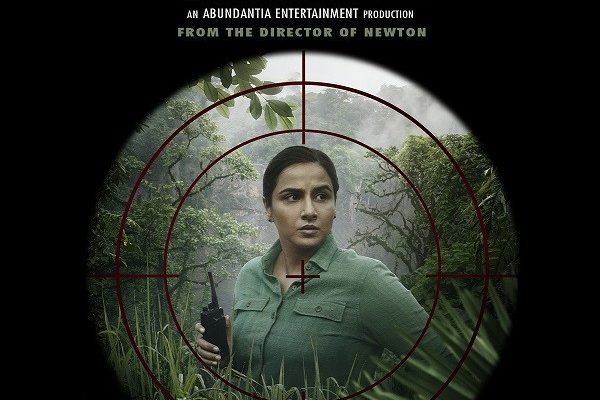 Sherni  is  all about  a man-eating tigress, a  gender-defying female forest  officer who  as Mrs Gandhi was once famously  described is  the  only man in  the  organization,   and a man-baiting  plot that  makes almost all the male  characters, including the forest office Vidya Vincent’s poor husband(Mohit Chaddha) look like corrupt wimps.

You must have noticed the female hero is named  after the film’s leading  lady . Says a  lot about Vidya Balan’s star power  that she  is given not  only the title role(with due apologies  to the man-eating tigress) but she’s also  the only incorruptible individual in  a  forest  filled with wild animals  and wilder  human beings.

Everything here is  greed/need-based. Even the animals  are not real. An  announcement  in  the opening credits tells us  they are computer-generated, a ‘living’ irony in this humane drama  about nature  conservation.Sherni  makes  all the  correct moves. The plot is populated with  a bracing  mix of  tried-and-tested actors who always  do their  jobs  well , and the  local actors , like  Sampa Madal  as  the  firebrand activist Jyoti,  from Madhya Pradesh who give to  the  forests an authentic  flavor.

Sadly the flavor grows too pungent as  the  plot progresses, and we are left looking at  a film   with admirable  lofty  ideals  but little control on the pace  and narrative rhythm. The  storytelling  moves at a tired trot. Once we  get  the point  about a man-eating tigress on  the prowl  who must be pacified  without  upsetting the convervationists , we get very little  feel of Vidya’s innerlife. Most  of the  time she wears  a uniformly dour look as if she can smell the burning milk  in  the kitchen.

As an actor Balan comes to fiery life  in the sequence where towards  the end,she walks up to her corrupt senior(Neeraj Kabi,a fine actor in an awkwardly written role) and calls him a  pathetic coward.

We  get the  point about Vidya being  superior   to her colleagues and associates. But must she always  act so uppity? There is a  hilarious scene  where Bijendra Kala, playing Vidya’s senior, recites  Urdu poetry to his  staffers including an academician and environmentalist(Vijay Raaz, superb) who  corrects him. It’s  a funny moment in  a dreary office meant to lighten the load. Vidya  sits  through it with a  gawd-what-am-I doing-here look.

The  storytelling is as  starchy and stern as  its leading lady. The  forests look surprisingly listless.

Rakesh Haridas’  cinematography   comes alive in flashes, as in the  night-time  sequence where two local politicians  clash  after  the tigress claims  another victim. The  writing is  uneven and  the editing jerky at times. To cite an  example, Vidya meets her senior  Nangia(Neeraj Kabi) at a  get-together after a long time .They catch  up. Just  a few minutes later she attends a meeting  presided by Nangia where they meet as though a  long time had elapsed.

Elsewhere  the  narrative rushes  through the  events as if in  a  hurry to  get somewhere, though I am not  sure where. I would have liked to  know  more about Vidya’s  relationship with her  absentee husband. When he  comes visiting in  the forest with  his mother(Ila Arun)  and his  mother-in-law(Suma Mukundan) there is  just  a bit  of the domestic drama(a mosquito net  falling  noisily in  the  middle  of the night on  the couple had Ila Arun  moaning, “Enjoy enjoy!” from off-camera) after which it’s back  to  the  forest range in a film with plenty of forest  but no range.Which is really strange considering the  fine talent involved.

Vidya  Balan and  Vijay Raaz are on top  of the game.Sharat Saxena as a local unauthorized  hunter  introducing himself as   a ‘paideyashi  conservationist’  is  a hoot. In one sequence  he gets together with his  political and  bureaucratic friends  for a campfire  party where they all make  noises like animals.

I can just imagine what  Vidya’s response to that  would have been were she also invited.  But my favourite performance is  by Vidya’s cat Tuffy who simply ‘meows’  down all the competition. As  for  director Amit Masur, two back-to-back  films set  in the forests, Newton and now Sherni.We get the point  about  tribal  concerns  for  ecological imbalance. Could we  move on?

Sherni is  too propagandist , preachy , polemical and  plodding to make its desired impact.