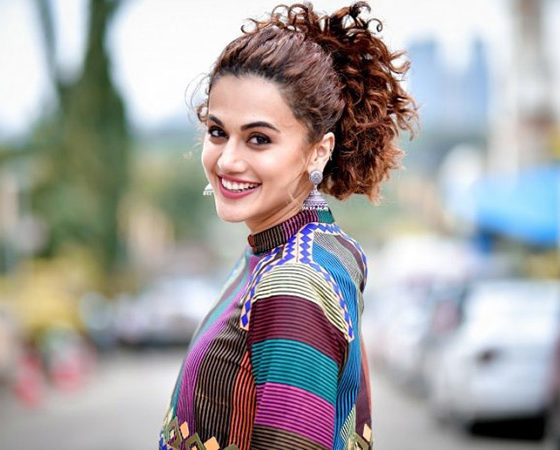 Actor Taapsee Pannu has played real-life athletes  in the  past in Sandh Ki Aankh and Rashmi Rocket, is  back again on the field, this time to  play the Indian women’s  cricket team’s first captain Mithali Raj. Is Taapsee excited about  serenading the sporting spirit one  more time? She tells Firstpost.

In Shabaash Mithu you play yet another real life character.How different was this experience as compared with other biopics?

See , I feel biopics are  normally about  an individual’s life-journey.  It is  usually an underdog story or a rags-to-riches-to-rags-to-riches story. But here, Mithali  didn’t really go through any  real-life  struggle.

(laughs) No drama as such. It wasn’t as  though she had to struggle to get to her goal. Her parents didn’t oppose her aspirations . She  had no  financial  hardships, and all of that.This is more about people’s perception of the sport.

You mean, why is cricket considered a men’s game  in this day and age when Ranveer Singh proudly declares he wears his  mother’s ear rings?

Mithali’s  journey was  a struggle to give women’s cricket the place  it rightfully deserves in India. I guess that makes  this biopic very different from other biopics. This is  actually her team’s journey as seen through Mithali’s eyes. Mithali has seen women’s cricket come  a long way, from anonymity to the mainstream.  Since she had had a long career  of 23  years   as a cricketer, she is  just the right  person to tell the story of women’s cricket in India.

Did you have to learn to play cricket from scratch?

Yes. I  learnt to  play cricket from scratch.I didn’t even  how to hold  a  bat. I had to literally start from Ground zero , from the basics.It was  tough to  portray Mithali  because she is a  very different personality  from me.She is far more subdued  and  quiet.Hence  it was challenging playing Mithali not just on the field  but also off the field. I  had to learn not only to play cricket but also  to play Mithali.

How well did you get to know Mithali Raj during the making of the film?

I did a  lot of research on her. I read up her interviews  to know how she thought, what she likes, what  hurts and bothers her, what makes her happy….Plus, we had a  close associate  of Mithali, Nooshin with me who is a  very dear friend of Mithali. Nooshin not only coached me but also took me through  the changes in Mithali’s life and sport. The third-person perspective  really helped to understand Mithali.

Did you get to  interact  with Mithali during the  shooting?

Not much . She was actively playing matches during that time. So she was either in a bio-bubble  before  a tournament ,or prepping up in a camp  for the World Cup. Because of all this, she  was  not all that accessible to me to know her one-on-one. But  how much time  is needed to know  a person  well? Of course  if I know a person for years  it would be easier to portray her on screen.

Why do you think cricket by and large remains a men’s sport?

I guess because it has more visibility  more spectators more takers. If you ask me, it’s a vicious circle.As Mithali says,we should  never compare women’s cricket with men’s.It’s not as if women cricketers can’t hit sixers.  But  for some reason, it is believed that women’s cricket is  not  exciting enough. And  that’s really  a myth.I have followed women’s cricket during the last couple of years. They are high-scoring matches. For years and years men’s cricket has got all the attention, hence more  takers  and sponsors. The  men players also get attention and opportunities whereas women’s cricket is almost a child  of a lesser God.As  a cricket-loving nation, we  have  a responsibility to nurture women’s cricket. Hopefully, our film will change some of that prejudice.

Once again you are shouldering the entire film.Hasn’t your shoulder begun to hurt by now?

I was wondering why I  was getting so much shoulder-pain lately. No seriously, these  are the  kind of films I get. It’s not as  if I get offers that require me to be in the shadows.Fortunately  or unfortunately those roles  don’t come to me. This is  the path I’ve chosen for my career. Both the success and failure are mine.  Yeah ,it is quite a  stress to shoulder  films. But then it’s  a price you pay for taking the  lead. There’s a flip side to every situation, no matter how ideal.

Films are flopping left right and centre.Does that worry you?

The boxoffice  has always been a gamble.Films have been  flopping since time-imemmorial. Even decades back when the  VHS came people said movie theatres  are  doomed.Then Blue Ray, then satellite channels….  Now the threat is the OTT. The ratio of  hits and flops has always been the same. People  are scrutinizing the numbers  more now. As far as revenue-recovery goes, I say it’s  not the films it’s the budgets that fail.

What are your forthcoming  projects? Are you considering any webseries?

As of now, no webseries for me.It’s not as if I am against it. But I don’t want to do a feature film stretched  into a webseries. If and when I do a webseries  , it will have to be  a proper  one.After Shabaash Mithu  I have Dobaara on August 19 then Blurr and WohLadki Hai Kahan. Then next year I’ve Raju Hirani’s Dunki. There are  a couple of other projects in the pipeline.

The Magic Of Rajamouli & Baahubali