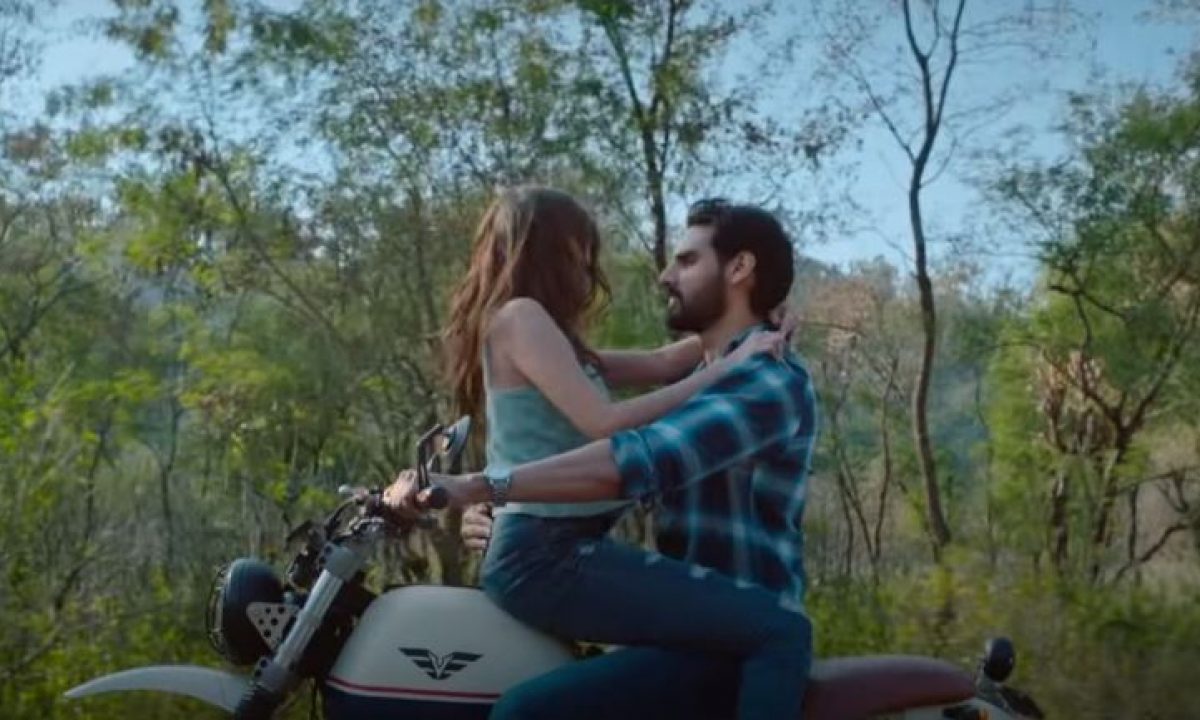 When the moment of  wreck-oning arrives  for our  new action hero, the double-faced heroine, now standing exposed(in more than one)  is shown puffing on  a cancer stick(a.k.a cigarette).

This  is  how much Hindi mainstream cinema  has  evolved:  bad girls smoke. I guess that’s what makes Tara Sutaria  smoking-hot in a film that smoulders and simmers  in  its own steaming juices and finally collapses in  an  exhausted heap of muddled morality.

But don’t say  you were  not warned. When  Tara’s Ramisa   first sees Ahan’s Inshaana dancing  the camera  follows her eyes to his pelvis region. No  selfrespecting heroine’s  gaze fall so slow.

Initially  Tadap is designed as  purely a  star-vehicle  for its debutante hero . Ahan Shetty  walks towards  the camera  in slo-mo shots, balances  himself on his  beloved  mo’bike, clenches  his fists  and  flashes his wrists, all for  love.

For the  first  90  minutes  Tadap is like  a logbook on the  love-conquers-all-loutish-behaviour syndrome. Ishaana  is  a brooding brawny  hoodlum, almost an avatar of Jackie Shroff  in  Subhash Ghai’s Hero. The  camera  which seems  to love shooting itself in  the  foot in search of  frisky footage. is  a reliable ally for the  debutant hero’s  hero-giri.Bad Boys  love a good weed joint and high-speed bikes. Ishaana ticks  all the  boxes, and then some more.

Ahan as  Ishaana makes all the right moves. While  Pritam  tries to make  all the right noises. One colourful song  has  young Shetty and his leading lady singing and dancing in a carnival setting, before, ahem,  making out.

“The  kiss wasn’t right,”  rues Ramisa, the objectified  subject of Ishaana’s  adoration .She then proceeds to kiss  her lover-boy every five minutes for the  next  half an hour, to get it right.  By then , Ishaana is too far gone to care whether there is a world beyond the  bliss of the kiss  and the luck of the…never mind!

Sadly,  there is.  A bleak bloody  bestial world of broken dreams and shattered bones. Once the  misogynistic  angle of  the  bewafaa sanam sets  in to the  breathless plot, there is  no  respite from the reign  of  brutality. Through all  of  this madness and mayhem  the love-crazy  Ishaana keep s mumbling , ‘I love  Ramisa’.

If only his  Daddy(played with habitual  heft by Saurabh Shukla)  had  spanked his  son  hard in childhood. Maybe his sense  of  judgement  about women and  other  immediate matters would have been better.  Maybe then, we wouldn’t have to watch a film so steeped in self-gratification it ends  up  portraying the heroine as a  slut  .

Ramisa smokes, drinks, and  mouths murderous  anti-love  dialogues as if  she  was  a thinner version of  the  1970s’ vamp  Bindu. Tadap seems  stuck  in a time warp.  In one cruel moment of  insensitivity Ramisa describes Inshaan’s love as  ‘Telegram  during the  era of  Instagram’.

This seems  pretty much an apt description for  the  film: warring fathers(Saurabh Shukla versus  Kumud Mishra), bloodthirsty henchman, a  lineage –conscious  granny and a warmhearted café  owner Aunty who gives the love-crazed Ishaan the best advice  I heard in the  film. “Why don’t you move on?”

Yes, why don’t we all just move on hoping that  mainstream  Hindi cinema will one day,  grow out of its infantile fixation on  primitive  formulas and outdated  traditions.

Related Topics:TadapTadap movie review
Up Next